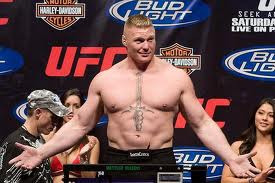 At this point you wouldn’t blame Brock Lesnar if stayed up at a home he owns in Canada for the rest of his life, so he wouldn’t have to hear all the rumors about him all the time. Today, another one got shot down.

It was announced during the UFC on Fox Conference Call this afternoon from UFC President Dana White that heavyweight superstar Brock Lesnar will not be retiring from his latest case of diverticulitis.

It was reported earlier in the week that Lesnar’s health was bad enough that doctors were advising him that he should retire due to the activity that training and fighting would take on his body.

“That’s ridiculous. It’s so far from the truth it’s not even funny”, said White in reference to all the rumor of the retirement issue. “The guy is working up on a farm up in Canada all summer. He’s 100 percent. His surgery went great. He’s 100 percent. He’s getting back into training here in the next couple of weeks”.

Lesnar had been rumored to be on the first Fox show since he is the UFC’s biggest draw, but White has stated that Lesnar will be returning to the octagon at the beginning of 2012.