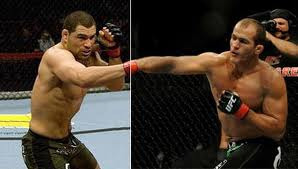 “We are going with the most prestigious championship in all of sports, the heavyweight title. So on November 12 at the Anaheim Honda Center, the UFC Heavyweight Champion Cain Velasquez will take on the No. 1 contender Junior Dos Santos on the number one network in America, Fox.”

Those were the words by UFC President Dana White during today’s conference call in announcing the main event for the first UFC on Fox show as UFC Heavyweight Chaampion will defend against Junior Dos Santos.

There were rumors flying all over the place as to what the main event was going to be. Rumors were circulating that UFC Middleweight Champion Anderson Silva would face Strikeforce Light Heavyweight Champion Dan Henderson, Brock Lesnar-Frank Mir III, Tito Ortiz-Rich Franklin and even Ortiz-Chuck Liddell III.

As like in the sport of boxing, the fans want to the heavyweights as they are biggest and the best men in all of the weight divisions. It isn’t any different with Velasquez and Dos Santos.

Velasquez (9-0 MMA, 7-0 UFC) last fought last October at UFC 121 where he defeated Brock Lesnar to capture the title. Velasquez has only had one fight go to a decision and that was in a very exciting fight against Cheick Kongo at UFC 99.

Dos Santos (13-1 MMA, 7-0 UFC) last fought in June at UFC 131 in defeating Shane Carwin by decision in a highly entertaining fight. He has only had two fights go to a decision and those were his last two with first one being a victory over Roy Nelson at UFC 117 last August. The question a lot of people are wondering is: Why these two guys?

You have a guy in Velasquez who is not only the UFC Heavyweight Champion, but has the best cardio in the division, great standup wth heavy hands and a former NCAA All-American Wrestler. In Dos Santos, you have a fighter who is regarded as the best striker in the heavyweight division, good Brazilian Ji-Jitsu that really hasn’t had to be used yet.

More importantly, you have two young hungry lions that a lot of pundits view as the two best heavyweights in the world today. They both put on great and exciting fights and who doesn’t like seeing the heavyweights battle it out for the biggest prize in the sport?

Can it live up to Ali-Foreman? We will find out November 12th.