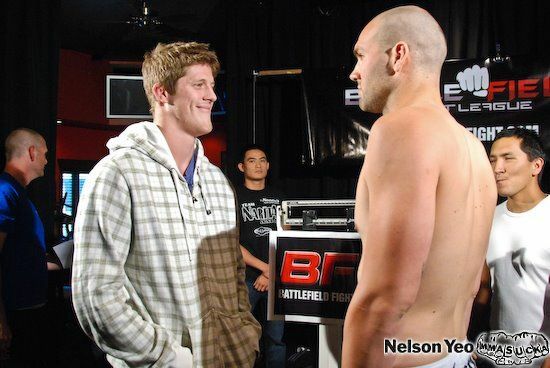 Last night Battlefield Fight League came back to Vancouver to showcase their amateur talent at the historic Vogue Theater on Vancouver’s Granville strip.  The promotion brought some interesting fights, new budding talents, and even a little controversy to make some interesting story lines for future events.  Here are my best and worse of the evening.

The fight team from Universal MMA came out the big winners tonight as they brought 2 exciting finishes to the cage.  Levon Kinley stopped Dillan Brown with a rear naked choke, and Terrence Chan grounded and pounded Tony Nguyen to a ref stoppage.

In my recent memory, the only loss Universal MMA has suffered in BFL was a very close split decision against the very tough Stuart Deleurme over Leo Xavier at BFL 9.  Outside of that loss, if you take a close look at the team, it is not hard to see why they have had consistent positive results.  Without exception, each of their fighters walks into the cage with a calm confidence that stems from faith in their coaching and training.  While in the cage, they follow their coaches’ instructions without hesitation.  When you add in the brotherhood dynamic that is developed through the blood and sweat of training, you have the recipe for their success that their fighters like featherweight Zack Koch,2-0 (who was scheduled to fight Ryan Moase but was unable to due to illness), bantamweight Kirk Tse, 3-0,  and welterweight Leo Xavier, 2-1, have followed and will continue to have success with.

I originally called this section the biggest loser to go along with the regular template of this type of article, but to be honest with you, Higginbottom is far from a loser as he is a true warrior to take his 3rd ever fight against a monster like Ash Mashreghi.  Even thought they met in the “middle” at middleweight, the former light heavyweight Higginbottom had an obvious size advantage against a welterweight fighter Ash Mashreghi.  To lose by tapout due to strikes at 35 seconds into the fight against a fighter who really should be two weight classes below you, could be a huge knock to your ego and your credibility.

Fortunately for Higginbottom, this is why we have amateur fights.  It give him a chance to regroup, and fill the holes he may have in his game and come back even stronger before going pro, especially if this was his first time doing a large weight cut.  Aside from that, we must not forget that Mashreghi was once a title contender and is still regarded as one of BFL’s top welterweights, so Smash’s win was not a huge surprise.  For Ash, this fight was a great fight to add to the highlight reel but I hope in his next fight he is further tested to prove he deserves another tile shot.

They only really had 2 weeks lead up to build hype of this main event heavyweight title fight, so the bad blood between the moving up in weight, middleweight belt holder, Micah Brakefield, and his heavy weight nemesis, Adam Santos, developed very quickly.  From trash talk on the prefight video, and Facebook, to the bird flipping at the weigh-ins, it was for sure there would be no love lost during this fight.  Unfortunately, the result was unsatisfying to Brakefield and many of the fans in attendance, as the referee may have ended the fight prematurely.

On one side, Brakefield was working for a single leg where he had taken several rabid hammer punches unblocked and unanswered from Santos, which prompted the ref to stop the fight.  On the other hand, the punches did little damage as Micah was unfazed from the punches and popped up quickly to contest the ref’s decision.   Either way it seems that there is unfinished business between the two fighters that Battlefield may be able to profit from on future cards.

This fight would be my pick for fight of the night, as both fighters did not hold back.  Marinos controlled most the first round as he scored the early takedown, and had the more dominant positions, but Takahara was extremely resilient against all of Marinos’ finishing attempts.  The last 30 seconds Takahara spent defending Marino’s rear naked choke.

The second round started with fireworks.  In the first minute both fighters attempted to punch and kick their opponents head off resulting a back and forth slugfest.  Eventually, Marinos began to have the better of the exchanges and ended up in top position to pound out Takahara to a referee stoppage.  This was a great showing by both fighters.

After being slammed to the mat, Levon Kinley spent the almost a round and a half in Dillan Brown’s Guillotine, waiting for Brown’s arms to burn out, or for Brown to make a mistake.   Kinley’s patients was rewarded at the middle of the second round when Brown went to adjust his submission attempt but Kinley wriggled free and took Brown’s back for the submission by a rear naked choke.

Best Tattoo of the Night: “the Normal (or Gaussian) Distribution Curve” of Probability theory on Terrence Chan.

As per Wikipedia The Normal distribution Curve “is often used as a first approximation to describe real-valued random variables that tend to cluster around a single mean value”. It’s not a dragon, a skull, tribal, kangi, or flames… This is an unlikely tattoo on the chest of newly minted mma fighter Terrence Chan.  Once you find out that his day job is a professional poker player, his systematical domination of resilient fighter Tony Nguyen makes sense.

For his first fight, the Universal martial arts student had a cerebral, well-calculated approach as he seemed to be 2 to 3 moves ahead of his opponent.  After unsuccessful with a deep arm bar attempt, Chan realized that he needed to use a higher probability techniques to finish a fighter like Nguyen has too much heart.  Chan decided he would need to draw a ref stoppage as Tony would not tap, so he put himself in a position to finish the fight by TKO.

Quote of the night: Jeremy Peever

Although the plans didn’t work as he lost to Josh Lewis in the 2nd round by guillotine that was set up by a big right hand, he definitely tried his best to impose that game plan, landing some hard shots of his own.