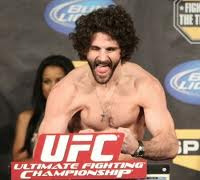 June 26th of this year will be a day that Charlie Brenneman will never forget. He was supposed to fight TJ Grant on the UFC on Versus 4 card in Pittsburgh and Grant had to bow out due to injury. Brenneman was without an opponent, but stayed on weight just in case a fighter pulled out. Then, the Nate Marquardt situation happened and Brenneman was back in the ballgame. The day before the card, the UFC offered Brenneman the fight with Rick Story and Brenneman jumped on it.

He went out and put on a great performance as he defeated Rick Story via unanimous decision and his life changed after that. With more people recognizing him, Brenneman(14-2 MMA, 3-1 UFC) kicked his training into high gear as he faces Anthony Johnson(9-3 MMA, 6-3 UFC) tomorrow night at UFC Live On Versus 6.

“Really hasn’t changed that dramatically,” Brenneman told us. “I took a week or two off and i got back right into the gym. There’s definitely more attention. One of the cool things was when I went to Philly for UFC 133, I got recognized 20 times more than times 20 than I ever had before. There were a lot of people who knew who I was and that’s great and everything. All that does for me, kind of puts my training into the next level. I realized that my actual goals and dreams are within reach, so its just more accountable than I hold myself to train in the way I think I should train.”

The welterweight division in the UFC is fully loaded with some of the best fighters in the world and the have big fights coming. You have Georges St.Pierre-Carlos Condit for the title and BJ Penn-Nick Diaz at UFC 137 later this month. Jake Ellenberger just defeated Jake Shields last month as well. Brenneman realizes that his fight tomorrow night is the biggest fight of his career and a victory could put him in the upper echelon of the welterweight division.

“Yes definitely, the Story fight was obviously a great opportunity,”said Brenneman. “What it did, it pout me in this situation. If I can get a win on Saturday night and that’s what propelled me. There’s a handful of guys in the welterweight division who are on a roll at the top. Jake Ellenberger got a lot of momentum right now. Still have Nick Diaz, BJ penn, Koscheck, there’s so many guys even Hendricks, even Story still. It’ll be interesting to see how it plays out, but the only thing I’m concerned about is winning. I win, I don’t have to worry about anything else. I leave all the work to Joe Silva and go from there.”

To listen to the interview go to sportstownchicago.com

For all the latest on UFC Live on Versus 6, stay tuned to MMASucka.com