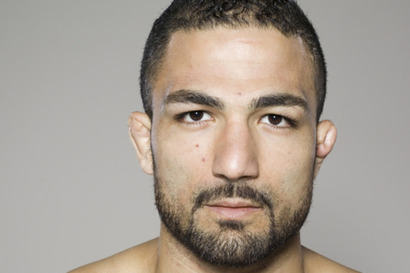 This is the tipping point episode in the show where all the little pranks, cutting remarks, fun and games add up to all hell breaking loose between fighters and coaches.  Right off the top of the episode we hear Diego Brandao tell Steven Siler, that he is going to cut their head off for no particular reason.  Brandao is one intense dude.  From the way the show is edited, every time their is an issue with Brandao they make him look like a ticking time bomb of emotion waiting to cut someone’s head off.

Back at the house Mayhem found out that John Dodson is the mole on the team that’s been tipping off team Bisping with the fight picks.  Mayhem devised a plan to make Dodson give the wrong match up to team Bisping to throw off their fight preparations.  They told Dodson that the upcoming match will be Brandao versus Siler, but ended up announcing Akira Corassani versus Dustin Neace instead.  This will make hot headed Brandao have to wait a week to finally fight and blow off his pent up animosity to Siler.

Also at the house, Dustin Neace received a present from Mayhem.  Its a cowboy hat with the letter “B” on the front for Neace’s nick name, “Beast”.  Unfortunately, the present is not taken kindly by Josh Ferguson as he says that Neace is a “Swagger Jacker” for stealing his cowboy hat styling.  That night Ferguson stole Neace’s hat as a prank.  When Neace finds out his hat is missing he goes ballistic and believes it is Akira that stole his hat.  He starts taking all of Akira’s belongings and food and trashing them.  His rage spills over to the training center where he dumps all of Akira’s training gear all over the team Bisping dressing room.

All this anxiety between Neace and Akira boiled over at the fight announcements when they clash heads during the stare down, and eventually Neace tackled Akira causing the coaching staff to get involved and prevent their fighters from getting tossed off the show.  While all this is going on, Bisping and Mayhem had a verbal exchange after Mayhem pushed Bisping off of Neace, while Bisping was trying to stop the fight.

Neace versus Akira became the most controversial fight of season, so far.  Neace caught Akira in a deep heel hook in the middle of the first round, and Akira looked like he tapped, but the referee Herb Dean didn’t see it, so he let the fight continue.  Almost everyone on team Mayhem was screaming that he tapped, but Akira kept fighting through the submission and eventually rolled out and escaped.  Neace was livid between rounds because he felt the fight should have been over, and stayed standing in the corner complaining to his corner, but not recovering properly from the previous round.  In the second round Neace’s fatigue began to set in as Akira was able to maintain the top position during all the ground exchanges.  Akira also dropped Neace once with a clean punch to the face.   Akira secured the first win for team Bisping.

Akira Corassani defeated Dustin Neace via majority decision at 5:00 of round 2.

After the fight, Akira decided to celebrate by walking up to Neace’s corner and mimed an imaginary machine gun mowing down Neace and his coaches.  This caused Keith Kizer from the Nevada State Athletic Commission to threaten to kick off Akira from the show with the unsportsman like conduct.  I have never seen Kizer in action like that, but it made Akira shut up pretty quick.  On top of that, It caused another shouting match between Bisping and Mayhem, especially since Mayhem sprayed Bisping with water.

As the fighters were leaving the training site, we see Mayhem’s car being towed off for parking in a handicap spot, all care of team Bisping.

After watching all this, Im pretty excited to see what happens next week especially since its going to be a two fight episode! See you all then!