Joe Lauzon (21-6) is going to Japan. He has a date with Anthony “Showtime” Pettis (14-2) at UFC 144. Joe is one of those guys in the sport that you love to cheer for. Back in October at UFC 136 many people wrote the Bridgewater, Massachusetts native off before he even stepped into the cage against Melvin Guillard. Forty seven seconds into the first round and Guillard found himself wrapped up and choked out. For Lauzon it was a statement fight.

Not only did Lauzon derail the train, but his performance made people sit up and recognize that you can’t count your chickens before they hatch in the unpredictable sport of MMA. That fight made everyone re-notice Joe Lauzon.

Lauzon is a kid that is use to being over looked. When he entered the UFC back in 2006 he was supposed to be fodder for Jens Pulver. However, just like the Guillard fight, all Joe needed was 47 seconds to dispose of the former lightweight champ with a vicious KO victory. Since that time he has gone 8-3 in the UFC, not bad for a guy who studied computer science at Wentworth Institute of Technology and eventually became a network administrator in Cambridge.

My life has really turned 180 degrees. When I was doing IT I never really told anyone what I did outside of work. I wasn’t in the UFC yet, but sometimes I would come into work with black eyes and scratches on my face. However, for the most part I was able to fly under the radar a little bit. That was nice because I didn’t want to have to answer a million questions about it every single day. It was before I was in the UFC and I didn’t want to ask people have you seen the UFC? Well I’m not in it, but I do that UFC stuff. Now it’s the complete opposite. It’s a much easier explanation. Have you seen the UFC? I’m in the UFC. I do that. It’s much simpler to explain.

I dare anyone to call Joe Lauzon a nerd. He’s the type of guy who can come to your house and defrag your computer and put you in a whole world of hurt at the same time. When Joe isn’t training he is still preparing himself for battle of a different kind. 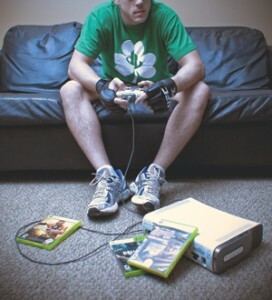 Right now I’m playing Modern Warfare Three a lot. I play a ton of Xbox. It’s funny I think some people think I avoid training to stay at home and play video games, which is not the case. When I put in a long day of training and I’m looking for some down time, you will most likely see me putting in some time on my Xbox.

Beware if you are playing online and you see someone named Joe Lauzon, you might want to tone down the trash talking. That goes for the new UFC Undisputed game too.

I have played UFC online, but it’s frustrating in that I don’t like to lose, especially when I hear some kid start trash talking me afterwards. So I try not to play that game online. But I do play with my buddies all the time though.

Instead of asking Joe about his training for Anthony Pettis, I couldn’t resist getting into the Apple or PC discussion. These are the tough questions that need to be asked.

I’m an Apple guy but I worked with PC’s for a long time. I went to school for computer science and started working in network administration where it was all pretty much a PC network. But overtime we started migrating to Apple a little bit more. So I tried to learn as much about Macintosh as possible so I wouldn’t become ignorant. But after a couple of months I was hooked and I didn’t want to work with any other kind of computer. I now have all the toys, like Apple TV, I-Phone, I-Pad…I have them all.

When you talk to Joe you forget that he is a finely tuned athlete. He comes off as a very quiet and unassuming guy. He is just a regular dude who you could chill with and let win at Madden. So it was time to get back to asking questions about fighting that every journalist asks, for instance how is the weight cut coming?

I’m eating hash browns right now. I’m really lucky that I have a fast metabolism. I try to eat good food before I train or workout but I can pretty much eat what I want. It helps though that I’m not big on junk food like chocolate or candy or stuff like that. But I do like pasta, chicken and steak so that I can eat and not really worry about it.

That was a stupid question to ask because not only is he smarter than most of us but he also has some crazy metabolism that doesn’t allow him to get fat. What the hell is wrong with this guy? Before jealousy and envy kicked in, I wanted to know how life has been with brother Dan. If you don’t know there have been some public tiffs between the two brothers over the last few years.

Things are much better with Dan and I now. I think a lot of stuff happens and brothers always seem to fight in general. I think with us when it happens, it becomes a bit more public because of what we do for a living. We’ve been doing great. We’ve been training hard and there haven’t been any blow-ups. It use to be that we would be grappling and things would all of a sudden get heated and next thing you know one of us is trying to knee the other guy in the head. It has definitely taken a turn where things are much more friendlier and we get a long much better.

One of the problems that arose between the two brothers was Joe’s frustration with Dan’s apparent lack of commitment to training. But according to Joe, that is a thing of the past.

Dan’s training is much better. I use to tell him to do more and more, but to him he didn’t want to listen to me when I told him how he should be training for a fight. As soon as I stopped telling him what to do, he automatically started to do more on his own. He now has taken more responsibility for his own training and he’s at the gym way more now so I’m really happy about that. I think Dan will be back in the UFC. He has put together four dominant wins in a row and I think he will be back really soon.

For a guy who would rather do his talking in the Octagon, you can imagine how fame can be an intrusive stranger. It’s not always easy to walk around and have people come up to you while you’re eating or walking your dog. Everyone wants a picture; everyone wants a piece of you. It has been one of the hardest things for Joe to get use to.

It’s been a big adjustment for sure. I’m very much an introvert. I’m pretty quiet and shy. I’m not super talkative. I’m just really quiet in general. It has been something to get used to when people just randomly come up to me and start talking. But I think I’m getting better at that. For the most part it has been pretty cool.

With all the outside pressures and hard training regimes, Joe finds solace in training, video games and computers, but his true past time is not other sports, it’s television.

I watch a good amount of TV. I really like Dexter. I’ve been watching the Walking Dead, which is awesome. Sons of Anarchy is a great show. Video games and TV are so good for me because I train all the time and I really need the rest. For me to go out and play football or hockey isn’t the best idea.

For now, Joe is in Japan getting ready for his match in the Saitama Super Arena at UFC 144. Anthony Pettis is no joke and will be a tough test. But behind all the flash Joe sees a complete fighter in Pettis.

I think Pettis is good everywhere. He has good Jiu-Jitsu and has good hips where he can move from arm locks to triangles, which makes him really dangerous on his back. He’s been working on his wrestling. He’s also good standing up in that he’s really flashy and can throw some jaw dropping moves like the cage kick. He’s just really good everywhere.

There is no other fight on Joe’s mind. This is just the next one. He will probably be over looked once again. Sure he has some losses, but he is still growing in the sport and for now it’s just UFC 144 and not the past.

I’d like to rematch everyone that I have ever lost to. Earlier in my UFC career I’d hang onto stuff like that a little bit more. Now, I have the mentality of whoever is next. I don’t necessarily have to fight to avenge losses, I just want to go and fight better guys.

You’ll probably see Joe in Japan checking out the tourist sites or on his laptop answering questions on some Mac networking forum. But don’t let that fool you; he is a fighter in the true sense of the word. Maybe that is all part of his plan, the strong silent assassin who just wants to make the most of his UFC career.

You know it’s nice to be able to make good money fighting. But if that was to all end today I’d be okay with that.

This Saturday Joe is looking to rip out Anthony Pettis’s hard drive and render him useless. Don’t miss it.