Two of the middleweight’s best, Alan Belcher and Vitor Belfort could be colliding at UFC 153 on October 13 at the HSBC Arena in Rio de Janeiro, Brazil.

Belcher made mention a few times late last night on twitter that he wanted the fight with Belfort. 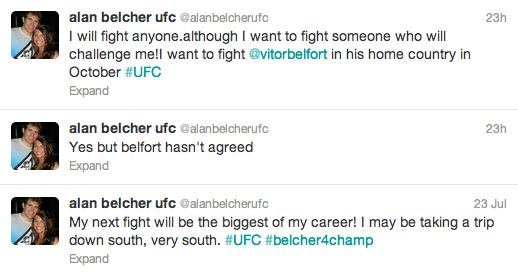 He then followed up with Tatame.com and said it was all in Belfort’s hands now. Almost immediately after, Belfort responded via his twitter account.

It sounds like UFC President Dana White has some other options open in the middleweight division with this potential upcoming bout at UFC 153 in Rio.

While the bout is not yet confirmed expect for it to serve on the main card. UFC 153 will be headlined by a featherweight championship tilt between Jose Aldo and Erik Koch, also a light heavyweight scrap between Quinton “Rampage” Jackson and Glover Teixeira.