Here is a revelation. Miesha Tate is very attractive. I’m sure most of you agree with that in depth assessment, which is not a bad way to start off a column.

Here is another nugget of enlightenment, Miesha Tate is also a talented fighter. The former Strikeforce champ is lurking in the shadows biding her time and waiting for another shot at reclaiming glory. Tate believes that if she beats Judie Kedzie at Strikeforce: Rousey vs. Kaufman, that she is next in line to try and get her belt  back.

If I win I think definitely deserve a shot. I’ve been signed with Strikeforce the longest out of any of the females they’ve had so I have a commitment to them and I feel they should have the same commitment to me. I think having a good performance against Julie would make a statement that ‘Man, not only is she back, but she’s back with a vengeance.’

The last time we saw Tate in the Strikeforce cage was back in March at Strikeforce: Tate vs. Rousey in what was the arguably biggest Women’s MMA match in the history of the sport. In the end we didn’t see Miesha’s arm get raised but instead bent like something out of a Looney Tunes cartoon and thus began the “Rowdy Era.” You never want to lose, but for the Tacoma Washington native, insert truthful cliché here.

I’ve got a lot to learn and I’ve had a lot of growth since that last loss. It was the first time dealing with the media and Ronda might have had a little bit more of an advantage with that having done the Olympics and countless amounts of grappling tournaments where she was competing on a regular basis. It was all new and fresh to me

Being thrust into the limelight can make anyone uncomfortable. Athletes like Miesha are creatures of habit and if that routine is disrupted it can challenge the idea of being mentally focused. However, that being said, going from Main Event status to preliminary card can also test one’s humility.

I’d rather be on the main card but part of me thinks is the fact that I’m a female. That said, I’ve had so much going on and it was kind of stressful being the main event last time out; it can be overwhelming. I think the amount of time I had to put into the rehabilitation and training and getting my mental focus I think it’s been good for me to not have to do all that other extra work. I’m kind of thankful that I didn’t have my plateful with all that but in the future I definitely want to get back to that point.

A win might not be enough to secure another shot at Rousey to enact revenge. There are rumors that another larger shadow lurks in women’s MMA looking for a big fight; her name is Chris “Cyborg” Santos. Recently on the MMA Hour with Mauro Ranollo, Cyborg called the current bantamweight champion out and is hoping to get a shot once her suspension is up. There have even been Gina Carano rumors floating around. If Ronda wins this weekend, her dance card might fill up quickly and for the first time in the history of mankind, Miesha might be without a dance partner.

Ronda…Ronda, Ronda! Here I am writing about Miesha and her arch nemesis’s name keeps coming up. Is Rousey’s star burning to fast and too bright for women’s MMA? Or has it been a blessing in disguise?

It’s good that we are getting more eyes on women’s MMA but I don’t really like the way she [Rousey] represents us, I think that she’s way too cocky, I think that she’s hypocritical and I think she’s kind of trashy like calling out people who aren’t even fighters. To me it’s not the image that I want painted for women’s MMA

I don’t want her as the face of it because I don’t think she’s a good representation, most of us are not like her in the way that she’s so outspoken to the point that it’s obnoxious. People seem to like the drama and the people that don’t like her will watch her to see what the next dumb thing she’ll say so it’s kind of a catch-22 because it’s more attention but not the sort of attention I want to see.

Yet, there is the conundrum. Image. In Women’s MMA branding might be a bigger deal than the men’s side of things. At this level you have to ask is one’s skill set secondary? There is nothing better than shiny packaging to create excitement. Miesha believes that is why another former bantamweight champion in Sarah Kaufman sometimes gets overlooked and why Rousey gets all the attention.

You gotta compare the two and to be honest, Ronda’s got a lot more attention because 1. She’s an attractive girl and #2. She’s very outspoken so a lot of people love her and a lot of people hate her but either way she’s turning heads.

Kaufman has floated under the radar for a long time because she doesn’t play up her feminine side and she’s also quiet. She doesn’t stir the pot and create interest, she’s just different, she comes to fight and that’s pretty much it. That’s fine, there’s nothing wrong with that but you can look at the two and it’s obvious to see what will get you further.

This Saturday night is another Strikeforce event with some real star power with another Main Event to showcase the ladies. For Miesha, standing in her way of continuing the journey back up to main card, is a very tough Julie Kedzie who cannot be overlooked. Yet through visualization victory is in sight.

I would like to get a first round TKO or a knockout, Julie has never been finished by strikes so that would be kind of cool, she’s been fighting a long time, has a lot of decision wins and knows how to win the rounds. Julie is a veteran but I can’t be too overzealous or whatnot but I want to push the pace, I don’t want it to go to the decision, I want to have a strong comeback and I want to have a vicious comeback. I want to really put on a good show, that’s what I’m hoping for.

In the Main event is Rousey defending her bantamweight title against Kaufman, a bout that Miesha will be observing with great interest. 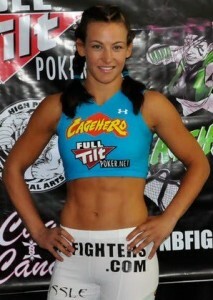 For my own personal interest, yes I’m cheering for Ronda. I want to be the one to beat her, but I can say that there’s a part of me that would like to watch her get beat up but I would definitely like to be the one doing the beating. [laughs]

For full MMA coverage and the latest news, keep it locked to MMASucka.com.