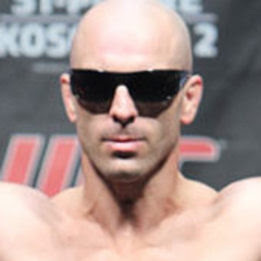 This weeks “Fight Music” we thought we would take you into the mind of UFC fighter Sean Pierson.

Pierson has just gotten done training for his upcoming bout against Lance Benoist at UFC 152. While training he has to go back in time to get hyped up.

“I like anything hip-hop. We can go from the new stuff, you know, Drake is a Toronto boy so I listen to Drake as much as some people are going to yell at me for saying that, but I like Drake. Lil’ Wayne has got some stuff out there. Truly, if you want to get me amped up, you’ve got to go back to the older stuff like older Dre, Gangstarr and even the Fu-Schnickens. When I hear old school stuff on the radio, I know every single lyric because that’s all I did as a kid was listen to music. When I’m shadow boxing and all this stuff, I’m rappin’ along, I’m grooving along and I’m having fun. Anything old school to me is hype music.”

Make sure you check out Pierson vs. Benoist this Saturday night live on FUEL TV on the UFC 152 preliminary card.