April 9, 2005. That was the night the game changed. The UFC, having struggled to gain mainstream acceptance for years, was holding the finale of their reality show gambit The Ultimate Fighter and pitting two prospects against each other for the chance to win a UFC contract. The two engaged in a war remembered to this day and left Forrest Griffin as the winner of an ultra-narrow decision. Dana White was so blown away by what he had just seen that he insisted the fighter on the other end of the decision be given the same contract Griffin had earned. That man was Stephan Bonnar.

Bonnar decided to walk away from the sport this week, his last fight being a pay-per-view main event against the best fighter alive, Anderson Silva. All in all, not a bad way to cap a career. He leaves the UFC with an 8-7 record, which belies his importance to the company. There are many fighters with better records that will not be as remembered as the man nicknamed ‘The American Psycho’ (for his stint in an anger management program) surely will be.

That fateful April night was Bonnar’s first real exposure to the masses, but he came with an established pedigree. He was a Golden Gloves-level boxer and held a purple belt in BJJ under the legendary Carlson Gracie. He had been toiling on the independent fight circuit since 2001, getting wins over notable names such as UFC veterans Brian Ebsersole and Terry Martin and even travelling to Brazil to fight future UFC Light Heavyweight champion Lyoto Machida. Yet he was so unknown to the world even during the production of that first season of TUF that he was left back at the fighter house when the rest of the cast were taken for a night out, and Bruce Buffer famously mispronounced his name in the Griffin fight as “Steven Bonnar”. That night, however, was the last time any UFC fan didn’t know Bonnar’s name.

The Bonnar-Griffin fight has been discussed ad nauseum, but for good reason. The two engaged in a war so captivating that viewership for the event surged to as much as eight million viewers. The only explanation for the sudden jump in viewers was that people literally had to be calling their friends and saying “you have to see this”. Looking back on the fight and what it did for thew UFC, Dana White called it “the most important fight in UFC history”, a mantle yet to be usurped.

Coming out of TUF, Bonnar was looked at as every bit the prospect Griffin was given the nature of their fight and the fact that many thought Bonnar should have won the decision. Bonnar seemed to live up to the early billing, winning his first three straight fights after TUF over fellow TUF 1 alumnus Sam Hoger, a game James Irvin and TUF 2 competitor Keith Jardine. Bonnar was also connecting with the fans with his natural charisma and often self-effacing humour, becoming a favourite in segments on UFC.com and a guest spot on colour commentary during the Forrest Griffin-Tito Ortiz fight.

It was only after being matched against TUF 2 winner and future UFC LHW champion Rashad Evans that Bonnar tasted defeat again. With Bonnar losing to Evans and Griffin coming off the aforementioned loss to Ortiz, Zuffa decided that the time was right to match the two up again. Griffin-Bonnar 2 was the co-main event under the Chuck Liddell-‘Babalu’ Sobral title fight. The rematch was far more tactical and cautious than their previous encounter, and Griffin again took home a decision victory.

It was in the aftermath of that fight that Bonnar suffered the first major setback of his career, testing positive for the steroid Boldenone and receiving a nine month suspension from the Nevada State Athletic Commission. Bonnar claimed that he used the steroids to help recover quickly from a nagging elbow injury. Now having the time off, Bonnar decided to have surgery on the elbow, repairing two tendons and removing bone fragments.

When Bonnar returned from the suspension, he sought to make a statement, notching 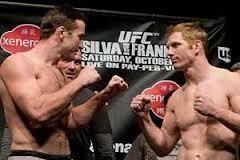 two dominant stoppage victories over Mike Nickels and Eric Schafer. But injuries again sidelined ‘The American Psycho’, as he withdrew from a proposed fight against Matt Hamill due to a serious knee injury. It would be almost a year and a half before he stepped into the octagon again.

Upon Bonnar’s return, he was matched up against one of the brightest prospects under the Zuffa umbrella. His opponent only had one fight in the UFC but was already thought to be the future of the division and perhaps the company, putting him against Bonnar would show if the hype was reality. Although Bonnar gave his traditional gutsy effort, his opponent’s unorthodox attack left Bonnar without answers. That man’s name was Jon Jones.

UFC 100 was the UFC’s biggest event to date and it seemed only fitting that a man with Bonnar’s history and reputation be asked to participate. He was matched against UFC Hall of Famer Mark Coleman in what was thought to be a favourable match-up for Bonnar. But Coleman defied Father Time and notched a unanimous decision victory. After the fight, many wondered aloud whether Bonnar still had what it took to compete in the UFC and whether his best days were behind him.

With something to prove, Bonnar returned to his full-speed ahead style at UFC 110 against Krzysztof Soszynski, who entered the fight having won three of his four fights under the UFC banner and holding two Submission of the Night bonuses. The two went toe-to-toe in a fight that looked destined to win ‘Fight of the Night’ honours before the bout was stopped early in the third round due to a cut on Bonnar’s head. Although the replay showed the cut was caused by an accidental clash of heads, it was ruled a TKO win for Soszynski. Bonnar appealed the decision, but was ultimately unsuccessful.

The two met again at UFC 116 and picked up exactly where they left off, in a wild brawl with both men landing hard shots. This time Bonnar was able to score his own TKO victory over ‘K-Sos’, and both men walked away with ‘Fight of the Night’ bonuses. The fight showed that Bonnar still had something left in the tank and could still compete at the UFC level.

Following a win over Igor Pokrajac, Bonnar was again felled by an injury, this time tearing his MCL. When he returned almost a full year after the Pokrajac fight, he was dominant in a one-sided decision over Kyle Kingsbury.

It was around this time that Bonnar began musing about retirement. Injuries had 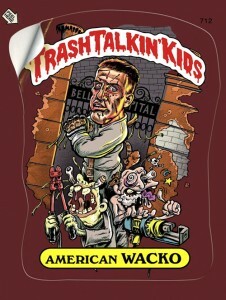 taken their toll, and Bonnar was involved in ventures outside of fighting; namely a successful stint as a WEC colour commentator, as well as analyst duties for ESPN and Fuel TV. His company “Ngauge” has produced the popular Cabbage Patch Kids-inspired “Punch Buddies” t-shirt line.

Still, with seemingly one foot out the door, Bonnar wanted to go out with a bang. He openly campaigned for a TUF coaching slot against his old fiend and opponent Griffin, promising in the ensuing fight that he would “not go for any takedowns, not block any punches, and always move forward.”

The Griffin trilogy match never materialized,  but Bonnar did get his wish of one last great hurrah and also fulfilled his odd request of a fight against someone with “more Twitter followers than [him]”. With the UFC 153 card in jeopardy due to injuries to feature attractions Jose Aldo and Rampage Jackson, Bonnar agreed to step up on short notice and fight the number one fighter on the planet, Anderson Silva.

Although the Silva fight ended in a one-sided loss, Bonnar showed the guts, tenacity and perseverance that became his hallmark in the UFC and will ultimately define his legacy. He walks away from the UFC being quite possibly the most popular fighter to never wear championship gold. He embodies the kind of warrior spirit that draws admiration from fighters and fans alike, and has the affable sort of personality that makes him seem to the viewer that he’s one of the gang from the corner pub. While some may take issue with his record, it’s worth noting that all but one of his losses came to fighters who have worn UFC gold, and the only man to finish him is quite possibly the greatest of all time.

It may be the right time for Bonnar to walk away, as he again tested positive for steroids after the Silva fight. While this will understandably leave a sour taste in the mouths of both fans and media, time heals all wounds and absence makes the heart grow fonder. The memories of Bonnar inside the cage will trump the controversy of a second positive steroid test.

He now gets to spend more time with his wife, and welcomed his first child into the world last week. It is all but a certainty that we will see him on-screen during a UFC telecast again, as Dana White promised both Bonnar and Griffin “jobs for life” after their first epic encounter. Perhaps the best compliment one can give Bonnar is that he left the UFC a much better place than he found it. Thanks for the memories Stephan, you’re definitely the most endearing ‘Psycho’ we’ve ever known.