Everyone is talking TRT and Marijuana again. One you can put in a cookie the other not so much. Maybe MMASucka’s Jeremy Brand has tried to blend the two in his fancy Blendtec blender and make a juice, but in my opinion, both “drugs” are completely different and should be treated as such.

You have the unfortunate Pat Healy incident where he lost a crap load of money ($130,000 to be exact) and was suspended for 90 days for testing positive for “Mary Jane.”  Sure there are many, including myself, who love a good puff from time-to-time.  I have always banged the drum that reefer should not be considered a performance enhancer; just listen to MMASucka Radio and there is proof enough that it does not enhance anything. I’m sure one day that archaic rule enforced by athletic commissions everywhere (maybe not in Jamaica) will change, but for now it’s just that… a rule.

Pat Healy should have known better but you can’t help but feel for him. What transpired was a stiff penalty that will undoubtedly sting and it has sent a message to pro fighters across the board. Maybe that’s a good thing. If you smoke dope, don’t be one, and smoke while you are training for a fight. Healy has apologized for the incident, but the question still remains, how does a fighter smoke one month out from a bout and have that doobie be considered performance enhancing? Let the debate continue until a commission somewhere has the balls to change the rules.

My stance on smoking weed has always been clear, but my thoughts on TRT (testosterone replacement therapy) usage has been somewhat on the fence. I don’t normally like to be sitting on the fence on a subject; as anyone knows your ass really starts to hurt after a while. However, my opinion on TRT has changed to the side of ban it! 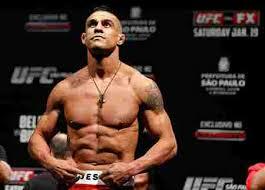 There hasn’t been a real poster boy for the “ban it argument” until Vitor Belfort. That man has obviously used it to his benefit in that he will only fight in Brazil so that other commissions like Nevada, will not stop him from doing so. I did some research and to be honest, there aren’t a lot of guys abusing TRT. In fact banning it would probably only effect a very tiny percentage of fighters in the sport. If someone is at the pinnacle of the sport and fighting in the UFC, the only reason he or she would need to use TRT  is because they abused steroids at some point in their life. The other reasons for the therapy are related to maybe your gonads didn’t develop properly or were cut off.

Vitor Belfort can claim that his strength comes from Jesus, but it also comes from a liquid in a vile too. It’s a performance enhancer in the truest sense of the word, and if you are a fighter who wants to use it to cover up sins from the past, maybe there is no bigger billboard on why not to abuse PEDs when you are young. Thank you Vitor Belfort for showing the masses the effects that steroids have on an aging athlete. For now Belfort will hide in a jurisdiction that will allow him to cheat, but unfortunately he is still operating within the rules. It’s time for the UFC and athletic commissions everywhere to step up and ban the procedure across the board. Unfortunately, the damage Belfort did to his body in the past will not amount to the damage he is currently doing to his legacy.

Think about it and let us know your thoughts. Do you agree with me? Whether you agree or disagree now is your chance to make your opinion known. Comment below, and the best response will win a Punishment Athletics T-shirt. Make sure to check out Team Punishment and cash in our promo code PA99 and get 20% off  merchandise.

You can listen to Trevor on MMASucka Radio heard weekly on MMASucka.com. Follow him on Twitter @tdueckMMA