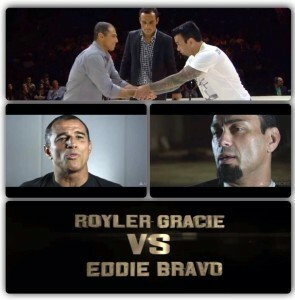 Metamoris 2 is taking place tonight from UCLA’S Pauley Pavilion in Los Angeles, California. Prior to the intermission a video streamed with Royler Gracie and Eddie Bravo talking about their infamous ADCC 2003 match-up. It was then announced that the two would finally be meeting again later this year at Metamoris 3.

Promoter Ralek Gracie met both men on the mat and stated that Bravo “Built his name off of beating my uncle.”

Gracie and Bravo were expected to meet at ADCC 2011, however it never came to fruition.

Their first match-up was one for the ages and basically built the career for Bravo. It took the man behind “The Rubber Guard” just over 8-minutes to lock up a triangle choke and land the biggest victory of his career.

Since their match-up Gracie has focused on his MMA career; he has gone 5-5-1 with his last fight being a split decision loss to Masakatsu Ueda at Amazon Forest Combat 1 in 2011. While Bravo hasn’t competed in BJJ since the ADCC’s in 2003 – however he has launched his giant chain of BJJ clubs called “10th Planet”.

For those of you that have not witnessed the first encounter between Gracie and Bravo check it out below.