The following musing only represents my thoughts and not necessarily the thoughts of you or anyone at MMASucka.com. However, that is what MMA Musings is, my opinion and you are welcome to agree or disagree, but come correct!

Congrats to a bloke named “Truesday” on Reddit. You can read his comments here from the last MMA Musings. He won himself a nice T-shirt from a new company called Fight For Something. Make sure to check them out. Great cause, great clothes.

Oh, that Bellator, trying to trick us all with their Rampage Jackson vs. Roy Jones Jr. pretend boxing match talk. How droll. Just when I thought Viacom’s Phil Lalonde and Bellator’s Bjorn Rebney couldn’t be any dumber, they totally redeem themselves! Okay maybe not.

What a swerve, here we were all thinking it was going to be a boxing match to Main Event Bellator’s first PPV. I love how Rampage said with a straight face that he didn’t know how that rumor was started. Riiiiggght. Rampage Jackson really needs another movie role because his acting is so convincing. 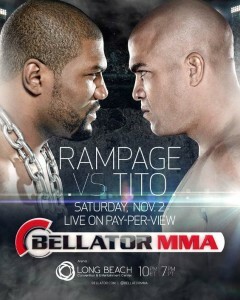 Let me get this straight, it is now going to be Tito Ortiz vs. Rampage Jackson headlining Bellator’s baptism into PPV? Two washed up athletes, who probably should have fought years ago while they were still in their prime, are now trying to sell us on the idea that this fight should matter now and that they still have something left in the tank. Is Bellator starting up a senior division? To be honest that is not entirely a bad idea. Just saying. Let me guess, Frank Shamrock gets the winner? Is Randy Couture looking for a fight?

I don’t mind the match up because not every fight has to be for a title or have meaning. It is an interesting enough bout, but to be honest, it’s pretty tough to get excited about it. Both fighters have name recognition but they haven’t been exactly lighting the MMA world on fire with their performances over the years. However, we are all supposed to forget about their losing ways and get jacked up for this fight like the last five years didn’t happen.

Another Viacom entity on Spike is Impact Wrestling which is probably the worst professional wrestling program that has ever been on Television. It’s too bad because when they were coined as TNA (Total Non Stop Action) Wrestling and focused on the wrestling part of things, they had a pretty good program if you are into the pro wrestling entertainment stuff.

Dixie Carter who runs the wrestling promotion has decided that she no longer cares about quality and has decided to sell out pro wrestlers for MMA athletes. They just fired a bunch of talent so they could pay for King Mo Lawal and Rampage Jackson who have no idea how to wrestle for entertainment purposes. Guess what? They will probably have to fire more great talent to afford Tito Ortiz’s contract because Tito is now part of Impact Wrestling too!

Is it just me or was that really awkward to watch? To be honest who cares, but you can see what Viacom is doing here. They are going to promote the Ortiz vs. Rampage fight on as much programming as they can. They will probably have some sort of “Primetime” show on Spike TV where we will get to see behind the scenes of these two guys training. Yawn…seen it before. Hey look it’s Tito in Big Bear and Rampage telling us that this is the hardest he has ever trained before, however, they both have injuries that we will hear about after the fight.

Bellator will continue to promote on Impact Wrestling which I mentioned, and they will probably have more things coming on a Bellator telecast or Spike program in the not too distant future. They will promote the living hell out of this fight and you can’t blame them. Just forget and have amnesia when it comes to Rampage and Tito’s last few fights in the UFC.

Bellator’s PPV idea will be a huge risk and maybe one nail in the coffin. I believe they are forced to put on a PPV because they have to show that they are real competition to the UFC so that they can back their case in the Eddie Alvarez contract debacle. Don’t even get me started on that.

The only issue I have is why they are rushing into PPV when they can’t even get positive ratings on Spike TV? Let’s just say that Bellator hasn’t been doing as well as they thought on Spike and their reality show is a complete rip off of other “reality” shows like “The Voice”. Blaming the NHL playoffs for the low ratings or moving the telecast to Thursdays instead of Wednesdays isn’t going to help. Sure the hardcore fans will watch, but with the amount of UFC being thrown at us these days, the casual fan doesn’t have an appetite for more MMA. We are MMA’ed to death.

As talented as Bellator’s Lightweight Champion Michael Chandler is, he should fire his agent right now. If Chandler wants to be considered one of the top lightweights in the country, signing a long term deal with Bellator isn’t going to anoint him any top five talks. If you want to be the best, go and fight in the UFC. Waiting around in purgatory and fighting guys who nobody has heard of isn’t going to draw any praise. Gilbert Melendez anyone?

Instead Viacom’s Phil Lalonde is making it rain at the whore house and Chandler saw the dollars and decided to sit on money instead of competing against the best and making a good living that way. That’s fine, but for the next few years if anyone says that Chandler deserves to be in the top five of lightweights in the world, I will slap them. Chandler is making money and playing it safe.

I have never been a big fan of Bellator…can you tell? I respect the fighters and it’s another place where guys can compete. I do think their tournament format is gimmicky and it got boring really fast. With the way modern fighters train and the quick turnaround in fights, too many guys get injured. When Viacom brought on Bellator and put them on Spike there was a genuine excitement that they could become the #2 promotion in the world. Sure they have money to spend, but knowing where to spend it is a bigger deal than just throwing it around to see who grabs it.

In my opinion, there are better promotions out there. Bellator will get all the attention for now, but it’s promotions like ONE FC in Asia that are doing things properly. However, Bellator has the financial backing  and so they will be pushed as the UFC’s number one competitor. The problem is…they aren’t. As soon as the people at Viacom realize they can’t compete with the big show, the sooner they can move on and carve out their own niche.

For now, the people at Viacom can do whatever they want, but I have seen this movie before. Bring on aging veterans; spend copious amounts of money and fail. It’s been done before. Phil Lalonde is so hell bent at fighting the UFC that Bellator will end up falling flat on their faces.

What say you? Are you excited about the Ortiz vs. Rampage Fight? Agree or disagree with me, comment on Facebook, Twitter, Reddit, the Underground or the comment section below and you could win some cool  Revgear “Tekko” MMA gloves. If you train, this is a pretty wicked prize, so make sure you comment and pass it on.

You can listen to Trevor on MMASucka Radio heard weekly on MMASucka.com. Follow him on Twitter @TrevDueck