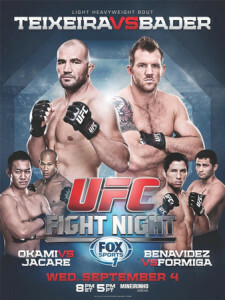 The UFC returns for a middle of the week card for Fight Night 28 in Belo Horizonte, Brazil.

The main event at UFC Fight Night 28 is a light heavyweight battle between Glover Teixeira vs. Ryan Bader. Yushin Okami and Ronaldo Souza square off in the co-main event.