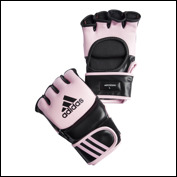 RFA President Ed Soares today announced that in honor of Breast Cancer Awareness month, Resurrection Fighting Alliance is foregoing its traditional red and black logo and will take it pink along with the adidas gloves that fighters will wear in the Octagon on Oct. 25 at RFA 10 in Des Moines, Iowa.

“We are taking the RFA pink in honor of Breast Cancer Awareness month to raise awareness throughout the MMA community,” said Soares. “All of our fighters will wear pink adidas MMA gloves, the RFA logo will turn pink and you’ll see pink cues inside the Octagon at RFA 10. Breast cancer has hit the families of many of our executives as well as our fighters, so we are all coming together on October 25th to support this cause.”
In addition to being the first RFA event to go pink, RFA 10 also marks the first time ever that adidas has created pink MMA gloves.
Said Raul Montolfo, national director of sales and product development for Double-D/adidas Global, “In honor of Breast Cancer Awareness month, we decided to create the first ever pink adidas MMA gloves to show our support and to give the fighters a way to represent this great cause at RFA 10.”
Additionally, main event fighter Mike “Biggie” Rhodes is dedicating his title fight against contender Alan Jouban to his best childhood friends’ mother, Carol Luce, who served as a mentor to Rhodes and helped him tremendously along his path of academic and athletic success.
“Carol Luce helped me out a lot, keeping me on the right path, and by my senior year she and her husband helped me get into a private high school that, in turn, got me into college. I can never repay her for the impact she had on my life. She is fighting cancer now, and since I consider her family, I want her to know she’s not in this fight alone. I’m dedicating my fight at RFA 10 to her. I can’t wait to see her and the Luce family at my fight and publicly support them.”
RFA 10 will feature the first-ever RFA welterweight title fight pitting two of the sport’s most exciting young strikers, Mike “Biggie” Rhodes and Alan Jouban, against each other for the belt. Rhodes (5-1) and Alan Jouban (7-1) are both coming off of stunning TKO victories in the RFA Octagon this summer and will ride that momentum into their high-stakes title fight at Hy-Vee Hall in downtown Des Moines, Iowa on Friday, October 25. RFA 10 will air live nationwide on AXS TV starting at10:00 p.m. ET.
RFA 10 will also feature more familiar names and rising prospects. The co-main event will see UFC veteran and The Ultimate Fighter 15 star Justin The American Kidd Lawrence (4-2) face local featherweight champion Luis Saldaña (7-1) while RFA vet Cory Galloway (3-1) returns to face Jeff Bates (2-0). There will also be a pair of lightweight tilts, as local champion Johnny Case (12-4) meets NCAA Division I wrestler E.J. Brooks (7-1) and hometown hero Michael McBride (4-0) looks to keep his perfect record intact against Emmanuel Sanchez (4-1).
The entire main card of RFA 10 – Rhodes vs. Jouban will be televised live on AXS TV starting at 10:00 p.m. ET / 7:00 p.m. PT on Friday, October 25th. RFA 10 will be the promotion’s first event in Iowa and will mark the seventh state the RFA has visited.