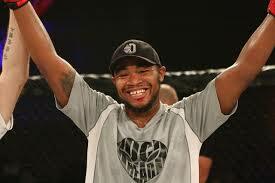 This Friday night (October 25) Resurrection Fighting Alliance will take over the Hy-Vee Hall in Des Moines, Iowa for RFA 10.

The organization will honor Breast Cancer Awareness month by not only sporting pink Adidas gloves during the fights, but also its traditional red and black logo will be turning pink.

“We are taking the RFA pink in honor of Breast Cancer Awareness month to raise awareness throughout the MMA community,” said Soares. “All of our fighters will wear pink adidas MMA gloves, the RFA logo will turn pink and you’ll see pink cues inside the Octagon at RFA 10. Breast cancer has hit the families of many of our executives as well as our fighters, so we are all coming together on October 25th to support this cause.”

The main event is a battle for the welterweight championship between Mike “Biggie” Rhodes and Alan Jouban. This will be Rhodes’ third bout inside the RFA Octagon and his only loss came to the now UFC fighter Brandon Thatch. At 5-1 he feels that RFA is the best place for him to grow and build as a fighter.

“This is my third fight for RFA, the first fight I had with them didn’t go the way I wanted but it was an exciting fight. I took it on short notice and this company and the President Ed Soares  are great people that want to get the best young prospects and talent out there and push them towards their ultimate goal which ultimately is being in the UFC. They are letting us grow and build and are giving us that platform we need.”

Rhodes has no doubt how the main event title fight will finish – with his arm being raised and the title around his waist.

Along with the main event, RFA 10 features seven other fantastic bouts, including the co-main event between former Ultimate Fighter Justin Lawrence against Luis Saldaña.

The fights aren’t the only thing going down inside the RFA Octagon on Friday night – the organization and AXS TV will also honor MMA legend Pat Miletich with a lifetime achievement award.

“Pat Miletich is a legend and a true pioneer in mixed martial arts,” said Soares. “As a fighter, he was the first ever UFC welterweight champion, and as a coach, he was the first to devise a training program fully dedicated to MMA with ‘Miletich Fighting Systems.’ Pat is truly among the most influential figures in MMA and is largely responsible for building some of the greatest champions ever to enter the Octagon.”

Miletich will receive the award during the RFA 10 broadcast which will air live on AXS TV starting at 7pm PT/10pm ET.

Check out the full RFA 10 fight card below.