EA Sports UFC will not hit shelves until next year, but the company revealed today that UFC light heavyweight champion Jon Jones will grace the cover for the game.

However, Jones will not be the only fighter to be featured on the cover – you, as the fans have the opportunity to choose the second cover athlete. 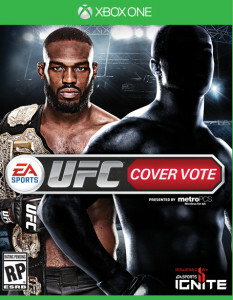 In an official release, Jones stated, “It’s another one of those surreal moments, one of those moments you just have to step back and pinch yourself and realize I’m not dreaming.”

Sixteen fighters will square off in a bracket-style elimination tournament to earn your vote and share cover honors with Jon Jones – but only one will be left standing. Cast your vote on the matchups below and help make sure your favorite fighter gets their hand raised as the EA SPORTS UFC co-cover-athlete. 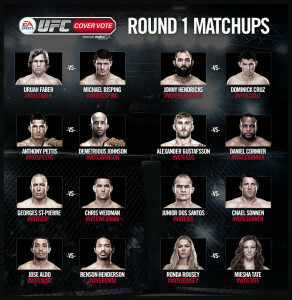 Fans can double their voting power by using the fighter specific hashtags located under each headshot on “Twitter Vote Thursdays”. Whenever one of the fighter hashtags is used on Twitter on Thursdays, it will be counted as two official votes.