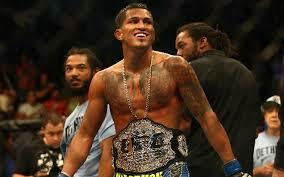 According to UFC President Dana White, Anthony Pettis has sustained a knee injury, however he is still expected to defend his UFC lightweight championship in December.

White told FOX Sports on Saturday night that Pettis suffered a minor knee injury and has spent the past couple of days in Las Vegas with Dr. Steven Sanders, an orthopedist at Bone & Joint Specialists.

“Showtime” won the UFC lightweight belt at UFC 164 in August, when he secured a tight armbar to force Benson Henderson to tap out.

Pettis is expected to take on Josh Thomson at UFC on FOX 9 on December 14 in Sacramento, California.