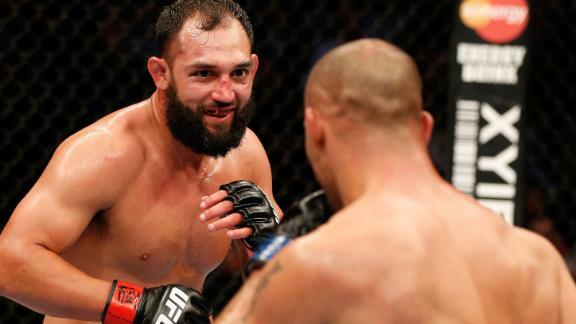 It’s hard to criticize a fighter with only two losses on his resume (only one loss in rational people’s eyes, but I digress). There were still areas that needed Johny Hendricks needed to improve on, similar to all fighters today. I’ve always brought up his cardio issues in how he slows down in latter rounds. Instead of winning the fight definitively, he starts to fatigue and let his opponents corner him. That leads to taking unnecessary punishment.

Another flaw that Hendricks had been dealing with is his lack of fluid striking. He has been getting away with simply rushing into his opponents and throwing a reckless flurry of punches. He would wind up so heavily and come in so quickly that his opponents were unable to even attempt a counter punch. Shockingly enough, it worked out effectively against TJ Waldburger and played a major role in defeating Carlos Condit besides his takedowns.

There were some striking improvements in his fight against Georges St. Pierre, where he was utilizing more knees inside the clinch and at the end of his combinations. We saw how he used short elbows against the fence that significantly affected St. Pierre near the end of the first round. What seemed to be lacking was not throwing any leg kicks. On Friday, I wrote about how leg kicks have been non-existent in his striking for most of his UFC career.

As successful as he’s been, his striking has become fairly predictable. A dynamic striker, who has a high fight IQ like Robbie Lawler would be able to figure him out. If Lawler was able to keep the fight standing, it seemed like a foregone conclusion that it was his fight to lose. That pre-fight assessment proved to be incorrect. Hendricks came out looking to land more leg kicks and volume punches rather than wind up for the big haymaker that he tends to throw early on in the past.

He was throwing his dangerous straight left at a more rapid pace to fluster Lawler and try to keep him off balance. This fight wasn’t going to end like the knockouts of Jon Fitch and Martin Kampmann. It was going to take a relentless pace and continuation of make Lawler uncomfortable. Rory MacDonald failed to push the pace, which let him get comfortable and start landing powerful strikes that eventually knocked him down.

What has always benefited Hendricks is his ability to control the octagon early on. While judging has always been inconsistent and tough to rate, I’ve tried to look into how they truly judge fights. Some of them are clearly incompetent, while others tend to favor takedowns and octagon control. I don’t necessarily agree with the favoritism of takedowns, especially when the fighter doesn’t do anything on top. That’s why it wouldn’t have been an outrage to me if Hendricks had lost to Condit. Still these are the mindsets of most judges and I’ve learned to accept it, as fighters should as well.

When Hendricks was in rhythm, he continuously made Lawler step back and force him into the fence.  That will make the judges score the round in your favor, if the opposing fighter didn’t manage to do anything significant in the first round. That made it understandable why most people gave the first two rounds to Hendricks, especially after you look at the strike count differential.

Similar to past fights though, he began to fatigue once again. His pace dropped considerably in the third round and the excellent head movement he was using in the first two rounds began to fade away. He kept putting his hands up and standing still rather than moving, which is always a recipe for disaster if you continuously do that. Stefan Struve is a prime example of that error, which is one of the key reasons why he hasn’t fought to his potential.

It seemed like the callous weight cut had taken a toll on him. We saw at the weigh-ins that he was literally shaking on the scale. I’ve spoken to him backstage after a press conference and said that he walks around between 205 and 210 pounds. Most welterweights don’t exceed 200 pounds, if you ask them about how much they walk around at. He may have to consider eating better, so his weight cut isn’t so excruciating.

The more Hendricks stopped using head movement and began being cornered, the more he got picked apart. Lawler is infamous for stalking his opponents and picking them apart. When Hendricks was being cornered, that’s where he took the most punishment and was rocked by a hard left uppercut in the third round. Lawler began to land his jab consistently, which kept Hendricks from trying to shoot in for a takedown. It also didn’t help that he was becoming fatigued. Then he finally successfully landed a takedown near the end of the fourth round. At that moment, it seemed like he turned the corner. He seemed to have caught a second wind, as the takedown showed he may have five more minutes of being relentless.

He continued to land that inside leg kick, which began to affect Lawler’s right leg causing a hematoma. He wasn’t able to explode as much as he’s used to, when throwing combinations. It was an effective game plan, considering how dangerous Lawler is with his kicks. Even though Hendricks is an outstanding wrestler, it’s hard to recover from taking a clean head kick. Besides Condit and Tarec Saffiedine, there aren’t any other welterweights that come close to Lawler’s ability to land vicious kicks. It was important for him to continue to be unpredictable and essentially make Lawler rely on his boxing.

The final round truly showed how gritty Hendricks truly is. After clearly losing the last two rounds, he need to reevaluate his game-plan of trying to stand and trade. He needed to go back to his bread and butter, especially after successfully landing a takedown in the final seconds of the fourth round. He shot for a double leg almost immediately into the final round and continued to try to damage Lawler’s right leg with knees once again. It was a brilliant strategy in softening him up for the eventual double leg takedown that he attempted two minutes later. Lawler’s takedown defense was once again superb, as people tend to forget about his grappling ability.

After landing three hard rights that seemed to have wobbled Lawler, he went back to his roots, took him down, and controlled him on the ground in winning the last round. I’ll never understand why fighters go for a takedown, after they were clearly landing hard strikes that affected their opponent. In that situation though, Hendricks saw an opportunity to take him down and not allow any more opportunities that could damage his chances of winning. We’ve seen in the past how Lawler is always a threat, regardless of how much damage he’s taken. Who can forget his incredible knockout against Melvin Manhoef, when he was getting dismantled by leg kicks? In that situation, Hendricks made the right decision in going for the takedown in leaving the judges with no choice, but to rightfully crown him champion.

The victory showed his evolution as a mixed martial artist, where he held his own on the feet and defeated one of the best strikers in MMA today. He had to dig deep, when he wasn’t able to land any takedowns in the first three rounds. His performance wasn’t perfect by any means. It was the improvement in his jab and leg kicks is what should really be commended. If he can continue to be fluid with his striking and use the head movement he showed in the first two rounds, then we could very well see another long title reign in the welterweight division.