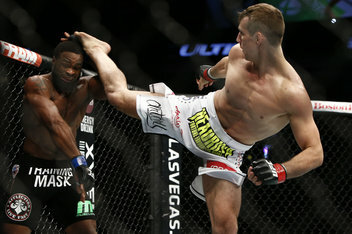 The UFC has spoiled fans once again with another double-header taking place this weekend, with two events both on Saturday.  UFC Fight Night 53 is headlined by a pivotal welterweight matchup Gunnar Nelson vs. Rick Story in the late morning/early afternoon (in North America), followed by the evening card, UFC Fight Night 54 taking place just a few hours after, headlined by another important welterweight matchup, Rory MacDonald vs. Tarec Saffedine.  Also taking place this weekend, in the UFC Fight Night 53 co-main event, Max Holloway takes on Akira Corassani, and on the Halifax card Raphael Assuncao fights Bryan Caraway, and the winner will be close to a title shot against TJ Dillashaw.  Here are three things you can expect:

1. Assuncao will pull off the win over Caraway but it won’t be an easy task

Raphael Assuncao is taking on Bryan Caraway this weekend in Halifax, and although I still think the top 5 bantamweight will pull off the win, I don’t think it’ll be too easy for him.  Assuncao is coming off of a relatively long layoff, which includes an injury.  He last fought at UFC 170 and went to a successful decision against Pedro Munhoz, and beat current champion Dillashaw just a little under a year ago, via a close split decision.  Caraway has been on a roll lately, with a win over top 15 fighter Erik Perez, he is now ranked #10 in the division.  I think Assuncao is the better fighter by far, but I think it’ll be pretty close because of the layoff and injury.  I think it will end in a close unanimous decision for Assuncao, but a win for Mr. Miesha Tate is not out of the picture, for sure.

2. Rory MacDonald defined a clear contender (behind Lawler) and will receive title shot with win

Rory MacDonald has been a legit welterweight and contender for years now, but even though he only has two professional losses, his loss to Lawler did just enough last year to prevent him from earning a title shot.  A win over Tarec Saffedine should definitely define him as a true #1 or #2 contender, and he deserves a title shot with a win, as well.  A title fight rematch between Johny Hendricks and Robbie Lawler is set for December so MacDonald could fight the winner in early 2015, if all goes well.

3. Most of the hometown fighters should pull off the victory

UFC Fight Night 54 takes place in Halifax, Nova Scotia and UFC Fight Night 53 takes place in Stockholm, Sweden.  Both events have many fighters from Canada and Sweden, and most of the hometown fighters should probably pull off the ‘W’.  It would be safe to say most of the Canucks on the Halifax card, headlined by Rory MacDonald vs. Tarec Saffedine, like Elias Theodorou, Chad Laprise, Oliver Aubin-Mercier, and more are likely to walk away with the win.  On the other hand, most of the Swedish fighters on the earlier card will also win, so watch for Gunnar Nelson and some others to win.  And expect crowds to go wild!