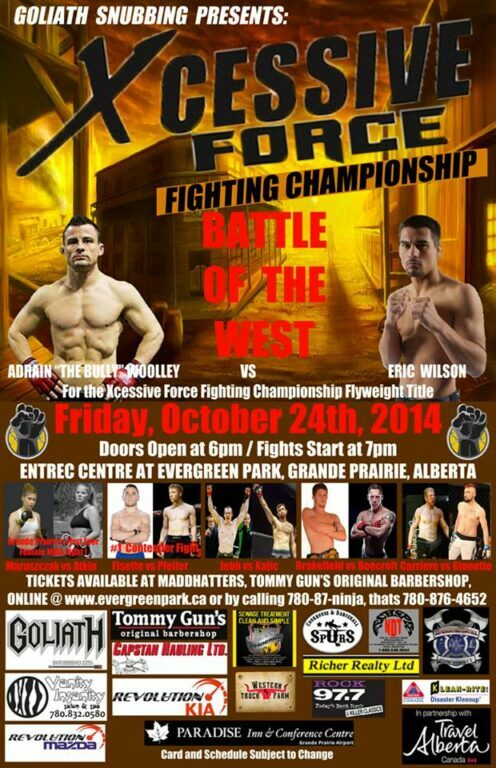 Xcessive Force FC returns to GFL on October 24 with “Xcessive Force Fighting Championship 5”, a hotly contested card, emanating from the Entrec Centre in Grande Prairie, Alberta, Canada. The mega card is sure to have enough heat in the cage to blow the roof off of the cold night in the Great White North with 2 title fights and a huge undercard.

In the main event, the inaugural XFFC Flyweight Championship is up for grabs when Eric Wilson (6-5) fights Adrian Woolley (8-3). Wilson already holds a title with another organization and has only been stopped once in his career. Look for Wilson to use his punching power to try and get Woolley’s attention early. If that doesn’t work, Wilson will have to resort to his grappling which is a handful, especially at 125 lb. Wilson, in particular, loves to go for leg submissions so Woolley will need to be very aware of that if and when the fight hits the mat. Woolley will have an experience advantage and is coming off an impressive win in May after a long layoff. Woolley is a strong wrestler who likes to control his opponents on the mat and grind them down over the course of an entire fight. Woolley is a compact fighter who doesn’t leave himself open very much for counters so this fight could be a shootout.

For the XFFC Featherweight Championship, undefeated Michael Karkula (6-0) battles Sabah Fadai (6-4). Karkula is a well-rounded MMA fighter with wins coming via submission, KO and decision. Karkula has shown an ability to dominate and dictate wherever the fight goes. This will be his first opportunity to challenge for a title and fighting in the co-main event, Karkula wants to steal the show. Fadai is a durable pro won his last fight via TKO after a barnburner. Fadai brings KO power into the cage and can end a fight with one punch. Fadai has fought for some of the top organizations in Canada and looks to cash in on his success with championship gold.

Spencer Jebb (8-3) takes on Dejan Kajic (5-2-1). Jebb is on a 6 fight win streak, 5 by stoppage, and will look to establish his striking game early. Kajic hasn’t lost in two years and brings an impressive wrestling and grappling game into the cage. Look for Kajic to close the distance and stifle the striking of Jebb.

Watch all the knockouts, submissions and grudge matches as XFFC returns to GFL on October 24 with another installment of hard hitting MMA with “Xcessive Force Fighting Championship 5” available to a global audience.

Fans can watch the $14.99 online stream live on GFL HERE.