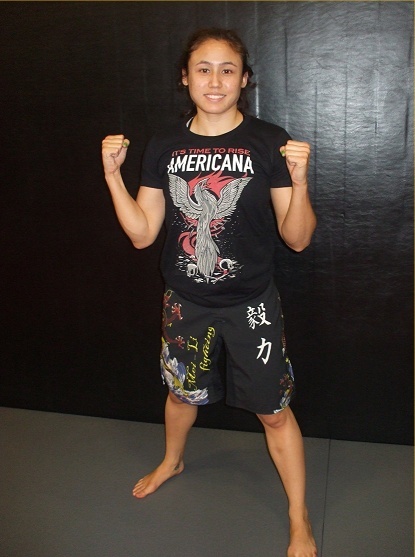 Jamie Moyle is a rising star.

This past July, she won the Tuff-Nuff amateur 115 lb tournament to not only earn her a shiny championship belt, but also a pro Invicta contract. She is set to make her pro debut against Jenny Liou Shriver in Invicta 9, November 1st, in Iowa, broadcast live on UFC Fightpass.

Mmasucka got to know Jamie a little better.

The 25-year-old first began training at Xtreme Couture in Las Vegas in 2008 for fun because she wanted to learn how to fight. After training a couple of days a week for almost a year, she decided she wanted to start competing. “I realized that sparring was really fun, I was getting better at technique and I had a coach who took me under her wing to make me the best fighter I could be,” Jamie explained. “I had kickboxing and jiu-jitsu coaches, but Erin Toughill taught the pro MMA women’s class. I was usually the only person who went, so she kinda gave me privates all the time and started shaping me as a fighter.” Erin Toughill is a female MMA pioneer, fighting in Japan before the UFC and Strikeforce even considered having females on the card.

Jamie moved to Florida and had her amateur debut in 2011. She eventually moved back to Las Vegas and joined Syndicate MMA. “I lived right down the street from Syndicate,” she said, explaining her choice. “I was going to check out all the gyms in Las Vegas, but I ended up checking out Syndicate first. I just really liked it and never went anywhere else.”

Her training schedule is full of jiu-jitsu, MMA, and Muay Thai classes. She had four amateur MMA fights before beginning jiu-jitsu tournaments, plus two Muay Thai fights.
Upon participating in the Tuff-Nuff amateur 115 lb tournament, she defeated two fighters to win the championship belt, ending her amateur career at 5-2

“Winning that tournament gave me confidence and made me feel good about fighting,” she said. “I’m excited to fight for Invicta. I know it’s getting a lot of attention right now. It’s kind of cool how a lot of the girls left out of my weight class, so they’re looking for more talent and more contenders for the belt. I know after a few fights if I make a name for myself, I have a chance at being a contender. It’s also exciting to be on Fightpass. Being associated with the UFC is really cool because that’s where all the big fighters want to be!”

Jamie is also studying part-time at the University of Nevada to become a nurse. “My sister and brother-in-law are nurses. I knew I needed to pick a degree that would actually give me a career instead of a degree where it’d be hard to find a job,” she said. “I like to be a little more hands on rather than sitting at a desk, so I thought nursing would be a good fit for me.”

It’s hard balancing training, school, and life. “Not having a job helps. Most of my friends are friends from training, so I hang out with them at the gym. Sometimes I just go crazy!” she laughed. “I like the friendships you make, and how everybody’s so happy and in a good mood at the gym. It makes you feel good, and you’re always making connections with people.”

Being a 115lb female at a big fight gym is a challenge in of itself. “Being the only girl isn’t really a big deal to me,” she admitted. “I think that being the smallest person means you just have to pick your partners wisely and try and go with smaller people. I guess it’s kind of fun being the only girl. You get more attention sometimes.”

Jamie will face Jenny Liou Shriver who is 2-0 as a pro and trains at Team Execution in Idaho. “The only video she has online is over two years ago from when she was an amateur, so I feel it’s not even relevant to look. I know she’s more of a grappling style. I’ve been working on my cardio since it’s my first pro fight,” Jamie said. Amateur rounds are three minutes, while professional rounds are five. “I’m mixing everything up, going from grappling to striking, making sure everything if flowing.”

Watch Invicta in The RiverCenter in Davenport, Iowa, or on http://www.ufc.tv/page/Fightpass Sat. November 1st