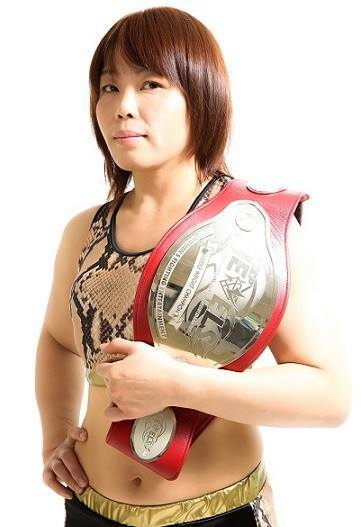 Takayo Hashi (15-4) is one of the highest ranked female fighters in Japan. This 10-year veteran, who has competed at both 125 and 135 lbs, holds the title of “DEEP-Jewels Champion” at bantamweight, which she won by defeating Shizuka Sugiyama (Nakamura) this past May in Japan. She’s the former Smack Girl Champion of the now-defunct Japanese promotion. She will challenge champion Barb Honchak for the flyweight title belt in Invicta FC 9 November 1st in Davenport, Iowa.

Takayo began mixed martial arts because of her older brother. “I went to support him in his debut fight, and that was the trigger for me,” she said. “From then on, I started going to watch live events and I started wanting to do it myself.”

She has been training for about thirteen years and competing for ten. “This makes almost exactly ten years I’ve been fighting. This fight is perfect to mark the anniversary,” she said.
Like most females around that time, both in Japan and overseas, her first fight was pro. “In those days there weren’t really any amateur MMA events, so I just jumped into professional fighting,” she explained. “I also did grappling matches besides MMA.”

Takayo belongs to the gym Wajitsu Keishukai AKZA (Á-ku-za) in Saitama, near Tokyo. “My head coach and main training partner is Koizumi-san, who has instructed me from way back when I first started. I also learn a lot from other gyms and their teachers I visit from time to time.”

She competed in the Japanese Abu Dhabi (ADCC) qualifiers in 2007 and won her division, allowing her to travel to New Jersey to fight in the world-renowned ADCC Submission Wrestling World Championship. She took third place. “I want to compete in Abu Dhabi again. In addition to MMA fights, I’ve been doing Brazilian jiu-jitsu and grappling tournaments. Competing in the Abu Dhabi adds to your status and life-style, so from here on out, I want to be competing in it!”

She works during the day and trains hard at night. “I like every kind of training,” she stated, “as long as I’m getting stronger and improving. You get stronger especially if it’s unpleasant, so I throw myself into it as hard as I can.”

The Japanese stand-out had three hard losses overseas in 2010-2011 against Strikeforce champ Sarah Kaufman, vet Tara LaRosa and current UFC contender Cat Zingano. After that, she returned to Japan and got back on the winning path.

“I put the past behind me and changed my way of thinking,” she said about her rebound. “In order to win in North America, I’ve been doing more physical training and situational positional sparring. Also, I’ve been strengthening my boxing and wrestling. Of course, I’m continuing with my Japanese-style training of ‘where there’s a will there’s a way.’”

After winning the DEEP-Jewels title in a weight class above her natural weight, she was offered the title fight against Honchak.

“I’m so thrilled to be signed to Invicta, and it’s a high honor to be chosen for a title match for my debut. I have always wanted to compete on this kind of stage. As the Jewels champion, I’m not going to fail in this important battle, and I’ll make sure I win decisively.”

She’ll have her hands full with Barb “Little Warrior” Honchak who is ranked #1 in the 125lb division. She first won the title by defeating Vanessa Porto, and defended it against Leslie Smith in December last year.

“As expected, she is a fighter well-rounded in everything,” Hashi said about her opponent. “Moreover, she seems very strong in striking and when clinching up.”

Takayo is always busy with work and training, but when she has the chance, she spends time in the water. “I’m very passionate about scuba diving!” she said. “I want to go scuba diving in many different oceans all over the world!

Watch Invicta in The RiverCenter in Davenport, Iowa, or on ufc.com/fightpass Sat. November 1st