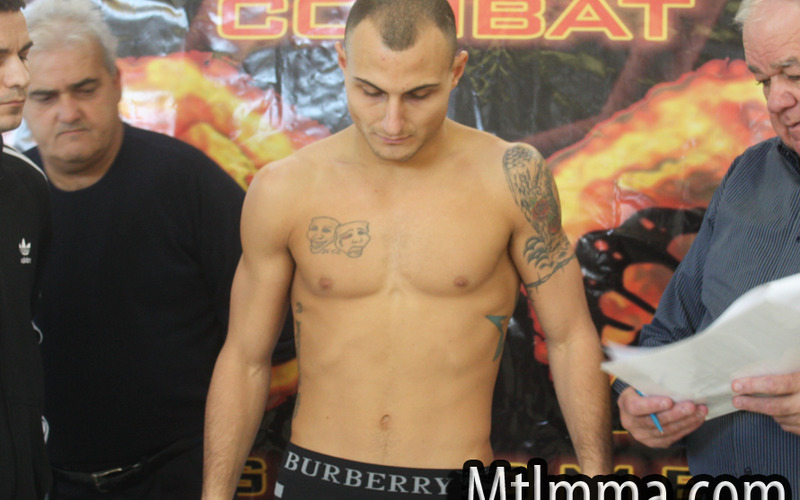 Canadian based fighter Michael Imperato became the latest UFC signing yesterday, after he signed on to fight Aljamain Sterling in Australia in just two weeks as a late replacement for Sterling’s original opponent Frankie Saenz. Imperato (7-1) seemed like a decent prospect with half a dozen submission finishes.

However, Imperato found himself cut from the organisation less than 24 hours after his signing was announced. Why? Because once again, the UFC failed to do an adequate background check.

Imperato was involved in the documentary series Fight Exchange which aired in Canada on a minor station around eighteen months ago. In episode four of the program, Imperato got into a confrontation with Nate Stark also on the show and made repeated slurs of a homophobic and racist nature against him including insinuating that, because of his race, Stark would likely steal from him. Video of this is available here (which of course comes with a content warning for racist and homophobic language). Imperato issued an apology at the time via TopMMANews, blaming his upbringing and ignorance for his comments.

In his apology, Imperato said: “I have used racist words when I was mad, not to be racist just to make people mad in an argument or heat of the moment. I never realized how stupid I sounded or how much I effected others. I have recently realized where these words have come from and I regret using them. I also apologize to any one who was hurt by my comments. The world is changing fast and can be pretty crazy. Laws are being changed and some people agree and others don’t.”

Imperato also credited movies like 12 Years a Slave for his recent education to the true meaning of the n-slur.

When news of his signing was announced yesterday, fellow Canadian fighter Lyndon Whitlock began tweeting Dana White, the UFC and other leading figures in the organisation drawing their attention to the video of Imperato’s comments. It is not a stretch to believe that that is what led to his contract offer being rescinded. Imperato confirmed the development on his Facebook page, saying “unfortunately I have made some decisions in life years ago that are now affecting me. Thanks to a reality show that I was in where I made some stupid comments and of course people being jealous, I have just got my contract to the UFC cancelled.”

So once again, like Will Chope at the beginning of the year, we have a situation with a UFC fighter being signed and an unsavoury past coming to light. These are of course not the two most egregious examples of past UFC fighter behaviour (the violent past of fighters like Abel Trujillo, for example), but unlike those cases this was entirely avoidable. Around a year ago the UFC also cut German fighter Benjamin Brisa for alleged links to Neo-Nazi groups that were unearthed by Cage Potato before he ever fought in the UFC – at that point, Dana White admitted that the organisation did not do background checks on signees. This changed following the Chope case, and in May the UFC started asking for more detailed disclosure and releases of documents from all contracted fighters for the purpose of doing background checks.

In researching this story, I Googled Michael Imperato. On the first page of Google results is this video (which once again comes with a content warning for racist and homophobic language), showing Nate Stark calling out Imperato for his comments on the show. If you search for Michael Imperato on YouTube, the two videos I have linked to in this article are the third and fourth results. If the UFC really does do any kind of ‘background check’…how does that not include a Google search?

Though the UFC has now done the right thing, it should never have got this far.