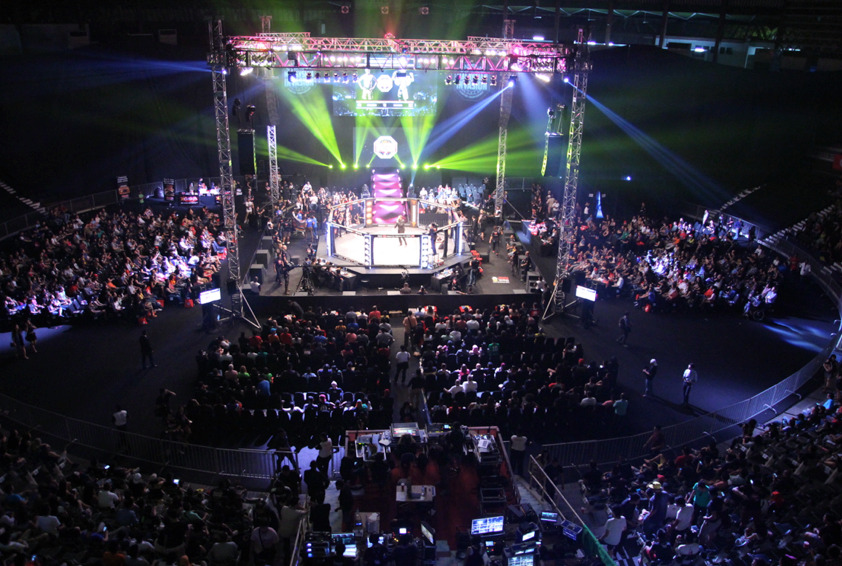 Former UFC fighter Will Chope (21-7) was expected to make quick work of MMA debutant, Matt Pellino (0-1), but the fight didn’t turn out to be as easy as he might have liked.

Chope earned a second round submission win over Pellino in the main event of Saturday’s MIMMA 2 Finals card, which took place at the Stadium Negara in Kuala Lumpur, Malaysia. The entire event streamed LIVE and is still available for replay at mimmalive.tunetalk.com.

Chope wasted little time in the opening round, taking the center of the cage and pushing the pace. The lanky Californian, though, was eventually brought to the canvas by Pellino, who entered the Catchweight contest with 20-lbs on his opponent. Chope did his best to fight off his back with a wide range of strikes, but Pellino remained content on seeing out the round laying in top position without executing any substantial damage.

Pellino surprised the masses in attendance once again at the start of the second round, scoring a takedown and gaining top control. However, it was Chope, again, who controlled the action despite being at the bottom.

And after briefly landing a few stiff strikes, he locked in a Triangle choke which immediately brought about a tap.

“I won via Triangle [choke]. Not what I expected but a win is a win,” Chope said afterward. “Got a lot of work to do to improve. Huge respect to Matt for taking the fight. His wrestling did impress me and he has my respect.”

Filipino-American starlet Mark Striegl (13-1) had something to prove in his Bantamweight debut. Looking shredded in his drop to 135-lbs, fortunately for him, he succeeded.

The 26-year-old had always been known for his work on the floor and well, it was on the canvas where he finished opponent Kai Kara-France (7-5, 1 NC).

Following a brief spell near the cage, Striegl ended up taking France’s back. It was all rudimentary from there as Striegl slid his arm below his chin and locked in a Rear-Naked Choke. Without any space or position to jockey towards, France was forced to tap.

Short’s Muay Thai prowess was nullified early on when Wei scored a takedown. Thereon in, the Malaysian’s ample practice sessions on the mat’s clearly paid off.

After maneuvering to mount, Wei sought after an Head and Arm Choke. Without having to move, whatsoever, to tighten the hold, just moments later, Short succumbed and tapped out.

Things were fairly one-sided in Lenny Wheeler’s (7-3, 1 NC) beatdown on Italy’s Massimo Capusella (2-4). The stoppage came just 34 seconds into the first round when Capusella offered little defense to offload Wheeler’s continuous barrage of punches. Referee Olivier Coste stepped in when he saw enough but that only angered Capusella, who protested the intervention and went as far as shoving the official.

Check out full results from the event below: