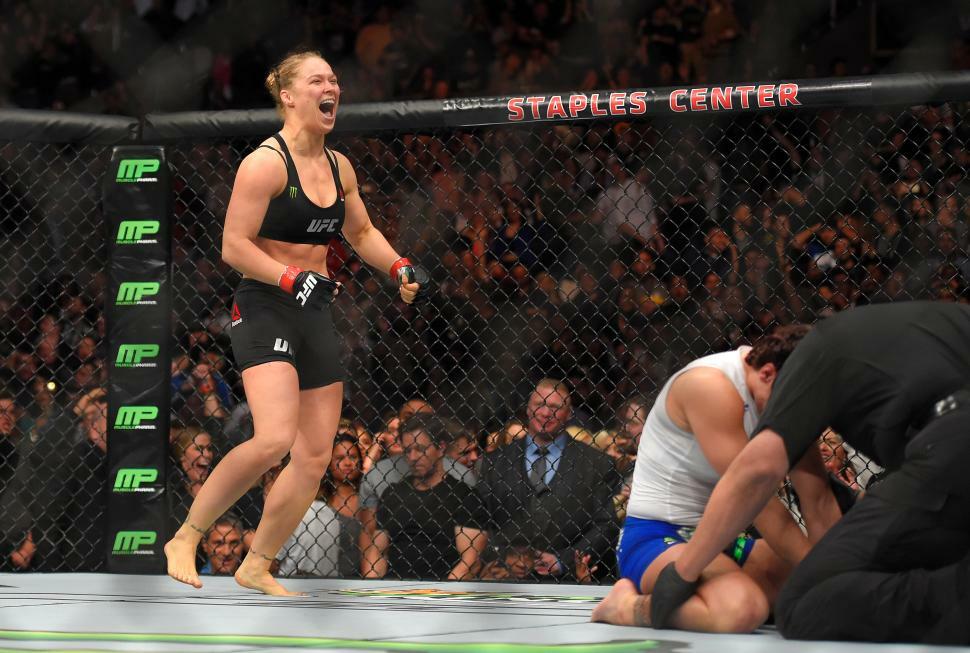 UFC 184 was as good as expected, given the minimal expectations going into the event. It featured many fights that were fairly predictable and one-sided. I’ll give my takes on the winners and who they should fight next. It’ll be difficult to fill the shoes of Joe Silva and Sean Shelby in figuring out what logically makes sense for these fighters. Here are my predictions and reasonings for these potential match-ups.

Who she should fight next: Miesha Tate

This decision is highly unlikely to occur, but this is from my perspective. The UFC probably isn’t interested in a third fight between Rousey and Miesha Tate yet. It’s a shame because that seems to be the only fight that can test Rousey at the moment. The calls for Bethe Correira to face Rousey are comical. It’s not like casual MMA fans know her very well. She’s undefeated and beat two opponents that probably aren’t UFC caliber. That’s a troubling sign of how weak the women’s bantamweight division is. The UFC production staff would have to do a stellar job in those promos to generate significant buzz for Correira. Jessica Eye would be a good test, but I’d like to see her in one more fight against a fellow contender. Tate has beaten Sara McMann and Liz Carmouche. Her resume speaks for itself, along with how well her fight against McMann did in the ratings department.

Who she should fight next: Amanda Nunes

They are probably going to make it a priority to book her properly. I’m expecting them to book her similar to Conor McGregor. They’ll put her against non-wrestlers to give her the best opportunity to develop. There is no denying Holm’s debut was lackluster, but the potential is there. A matchup against Amanda Nunes could be an excellent litmus test. While Nunes does possess excellent grappling and powerful top control, she seems reliant on her striking. That could make for an exciting battle and answer major questions for both fighters. Is Holm’s takedown defense as good as advertised? Can Nunes figure out her cardio issues? Those are the main concerns that many pundits have in analyzing both fighters.

Who he should fight next: Rick Story

It wasn’t an all-impressive performance for Ellenberger. The phrase “too conservative” seems to apply far too often in his recent fights. While he was smart in not being too over-aggressive in dealing with Josh Koscheck’s double leg attempts, it was his fight to lose. Ellenberger seems to have some confidence back, which could go a long way for any fighter. Rick Story would be an intriguing fight based on his wrestling and grappling capabilities. Both fighters are true veterans of the sport. It’s too early to give Ellenberger another top ten opponent and throw him into the wolves. A fight against Story should be the proper litmus test for his overall career.

Who he should fight next: Stephen Thompson

Jouban is another welterweight that seems to be in a difficult spot. There are so many options in the division, but so many top fighters are booked. It’s also hard to tell how Jouban would fare against the top of the division. After a devastating knockout of Richard Walsh, the time “may be” now (no copyright infringement) to see him against a certified top-level welterweight of the sport. Stephen Thompson has been inactive, due to injuries recently. Jouban has proven to be such a technical striker that it would be fascinating to see him against a world-class striker. It’s also proven that the 10th planet product has excellent grappling abilities to give Thompson fits. When a fighter effectively uses a standing elbow to knock out their opponent, it’s clear that they have something special. The last fighter to do that was Chris Weidman against Mark Munoz. That should be one of many indications that Jouban’s potential is unlimited.

Who he should fight next: Myles Jury

The options are endless in a fantastic lightweight division. Ferguson is on a five-fight winning streak, so a top 15 opponent is imminent. I’ll go one step further and give Ferguson an actual top ten opponent from the UFC’s glorious rankings. Myles Jury is one of the few fighters not booked for a fight at the moment. You would have to expect that Jury wants to come back soon following an uninspiring performance against Donald Cerrone. These are two fighters that are so well rounded and have multiple ways to defeat anyone on a given night. The battle for control of the octagon and utilization of range will also be thrilling to watch. Hopefully this fight comes to fruition or possibly Bobby Green, if Jury is dealing with a long-term injury.

Who he should fight next: Kyle Noke

The winner of the prestigious Battlegrounds MMA tournament is here to stay. After an impressive submission win over Mark Munoz, Carneiro has stated that he will drop to welterweight in his next fight. Opportunities are endless from the most deadly division in the UFC. Instead of throwing him into the wolves following a win over a declining middleweight, I’d like to see what he could do against a mid-level welterweight. Kyle Noke has been out for quite some time. His striking could give Carneiro fits, along with being one of the bigger welterweights. That is the most ideal option, although Nico Musoke and Hyun Gyu Lim can provide a thrilling action-packed fight as well.

Who he should fight next: Josh Burkman

One of the more quietly improved fighters that many believed defeated Neil Magny. If Means hadn’t lost to Magny, he would currently be on a six-fight winning streak. That deserves some credence in a stacked welterweight division. A step-up in competition is necessary, particularly against a veteran of the sport. Josh Burkman was given a ridiculous matchup in his return to the UFC. For him to survive three rounds against a juiced up Hector Lombard was admirable. An even playing field is needed in booking fights. Means facing Burkman could provide some interest from the hardcore audience

Who he should fight next: Ruslan Magomedov

In such a shallow decision, it’s hard to find a place where he can develop as a whole, Joe Silva booked Lewis to face arguably the worst heavyweight on the roster in Ruan Potts. Instead of throwing him against a veteran like Matt Mitrione, a slower approach with Lewis may be necessary. Anything can happen in the heavyweight division, so a shallower approach may not exist. My preference for Lewis is matching him against fellow prospects rather than established veterans. Ruslan Magomedov has generated some buzz in his recent victories. A heavyweight matchup featuring prospects seemed impossible in 2015. Lewis against Magomedov can be labeled as such in an old heavyweight division.