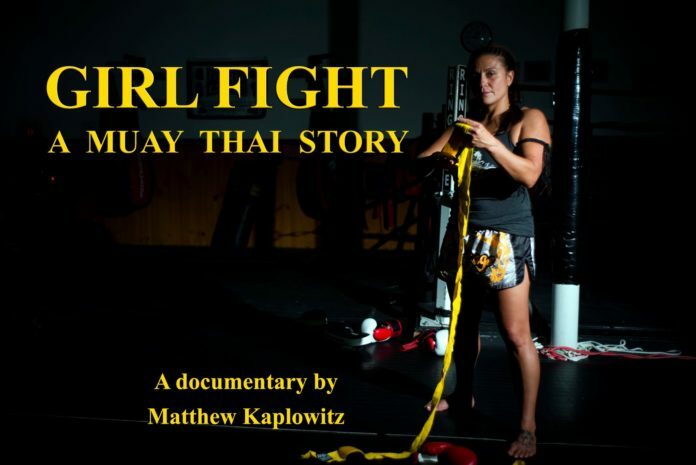 Located in Toms River, New Jersey, “Girl Fight” is America’s leading all-female Muay Thai Kickboxing academy. The academy was opened in 2009 by Prairie Rugilo, former WKA champ, who has become the first female to fight and win a title belt at MSG, been inducted into the NJ Martial arts hall of fame, and became a licensed Inspector and Judge for the State Athletic commission.

Prairie studied Tae Kwon Do as a child, and began boxing and Judo at the age of 20 to lose weight and get in shape. At 22, she started Muay Thai, “The art of eight limbs” (two hands, two elbows, two legs, two knees). It became her passion, and in 2004 she was awarded a high rank of Black armband. In addition to instructing, she actively competes and seeks self improvement and understanding in the ring. “Muay Thai is the national sport of Thailand,” she explained. “It’s a blood sport. I think it can get just as tough and rough as MMA, except you don’t get to tap out.”

Her record is 8 wins, 4 losses, and 1 draw.“Of course everybody wants to win. But everybody must have failure in their life if they’re going to succeed. I think failure is the doorway to success.”

How does the average person go from walking into a gym to fighting in a ring?

Photographer, writer and director Matthew Kaplowitz spent over a year and a half filming the documentary “Girl Fight: A Muay Thai Story,” showcasing the journey of fighters Prairie and her student DeAna. The “plot” of their lives takes twists and turns with title matches, revenge matches, opponent changes, and more.

The film artfully laces together scenes of their training camps and interviews of what goes through their heads leading up to their fights. It’s similar to The Ultimate Fighter in that the audience gets a look into what it takes to be a fighter, but completely different in that we are looking through a little window into their everyday lives. We see them more comfortable in their natural settings, and can relate to their lives. We see DeAna balancing training with caring for her son, and Prairie running classes at her school while sparring and doing cardio to prepare for her fight.

Every fighter feels differently about fighting. This film shows us how the art of fighting Muay Thai has challenged and helped the hearts of these women grow. Prairie shares her pre-fight self-analysis, and after we watch the fights themselves, we see how the fighters deal with the results of the fight. The behind-the-scenes footage gives something the average person can relate to and be inspired by.

The Jersey shore suffered a few natural disasters that Prairie and the rest of the community struggled to deal with. Hurricane Sandy destroyed a part of the town and much of the boardwalk. A fire continued that destruction. “We can’t harp on the bad things that have happened to us in this last year,” Prairie commented in the film. “We can just recover again from them and move on. We’re going to make new memories, new beginnings and hope for something better on the other end. This whole thing on the boardwalk is very similar to how a fighter goes through their journey.   Life doesn’t always go your way. You gotta roll with the punches and learn from each experience. It makes you stronger and wiser.”

What she said is very similar to my favorite saying, “Smile and carry on.” When it comes fight time, you have to focus your entire being on that one moment and put in maximum effort. After it’s over, win or lose, you have to refocus on the next challenge and move on. Life is up and down like an ocean wave.

The filming and editing is finished, but now Matthew is looking for help with other post-production costs, especially promoting the film and seeking distribution for the finished movie. Check out the Indiegogo page to for those interested in donating to help him reach that goal sothe film can be seen by everybody (Indiegogo uses flex funding, so even if the fundraiser does not meet the goal 100%, you still get your reward for contributing).