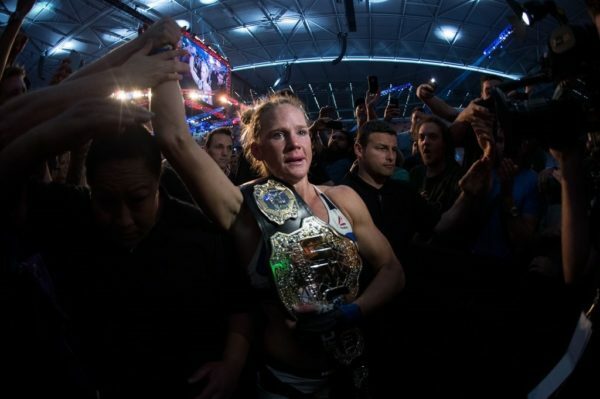 Inside Etihad Stadium, in Melbourne, Australia, former professional boxer Holly Holm did the unthinkable when she knocked out women’s bantamweight champion Ronda Rousey via headkick and follow up punches in the second round. Holm, a significant underdog, utitlized her superior footwork and striking prowess to beat Rousey in an utterly convincing manner. The result had shades of Anderson Silva and Chris Weidman’s first fight, where an utterly dominant champion was shut down by a more than capable challenger.

I know where the UFC will go from here. Rousey will get a break, the break she called for prior to her title fight. Holm will get a chance to bask in the limelight that comes from defeating a superstar like Rousey. The two will meet up again at a major UFC event in the future, most likely UFC 200, and it will do very, very well. We will see if Rousey can make the adjustments necessary to compete, or if Holm simply has her number.

While we know where the next fight lies for Holly Holm and Ronda Rousey, the rest of the UFC 193 winners are in need of future opponents. Here’s where I believe they should go.

The UFC still has two undefeated women’s champions, and though one was replaced, Joanna Jedrzejczyk is still the ruler of the strawweight division. She dominated game Canadian Valerie Letourneau to retain her title via unanimous decision. At this point, only one opponent makes sense for Jedrzejczyk, and that would be the woman who gave her the closest fight of her career. Claudia Gadelha fought to a decision against the current champion a little more than a year ago, losing via a controversial split decision. For Jedrzejczyk and Gadehla to compete for the gold at this point seems appropriate as they are currently the top fighters in the division. The winner stakes their claim as the undisputed ruler of the strawweights.

Mark Hunt left no doubt as to who should get the W in his rematch with Antonio Silva. Hunt KO’d “Bigfoot” in the first round, and in doing so showed that he still is capable of hanging with the top heavyweights in the division. Hunt also said that he would like to fight before the year is over. So really, if a heavyweight should fall out of a bout, plug the “Super Samoan” in there and get fireworks.

But as far as a clear cut next fight for the 41 year old fan favorite, how about a matchup between the winner of two top 15 heavyweight sluggers? Travis Browne and Matt Mitrione both have knockout power and are looking to rebound into title contention. A win for either would set them up nicely with Hunt who is also looking to get back into title talk.

Robert Whittaker moved up from 170lbs late in 2014 and has been on fire ever since. His defeats of Brad Tavares, Clint Hester, and as of last night Uriah Hall, have increased his stock by leaps and bounds. I think it’s only right that in his next fight he face someone in a similar position as himself, as far as rankings are concerned. Enter Derek Brunson, who is a quiet 5-1 in the UFC since coming over from Strikeforce. Ranked two spots ahead of Whittaker, Brunson would be a good next test for the surging New Zealander.  The winner can delve deeper into the top 10, and work closer to a title fight.

Jared Rosholt won in the literal sense, in that he defeated top 15 talent Stefan Struve. In doing so however, he put on an abysmally slow performance that had thousands of Australians booing. Still, the college wrestling standout is 6-1 inside the UFC, with his only defeat coming at the hands of journeyman Oleksiy Oliynyk. He should get a definite step up in competition to see if he is indeed destined for the upper echelon of the division. Former champion Frank Mir would be the perfect test for Rosholt. Mir is coming off a controversial decision loss to fellow former champion Andrei Arlovski, but has looked better in his previous two fights. If Rosholt can get by someone with the pedigree of Mir, then we have ourselves a fighter to watch.