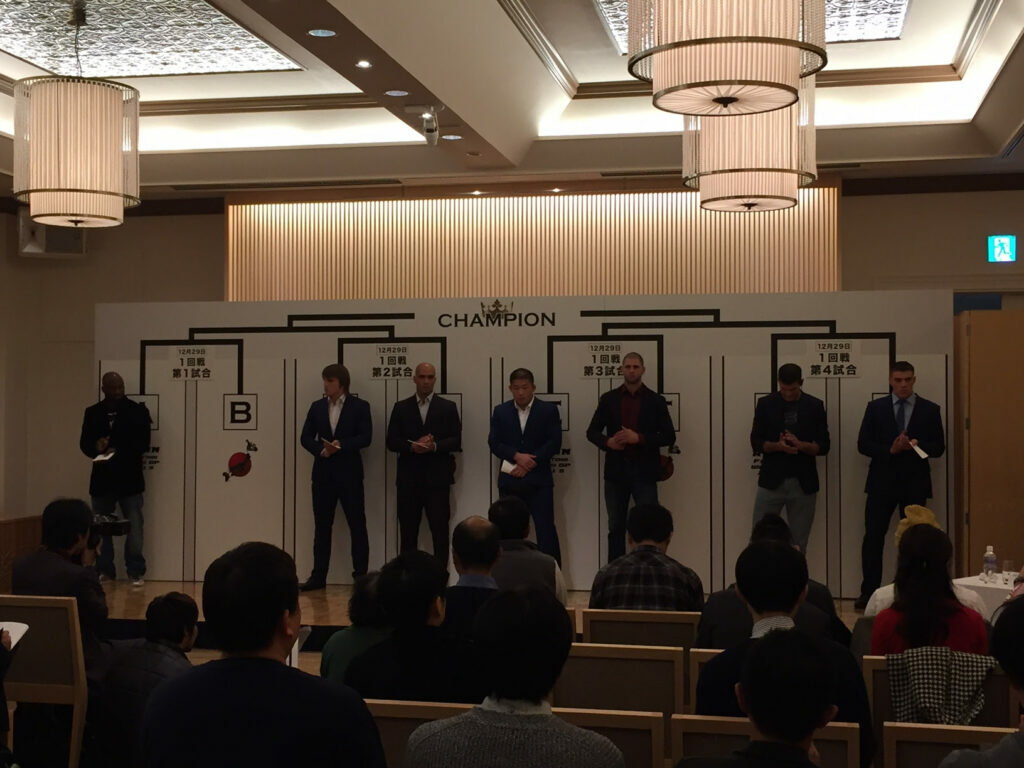 Fighters comment on the highly-anticipated tournament that will award its winner a $300,000 grand prize

TOKYO, JAPAN (Nov. 30, 2015) –A drawing to determine the tournament brackets and first stage matchups for the RIZIN FIGHTING GRAND-PRIX 2015 eight-man, heavyweight tournament that will take place over the course of two days – December 29 and December 31 – and will award its winner a grand prize of $300,000, was held today in Tokyo.

BAMMA Heavyweight Champion Mark Godbeer, who had been scheduled to compete in the tournament, was forced to withdraw due to a neck injury sustained in training. BAMMA will announce a replacement fighter for the tournament soon.

Prior to the drawing, Chairman Nobuyuki Sakakibara stated, “This tournament will be the highlight of RIZIN. Fighters from around the world who are proud to represent their promotion and country, and are eager to use this platform to boost their career to make a name for themselves have gathered in the tournament. The majority of the media who gathered today may not know much about these athletes, but when K-1 first kicked off in 1993, nobody knew about Branko Cikatić or Mike Bernardo. The fighters who open up the new doors are those who exceed their expectations.”

The seven contestants slated for tournament action appeared at the press conference.  Each drew an envelope  numbered one through seven, and those who drew numbers one through four received the opportunity to choose their respective places in the tournament draw.

The first stage tournament matchups will be as follows:

A tournament reserve bout between Valentine Moldovsky and Yuta Uchida was also announced during the press conference.

“I am honored to fight for RIZIN. I am excited to showcase my skills in front of the Japanese fans and get the job done. I’m happy to be able to pick number one. I’m always number one. I’m in a position where others will pick me, my job is to crush whoever stands next to me.”

““I currently don’t have an opponent, but I’m sure that BAMMA will send a good fighter for me. But unfortunately whoever comes will get smashed so he better be prepared. I think Ishii made a smart choice by avoiding me and my bracket. Good for him.”

“For me, becoming the champion in more important than the money. Money will follow as a result of being a true champion. My mind is set to win the tournament.”

“The reason why I am here is because I believe in myself. I will fight to represent my small country. My opponent has wild striking but there is no reason why I would lose. I will put on a show and come out victorious.”

“I don’t care who fights me. My dream since I was a kid was to fight in Japan, and I am living the dream right now, my goal is to show my best performance on New Years Eve.”

“I like the matchup. I’ve been training with Sambo world champion Blagoi Ivanov and am familiar with the Sambo fight style. I know he comes from a great team, but I will be ready to take anything he has to offer so it will be a good fight.”

“I am living a childhood dream. I am more focused on continuing my journey on my dream to become a champion in Japan. I will think of what to do with the money once I achieve my goal.”

“Preparation is good. I will not feel that a fight is a fight, the battle on NYE has just begun.”

“My plan is to invest half of the prize money in gambling and will donate the rest.”

“This was a good offer that I could not turn down. An MMA tournament, Good opponents, good prize money. I don’t want to focus too much on winning the tournament because that will affect my mental game, so I will focus on one fight at a time.”

“I really don’t know any of the fighters here today, so I will choose my opponent and hope I’m lucky.”

“That type of big money will change my life and my family’s life. And also becoming a champion. Those two aspects will be huge accomplishments for me.”

“It has been my dream to fight in Japan. I do not know too much about my opponent, but I’m sure we will both be prepared for an exciting fight. I think this will be an excellent fight.”

“I will be representing Sambo. I would like to show the beauty of Sambo and the art of Sambo.”

“I am very excited to be able to show my skills in a country where the Samurai was born. I will not disappoint you.”

“Everybody here is tough. Since I will be fighting the hometown favorite, my fight will be gathering attention. I would like to use this opportunity and this challenge to become the next big thing.”

“It is so much money I do not know where to start. I believe that the money will come later. So as of now, my focus is to give it all I have to make RIZIN proud that they chose me for a participant.”

General Manager Nobuhiko Takada took the microphone after the drawing, “I am feeling a familiar, comfortable yet tense atmosphere right now. I am just excited to witness the birth of future stars. I hope Ishii can perform in a way where he will make us Japanese fans proud. Ishii’s first accomplishment was winning the gold medal, but we have not seen any outstanding results from him in MMA. I really hope he can use this opportunity to achieve the biggest accomplishment of his career.”