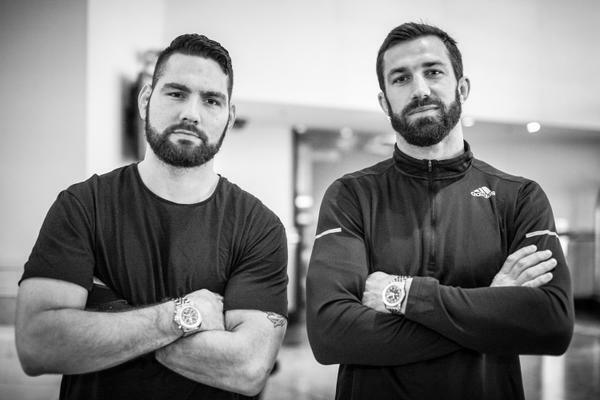 Set for the co-main event of UFC 194: Aldo vs. McGregor, two of the best middleweights are being showcased as the current champion, Chris Weidman makes his 4th title defense against Luke Rockhold. This is being seen by many as the most competitive middleweight title fight in the history of the 185lb division. On paper, both men are very equal in talent and both are even more lethal once the Octagon cage closes.

Breaking down the Takedown: Weidman vs Rockhold

Strengths
-Patience
One of the most impressive things to me about Chris Weidman is his maturity and patience when it comes to the MMA world. He isn’t one to charge forward, blindly wanting to take the fight to his opponent. Instead, he looks for his timing, studies his opponent’s reactions and engages when he knows there is no immediate answer. In his first fight with Silva, they spent to first 30 seconds surveying one another before Weidman knew his speed on the takedown would easily get the legend on his back. Against Vitor Belfort, he waited until ‘The Phenom’ unleashed his best punches before dominating the fight with his ground and pound. Expect the champion to carefully observe Rockhold before executing his gameplan.

-Elite Wrestling
Chris Weidman has some of the best wrestling in the MMA game today and that did not come very easily. The NCAA Division I All American wrestler has been honing his craft since his early days of high school and has become a staple in his career. It’s very hard to deny Weidman a takedown once he has his hands on his opponent and it’s rare to see him throw a lazy takedown attempt. With this imposing trait, do not expect Weidman to simply allow the fight to take place on his opponent’s behalf, if Rockhold manages well on the feet, do not think twice on Weidman taking the fight to the ground with ease.

-Timing
The left hook that shocked the world was thrown out of merely wanting to hit his opponent and to, very bluntly, “shut him up”. Chris Weidman landed a left hook on Anderson Silva that changed his life with a world championship around his waist and a new take on the UFC’s middleweight division. In the heat of the moment, it was deemed a “lucky shot” or a “fluke” to most people. However, in the MMA world, I cannot bring myself to believe in these “lucky shots”. Weidman knew exactly where Silva’s movement was leading him and threw with malicious intent on shocking the world. His elbow placement on Mark Munoz as well as the perfectly timed checked kick in the Silva rematch attests to how well Weidman has a grasp on the timing of strikes. If Rockhold slips in the slightest, expect the champion to capitalize on the small openings.

Weaknesses
-Willingness to One-up
While the champion does have a long list of credentials in his favor, one trait he carries with him is the competitive factor that can end many an athletes’ undefeated streak. Not one to be shown up, Chris Weidman will not back down from a fight even if all signs point to his downfall. One of the tensest moments of his first fight with Silva was how he showed he was not afraid to exchange blows with the most dangerous striker in the world. He stood in front of Silva, taking shots and throwing his own back at the former champion without a glimpse of wanting a takedown attempt. If Rockhold is able to lure in Weidman into staying where he wants the fight, it could very well be a long night for the current champion.

-5 Round Pace
In his second title defense against Lyoto Machida, it was the first time we had seen Chris Weidman fight to a decision. In the later rounds, it was apparent that Chris was in fact, slowing down and absorbing a good amount of shots from ‘The Dragon’. Granted, it was his first time making it to the fourth round in his MMA career, it could be seen as a first time getting his feet wet situation. Regardless, expect a very dangerous Luke Rockhold if the current champion is still not adjusted to 5 rounds, as the former Strikeforce Champion knows what it takes to win a grueling 5 round war.

Edge
-Unyielding Determination
There has never been a doubt in the mind of Chris Weidman that he was going to be the UFC Middleweight Champion. From the day he made his professional debut, nothing was going to hinder his path onto UFC gold and he knew that he was going to defend the title until the day he retired. Anderson Silva was known as being the best, the GOAT, the one to never lose and yet, Weidman knew he was going to beat him and begin his legacy. When the cage door closes, and the lights are on two of the best fighters of the world, Chris Weidman will already have pictured himself having his hand raised and without a doubt being the best champion he can be at 185. If Rockhold come to the fight with the smallest hint of doubt, Weidman will be able to run over him and know that he will retire the UFC champion. 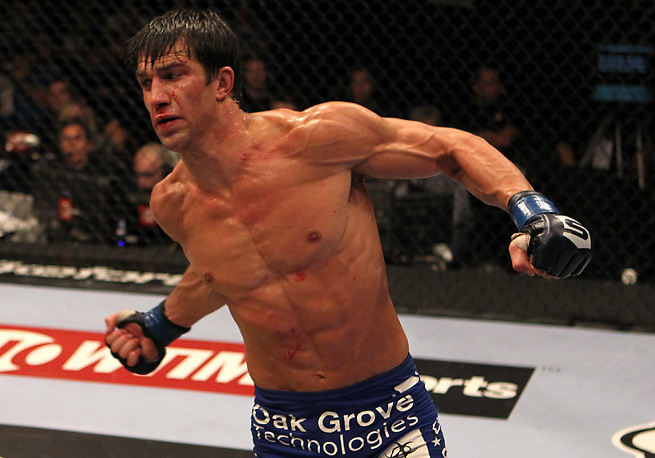 Strengths
-Striking Pressure
Not one to be counted out, Luke Rockhold has been one of the most overlooked fighters since joining the UFC in the UFC/Strikeforce merger, and was set back even more after his loss to Vitor Belfort. However, Rockhold is known for having this concentrated pressure and striking combination that’s been presented in all of his fights. It’s not just a matter of him pushing forward, but pushing forward with this constant progression of strikes. He’ll start off slow, getting the jab going and leg kicks, and then, in almost an instant, he flips the switch on to start his combos. From vicious body kicks against Costas Philippou, to a thudding elbow to Lyoto Machida, the striking of Luke Rockhold is very complete and a gigantic threat to Chris Weidman.

-Jiu-Jitsu Ground Game
Probably the best weapon in the ever expanding arsenal of Rockhold is his very dangerous submission game. He has won the last three of his fights via submission and shows just how much of a veteran of the sport he has become. He knows his positioning, the vantage points, and the key movements to sink in very tight submissions. His inverted triangle kimura hold against Tim Boetsch, has become a highlight reel submission victory in all of MMA and shows how knowledgeable he is when it comes to the ground game. Not only with submissions, but with striking as well, Rockhold is a violent predator when the fight hits the mat and in my mind has the slightest edge over the current champion on the ground.

-Championship Experience
Unlike the current champion, Luke Rockhold has gone the distance on two occasions, defending his Strikeforce strap against Ronaldo Souza as well as Tim Kennedy. He has shown that he understands championship fights and knows how to gauge himself when it comes to the later rounds. Say the fight hits the fourth and fifth round, Rockhold has gone the distance with two of the most veteran fighters to grace the MMA world and has dug deep for the win. Weidman has beaten Machida out on the scorecards but has shown more of a slowing than Rockhold has. If this fight drags into deep waters, expect Rockhold’s moment to shine as he has been in higher caliber fights so deep.

Weaknesses
-Defense Timing
The most recent loss in his career came by a spinning heel kick to the jaw of a TRT-ed Vitor Belfort. While Rockhold was very outward with his opinion of Belfort and the loss itself, it should be noted what exactly happened in the sequence of the last moments of the fight. Vitor feinted with a right hook and instantly went for the spin, while on Rockhold’s side of things, he looked to defend the hook with his left hand but at the last second, moved his head slightly to the right, and his hand down and got caught with the kick. It is a very small timing issue but with the right amount of timing, can end up costing a win for the top contender.

Edge
-Veteran Status
While he may only have three more fights than the reigning champion, Luke Rockhold’s record has the argument of stiffer competition. He has held a championship in another promotion as well as successfully defended it on two occasions against fighters who are in the top of the UFC rankings as well. With this in mind, it should be fairly easy to see how Luke would have more of a better understanding of the fight game and how it is when only the best of the best are in front of you. I believe that Rockhold will have the mental advantage in terms of knowing how many ways a fight can really play out. With this in mind, look for a calm Luke Rockhold wherever the fight may happen to take place.

Final Thoughts
As I stated before, I highly believe that this middleweight fight is the biggest in the entire history of the division. We have two of the best fighters in their absolute prime, who seem to have slight advantages over each other on paper, but transferred into the cage, seem absolute equals to each other. Rockhold may have an advantage in striking but Weidman’s tenacity seems to be the perfect solution for it, Weidman has his outstanding wrestling, yet Rockhold’s impressive submission streak should worry the champion about taking the fight to the mat.

It is very rare we get such an even fight for gold, especially between two polar opposite fighters. If the middleweight division has been low on radar, expect these two to really get the world speaking about the 185lb division. Two elite warriors. 25 minutes for glory, and on the biggest, most stacked pay-per-view of the entire year have the makings for one of the most memorable and closest fights in many years. The two middleweights are set to face off in what is sure to be an instance classic, live from Las Vegas, Nevada inside the MGM Grand Garden Arena on December 12th as UFC 194: Aldo vs McGregor is set to be one of the biggest events of all time.