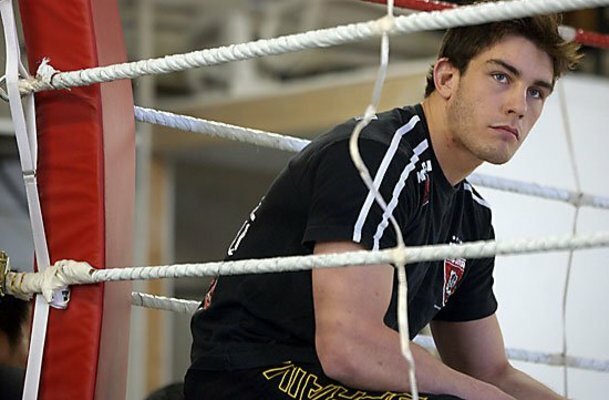 Prestige FC is extremely excited to announce the signing of what is surely to be the biggest and most anticipated grudge match in all of Canada for 2016.

Curtis Demarce and Adam Lorenz square off at Prestige FC 2

After two years of bad blood, the boiling point has been reached and bitter rivals will finally clash as Adam Lorenz squares off against Curtis “The Demon” Demarce.

The featherweight collision will be a prominent bout featured on the Prestige FC 2: Queen City Coronation card presented by 104.9 The Wolf slated for Saturday, March 12th at The Orr Centre in Regina, Saskatchewan. The lineup is topped with Lorenz’s teammate Kurt “The Hurt” Southern vying for the Prestige FC featherweight title against Nick “Nyquil” Rhoads.

“These two have gone back and forth with callouts, trash talk, and bad intentions for a long time. At last, their names are contracts. This is going to be an insane fight,” said Cord Crowthers, CEO & Matchmaker for Prestige FC.

“Neither one of them is going to back down or take a step backwards. It is going to be smash-mouth MMA, an absolute war, and a fight every MMA fan in Canada wants to see.”

Lorenz (7-4) will have the home-province advantage as the 30-year-old hails from Saskatoon, Saskatchewan. Although he has focused on coaching of late, Lorenz didn’t hesitate for one moment when presented the chance to battle his long-time nemesis. Of his seven victories, Lorenz has earned one knockout and two first-round submissions.

The opportunity was equally welcomed by Demarce (15-12), one of Canada’s most colorful and stylish fighters. Originally from Brandon, Manitoba, and now fighting out of Edmonton, Alberta, Demarce has fought notable names throughout his career including his two legendary bloodbaths against Richie Whitson and former UFC star Marcus “The Irish Grenade” Davis under the Maximum Fighting Championship banner. Also noteworthy is the fact that Demarce holds a submission win over Tyson Steele, a training partner of both Lorenz and Southern.

Demarce’s career was stalled for over two years due to serious injuries sustained in a car accident but he is determined to make another run with an eye on the Prestige FC featherweight title that could potentially be worn by Southern after the March 12th event.

Lorenz and Demarce were supposed to tangle a while back, but a failed weight cut kyboshed that fight. Both fighters have vastly different takes on the fight that wasn’t and the fight that will be.

Demarce: “Two years ago, I was going to fight Lorenz but he declined the fight even after I offered him my entire purse. This time there’s no escaping me. I’m the bigger draw, I’m even going to sell more tickets than him in his own province, and then I’m going to put him away. And if Southern wins the belt that night, I’m coming after him.”

Lorenz: “It wasn’t just that he missed weight. I had to hear all about how he fought the weekend before and was hiding it, so the fight was in danger after I had been cutting weight all day. The situation was twice as disrespectful and unprofessional. It was a mess. But yes, he failed to make it happen last time so I guess Mr. Lorenz can give him a rewrite before teaching him a lesson in the Prestige FC cage on March 12th in Regina, Saskatchewan.”

Tickets for Prestige FC 2: Queen City Coronation are now on sale. Tickets can be purchased online at www.ReginaTickets.ca or in person at The Orr Centre box office. VIP Tables & Tickets are exclusively available by calling (306) 580-0340 or by going to www.facebook.com/PrestigeFightClubMMA.

Be in on the excitement of Prestige FC 2.