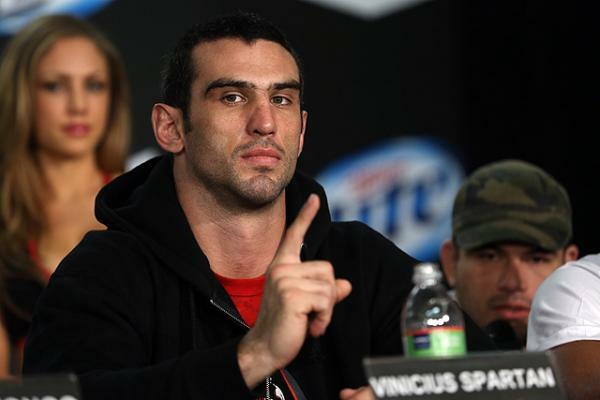 Cheick Kongo will no longer face Brazilian up-and-comer Augusto Sakai at Bellator 150. Instead he will face another Brazilian looking to make a name for himself in the form of Vinicius ‘Spartan’ Queiroz. This fight was supposed to take place at Bellator 106 in 2013, but an ACL injury forced Queiroz to withdraw.

The replacement bout was first reported by mmapremium.com.br.

Queiroz (8-3) returned to action in September following nearly two-years away, defeating kickboxer Ewerton Teixeira via arm-triangle submission in round two. Prior to this he needed just 23-seconds to knockout Lavar Johnson in October of 2013.

Queiroz spoke to MMA Premium about the opportunity and said this: (Translated to English)

“I’m very motivated to have this opportunity again, almost two years ago I had the chance to fight him, but I ended up getting injured. Kongo is a big name, this fight will boost my career! I’m training with a great team, with great athletes, and that will help me, this fight has to be my all. “

The fight will take place on the main card.

‘Bellator 150: Galvao vs. Dantas 2’ will be headlined by a bantamweight title rematch between Marcos Galvao and Eduardo Dantas. Kansas’ own will take the cage in a lightweight bout vs. Bobby Cooper.

The event will take place at the Kansas Star Arena in Mulvane, Kansas on February 26.