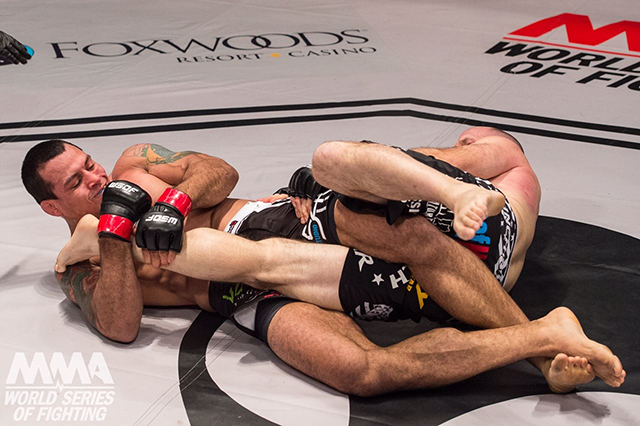 Vinny Magalhães is set to take on Jake “The Honey Bear” Heun in World Series of Fighting 30 on April 2nd, held in the Hard Rock Casino Resort in Las Vegas.  The Rio De Janeiro native’s record stands at 13 wins and 7 losses, ALL of those victories coming by way of submission (11) or TKO (2).  He is a finisher riding a three-fight winning streak and looks to put away Heun (9-4), who also pushes the pace and has finished 6 of his 9 wins.

A 3rd degree black belt, Magalhães trains at Syndicate MMA in Las Vegas, leading the Brazilian Jiu-jitsu program by teaching morning and evening classes every day.  He was first inspired to start training at the age of 13, after watching Royce Gracie and Vitor Belfort fight.  He moved to the US at 19 years old by himself, not able to speak a word of English.

“Initially, I moved just to live off jiu-jitsu,” Vinny explained.  “It’s impossible to make good money in Brazil because there are black belts everywhere.  Like most gyms have like 20 to 30 black belts just training, not even coaching. So the market is pretty competitive there.  If you weren’t there for like 20 years already teaching, it’d be really hard to make any money.”

Then he discovered MMA and it became his focus.  He debuted in 2006, and in 2008 got on Ultimate Fighter season 8: Team Nogueira vs Team Mir.  He won his preliminary and semi-final matches and made it to the Finale, where he lost to Ryan Bader.  Vinny moved on to become the M-1 Global Light Heavyweight Champion and Titan fighting Champion.  Now, he’s continuing his career with WSOF. His last fight was a first-round knee-bar victory against Matt Hamill last October.  He’s also a multiple time jiu-jitsu gi and no-gi world champion, actively competing around the world.  In 2011, he took first place in the Abu Dhabi Combat Club.

Vinny’s career goals are pretty realistic.  “I think it’s pretty common when you first start fighting to say, ‘I want to be in the UFC!  I want to be a UFC champion!’  I’ve been there (in the UFC) a couple of times. You gotta be more realistic about certain things. Right now my goal is to be able to finish my contract with World Series, hopefully with a belt, and then see what’s gonna happen from there, you know?  Could be a renewal with them.  But everything with me nowadays comes to the financial part.  I have a family that I have to support.”

Vinny does professional jiu-jitsu competitions for fun and to stay busy when not fighting MMA.  Fighters usually can’t control when they’re fighting- they have to wait for the promotion to decide and set a match.  “If World Series of Fighting offered me a fight every month, I would never compete in jiu-jitsu again,” Vinny said.  “just because I prefer to fight MMA.”

Jiu-jitsu for MMA has evolved a great deal from what’s used in straight jiu-jitsu competitions.  We often see black belts sitting on the bottom in guard getting pounded and losing, being unable to submit a cautious opponent.  BJJ practitioners must adjust their styles.

Vinny described how he adjusts his game when competing.  “I don’t like to go for leg locks in MMA,” he admitted, “even though in my last fight I won by leg lock, just because it was there, you know.   That was a transition that I was drilling a lot in practice so I felt like it could work.   I feel like it’s not safe-  you end up on the bottom and in a really bad spot.  Overall I feel that my MMA game helped a lot for my grappling competitions  because in MMA, you’re not going to be worrying about guard passes or sweeps and things like that, you’re going to be going for the finish.  So I feel like it made me more of a finisher than I used to be.  Before, I was a regular jiu-jitsu competitor, looking for advantages or points.  Eventually, if there was space, for a submission.”

His opponent Jake Heun is a tough fighter out of Alaksa who also made a run for TUF but lost in the elimination fights.  Recently he’s been winning pretty consistently.

“He’s really tough,” Magalhães said.  “I think he’s 4-1 his last five.  The downfall in his career which could be in my favor is that out of his 6 losses, all 6 were by submissions.  Four official ones, and two losses trying out for the Ultimate Fighter, so I feel like that’s a downfall for him. Overall, I have lots of respect. I’ve fought guys I was supposed to beat before and ended up losing to, so I respect him, but I don’t feel that there’s anything different about him that I haven’t seen yet.”

The 31-year old has a full schedule with teaching at Syndicate in the morning and evening, while training himself in between.  “Pretty much, I’m in the gym all day, training three times Monday, Wednesday and Friday, and twice on Tuesdays and Thursdays.  I do strength and conditioning on top of that.  I feel like I’m in top shape and ready to go.”

“It’s not easy, especially the last couple weeks when I’ve been dieting and all that,” Vinny said.  “When you’ve already been here at the gym for 3 hours training, it’s hard to stay to teach 3 hours as well.  I love what I do, though, I couldn’t ask for something better. I don’t have to be in an office, I don’t have to be sitting down in a chair for hours. I do what I like to do, so it’s fun.”

Despite being an expert grappler, Vinny has been enjoying striking training the most lately.  He trains in the team MMA kickboxing classes and also does private sessions with Muay Thai champ and a head coach Chaz Mulkey at Syndicate.

“I’m definitely not trying to become a striker, but lately I’ve had a lot more fun striking than grappling on sparring days.  It’s not about being challenged or not. I have Tom Lawlor, who’s a world-class grappler, Cory Hendricks, and a bunch of guys who can push me really hard.   If I mess up, they can catch me.  It’s about the knowledge. I’ve been doing this for almost 20 years and I’m a little ahead of most guys at the gym when it comes to grappling, but I feel like now I’m developing my striking game more. It’s always more fun when I’m learning something new and can see progress being made in something.”

Vinny is married with two kids, Vitor who is five, and Nicole, who is almost two.  “I have to be honest, I feel like I’m making their lives pretty boring since I’m always in the gym,” Vinny laughed.  “My son is the one I spend the most time with, because he’s already more independent than Nicole.  Me and Vitor are always doing something together, playing video games… Those things…   Or I take him out to the store to buy something.  Pretty much a big part of my money is spent on them.”

It’s hard to have energy for hobbies when you’re tired from training.

“When I get home and on weekends, I just want to stay home and rest,” Vinny said.  “It’s not like I want to go out and hike and do crazy things.  If I have time, I like traveling and going to places wherever they have beaches to hang out.  After fights I’ve gone to Cancun and The Bahamas with my family.

To finish the interview, I asked how he feels about the fight and if he had any message for his opponent.  Vinny smiled.  “I hope he hasn’t trained at all. I hope he’s fat and out of shape cuz I want to have the easiest fight possible.  I wanna go and get a win, and the easier the better.”