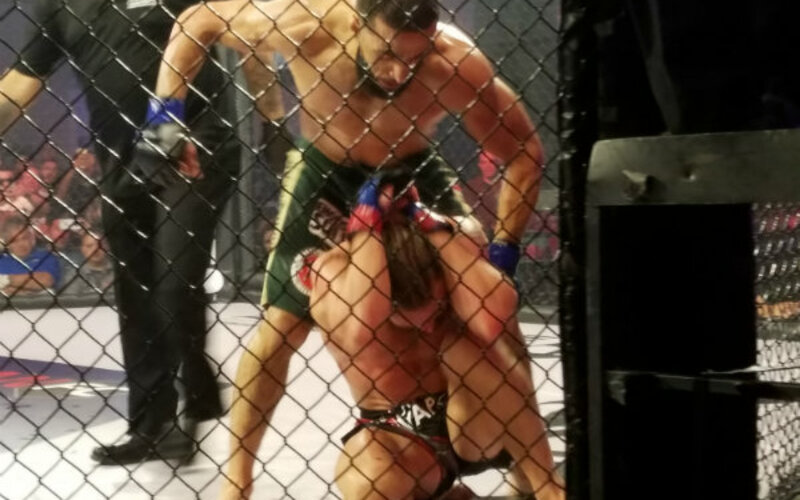 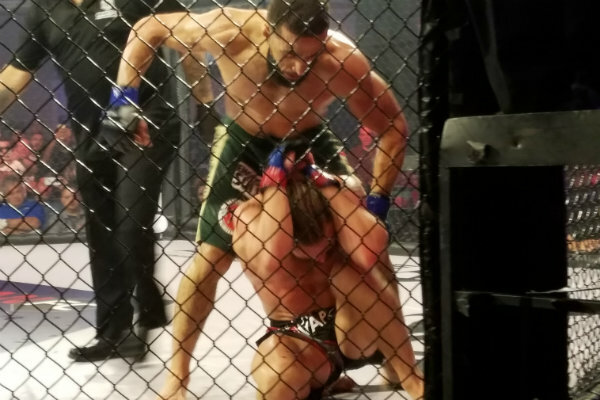 When it comes to touring, the city of Miami, Florida is a tough egg to crack. It’s a well-worn belief among traveling acts—be they musical, sports-related, dramatic, or otherwise—that has shaped how they book events in the Sunshine State. Florida is a peninsula, so basically the farther south you travel past the major cities bordering the centralized Polk County—Tampa on the west coast; Orlando on the east—the less likely folks living north of there will want to make the drive to attend your event. Unless you’re a Pearl Jam, Beyoncé, Cirque de Soleil, Disney on Ice or something like that, you probably are going to be more dissatisfied with the turnout the closer to Miami you get. Even the UFC, the biggest mixed martial arts promotion in the world, has only made the trip all the way down to Miami twice. They’ve since eschewed doing so a third time in favor of visiting the aforementioned centrally located cities.

Which is why when Titan Fighting Championship announced that they were coming all the way down to Miami for not one but two events this summer—Titan FC 38: Muhammad vs. Carl on May 30 and Titan FC 39: Healy vs. Cavalcante on June 10—it was a ballsy move. Despite hosting some of the finest fight camps in the country, South Florida is a bit of a briar patch for touring businesses trying to gain steam.

I was admittedly dubious when I arrived at the event tonight at Miccosukee Resort and Gaming located on the westernmost point of civilization south of the I-75. The venue is of modest size and can comfortably fit a couple thousand people, in addition to a regulation size cage and a VIP area, before things begin to feel cramped. When I got there at around 6:20 p.m.—forty minutes before the advertised start time of the event (it wound up beginning at approximately 7:35 p.m.)—my prognosis felt apt.

But people began to file in. And then more people arrived. The place was filling up fast. Surveying the swelling crowd, a mixture of people ingrained in the sport and fight fans eager to see some national-level MMA action, I counted about 1,500 attendees by the time the co-main event commenced. That’s close to max capacity for the Miccosukee Entertainment Dome. The show was a resounding success after all. It felt great to be wrong. 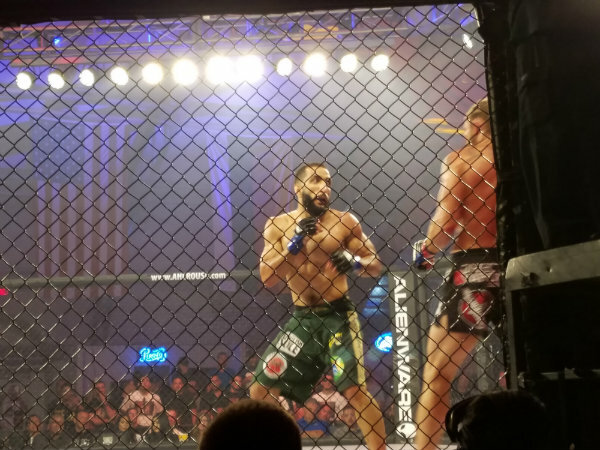 Belal “Remember the Name” Muhammad had the Eye of the Tiger from the word “go.”

There’s a misconception that unless an MMA event is littered with finishes it’s a categorically boring affair. Titan FC 38: Muhammad vs. Carl was a perfect antithesis to that assertion. Despite having only one legitimate finish the entire evening, the card was solid from beginning to end.

Credit is due to Titan FC CEO Jeff Aronson and COO Lex McMahon, whose pairings for the night all resulted in closely contested bouts. While there were some instances where fighters failed to capitalize on opportunities to finish, every bout had some genuinely entertaining moments.

Take the second bout of the night between bantamweights Jose Torres and Reynaldo Walter Duarte, for instance. Torres (now 2-0), the former top-ranked amateur fighter in the world, is a former Division II collegiate wrestler who spent some time training at team Jackson-Wink ahead of his second appearance inside the Titan cage. His opponent, “Reyzinho” Duarte (now 8-9), is a 35-year-old who accrued a rather pedestrian record while competing largely at flyweight. This was a showcase fight for Torres and he certainly delivered, shredding Duarte in the clinch and picking him apart at range when he wasn’t going for the takedown. But there was no quit in Duarte, who stayed in Torres’s face until the final bell sounded. The new kid got his win, but the old dog didn’t go down without a fight and kept pushing back the entire time.

Aside from that one-sided trouncing and the fight that capped of the night, most of the eight bouts could easily have swung either way on the scorecards. Some judges’ rulings, like the head-scratcher of a 30-27 score gifted to Bruce Lutchmedial in his unanimous decision win over Pablo Alfonso, were a bit obtuse. Mostly, there weren’t any grave errors of note.

In the opening bout, former UCMMA featherweight and bantamweight champion Cory Tait couldn’t seem to pull the trigger against Andrew Whitney, who won despite taking his foot off the gas at times when doing the opposite would have been wiser. (Please excuse the mixed metaphors.)  Tate certainly has promise, but he needs to take more chances in there. The same, to an extent, can be said for Whitney. 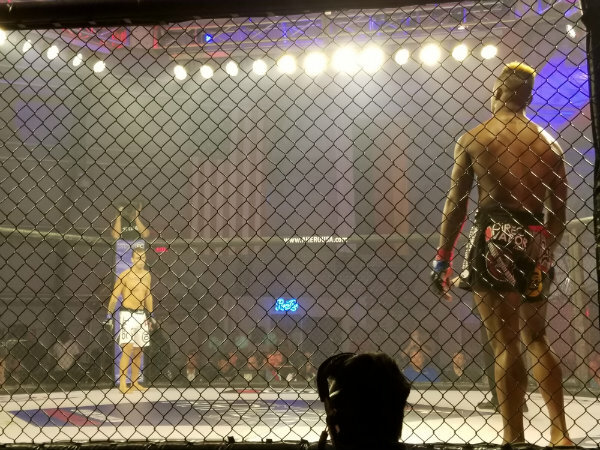 Caio Rocha and Peter “The Joker” Petties mean mug one another from across the Titan FC cage.

The third fight of the night pitted Peter “The Joker” Petties against Caio Uraguai Rocha. A natural, explosive athlete, Petties’s insistence on staying true to his nom de guerre and clowning around may have cost him the fight, as the more measured and persistent Rocha eked out a split decision. I had it going for Petties, whose style is an infuriating mix of Alex Caceres’s mock-grinning and Uriah Hall’s single strike potshotting, but I’m totally OK with it swinging in favor of the Blackzilian Rocha, who moved to 5-0 with the win.

Were it not for the main and co-main events, the Alfonso/Lutchmedial bout would have easily been my pick for fight of the night. Agreeing to the contest on short notice just two weeks away from the event, both men showed just how important staying ready and in shape is when it comes to taking advantage of opportunities. I wouldn’t be averse to seeing a rematch either, as I had Alfonso winning a close decision. BONUS Favorite Moment of the Night: While Alfonso had Lutchmedial’s back, he became aware that Lutchmedial’s girlfriend—or wife; I don’t know which—was screaming maniacally at him from the VIP area. He paused his attack on Lutchmedial, narrowed his eyes at her, smiled and started making kissy faces at her. She proceeded to absolutely lose whatever composure she had remaining and nearly doubled in half trying to climb over the railing separating her from the cageside area.

Chase Sherman vs. Jack May, the only heavyweight match on the card, was a shoo-in for guaranteed violence—at least until May injured his left leg (probably his knee) throwing an ill-timed high kick. He immediately collapsed on the ground, crying out in agony as the cageside physicians rushed to his aid. At 35 years old and on a three-fight losing skid, physical rehab is precisely the last thing May needs right now. For Sherman, it was a win, but a disappointing one. The six-foot-four Alan Belcher pupil is 9-1 and, at only 26 years old, might have a bright future ahead of him. A result like this isn’t going to add much to his highlight reel, unfortunately.

Former Titan FC flyweight title challenger Pedro Nobre rebounded with a split decision win over a game Sid Bice in the sixth contest of the evening. Bice failed to win either of the first two rounds, so he needed a finish going into the third. However, Nobre is an extremely difficult fighter to put away and he kept Bice at bay enough to secure a split decision victory. 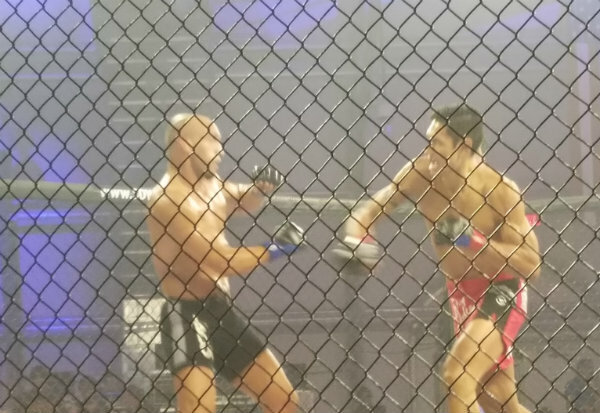 Sometimes a fight is so close that there are literally no losers. Sometimes it’s so close there aren’t winners, either. Yosdenis Cedeno vs. Jason Novelli is such a fight.

Jason Novelli vs. Yosdenis Cedeno… Man, what a barnburner. Novelli, the considerably taller and longer fighter, held Cedeno at the end of his reach with sharp straights and stinging kicks for the majority of the first round. Cedeno picked up the pace in the second and appeared to have figured out how to work around his opponent’s range. Although he was noticeably rocked by a punch that landed flush, Cedeno returned in kind and I had him winning the second. I saw the third round as a coin flip. Evidently the judges saw it the same way; the fight was a split draw—29-28 for Cedeno, 29-28 for Novelli and 29-29. I’d like to see a rematch.

Finally, the main event commenced and it was an eye-opener. Steve Carl is tough as nails and good almost everywhere, but Belal Muhammad put on an absolute clinic, stuffing takedown after takedown and making Carl pay for exchanging with him on the feet. By the end of the second round, the former WSOF welterweight champion’s visage looked like a crimson Jackson Pollock. Muhammad was laser-focused from the second the opening bell rang and he savaged his opponent brutally until Carl’s legs could no longer keep him up. Muhammad, now 9-0, secured his biggest win tonight. He may not carry one-punch knockout power, but what he lacks in brute strength he makes up for in technique. His shifting, not unlike that of Prince Naseem Hamed in its smoothness, was a sight to behold. Keep an eye on him; Titan FC may not have him for long.

A freelance MMA, entertainment and business journo born, raised and residing in Miami, FL, Jesse Scheckner is a former semi-serious musician, cinephile and recovering ne’er-do-well who still believes Mickey Rourke’s finest performance in film has yet to come. He isTuffGnarl.com's editor-in-chief and the 2014 MMA Media Correspondent winner at the Florida MMA Awards. Follow him on Twitter @JesseScheckner to talk about the stuff he writes about with him.