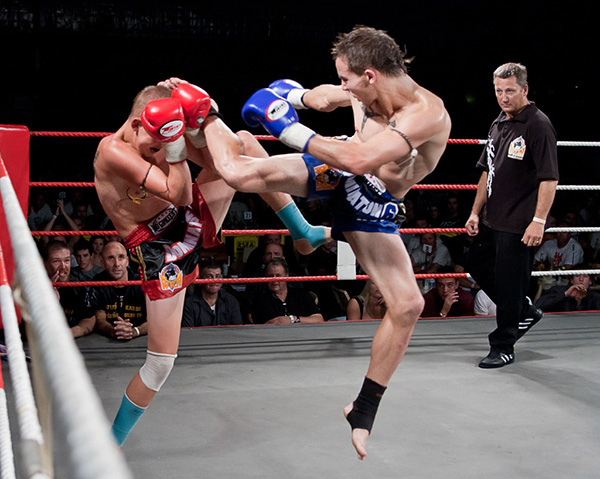 As more and more kickboxing is making its way on to my TV and computer screens, I can’t help but wonder: Why are all these fights not under Muay Thai rules? I see the lack of clinch work, knees, and elbows and shake my head. The rules are out there, as the Association of Boxing Commissions has a Unified Rules of Muay Thai developed, in part, by Nick Lembo of the New Jersey State Athletic Control Board. The problem is that they are not being used. While it is understandable that K-1 used the Kyokushin Karate-based ruleset that they developed, it’s insane to me that Lion Fights is the only promotion using Muay Thai rules. Why aren’t Glory or Bellator Kickboxing using the ABC’s Unified Rules for Muay Thai instead of the same, stale K-1 system? I’ll look at some of the reasons given, and their refutations, after a quick explanation of the rules.

First, most kickboxing promotions these days use what is known as the K-1 Rules. This means that clinches, elbow strikes, trips, and other takedowns used in Muay Thai fights aren’t legal. This is due in part to K-1’s Japanese origins, with the rules inspired by Kyokushin Karate. It has continued on this way with little development, and has led to kickboxing that, for North American audiences at least, is less than engaging. In Muay Thai, you are allowed to strike using your fists, legs, knees, and elbows. You are also allowed to engage in a clinch with your opponent to not only strike with him, but take him down with a variety of trips, sweeps, and dumps. This makes it akin to a stand-up only version of MMA, which would be easier for crossover fans to understand.

One of the arguments against the Muay Thai ruleset, as explained to me in an episode of the Eye of the Storm MMA Podcast by Glory fighter Josh Jauncey, was that elbows can end fights too quickly due to cuts. While that is certainly a possibility, I’d like to think the low number of cut stoppages due to elbows in MMA disproves the idea that the technique somehow ends fights too quickly.  Even Lion Fights, one of the only large kickboxing organizations using Muay Thai rules, doesn’t have an excess of elbow-induced cut stoppages. So, it seems, the “too many early stoppages” arguments is bunk.

Another excuse given for why the big boys in kickboxing don’t use Muay Thai rules is that fights will end up in the clinch and stay there. First off, Muay Thai is a little different from boxing in terms of what you can do in the clinch. A Muay Thai clinch is not two guys leaning on each other throwing rabbit punches at their opponent’s kidneys.  Because strikes with the knees and elbow are allowed, clinches under Muay Thai rules are more often than not violently entertaining affairs. It’s far different from, say, a Floyd Mayweather hug-fest of a boxing match, which is an image that comes to mind for many when thinking about the clinch in North American striking sports.

So, given these reasons, it’s time for the two major kickboxing organizations, Glory and Bellator Kickboxing, to look at changing up the rules they use. It’s time for these promotions to set themselves apart from K-1 and bring some entertainment back to the sport of kickboxing. With an accepted Muay Thai ruleset available, there is no longer any excuse to disallow effective techniques from being used in their fights. If either company wishes to be successful in North America, it’s a change that needs to be made.