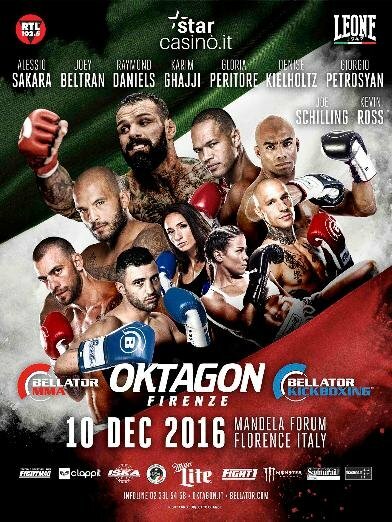 At a press conference hosted by Bellator MMA’s Scott Coker in Florence, it was announced that Bellator was returning to Italy with another combo-event featuring kickboxing and MMA on December 10 from the Mandela Forum in Florence.

The MMA portion of the double-feature has been dubbed ‘Bellator 167’. It will be headlined by Italy’s most popular MMA fighter Alessio Sakara (18-11, 2NC) as he takes on fellow UFC-vet Joey Beltran (17-13, 1NC).

Sakara is coming into this fight following a massive knockout win over Brian Rogers at ‘Bellator 152: Pitbull vs. Souza’. Beltran comes in following bouts in multiple divisions from heavyweight to middleweight and has been in the cage with big names across multiple weight classes and promotions. These names include Rampage Jackson, Kendall Grove, Emanuel Newton, and even current UFC heavyweight champion Stipe Miocic.

Expect these two to stand toe-to-toe until someone falls onDecember 10.

Meanwhile, ‘Bellator Kickboxing: Florence’ will see Denise ‘Miss Dynamite’ Kielholtz (45-3) take on Gloria Peritore (11-1-1). Peritore beat Kielhotlz this past June. When they meet again in Florence, it will be a  flyweight rematch to decide the inaugural Bellator Kickboxing Female Flyweight Champion. Also on the card; Italian kickboxing legend Giorgio Petrosyan will make his debut with the promotion. The always exciting Raymond Daniels will also compete on the card, along with Kevin Ross. Joe Schilling will take on Italy’s Vittorio Iermano.

‘Bellator 167: Sakara vs. Beltran’ and ‘Bellator Kickboxing: Florence’ are scheduled to take place on December 10 in Florence, Italy.  ‘GLORY: Collision’  will be in Germany that same night with Rico Verhoeven vs. Badr Hari in a heavyweight super fight.