Finding an Opponent for the Return of Ronda Rousey 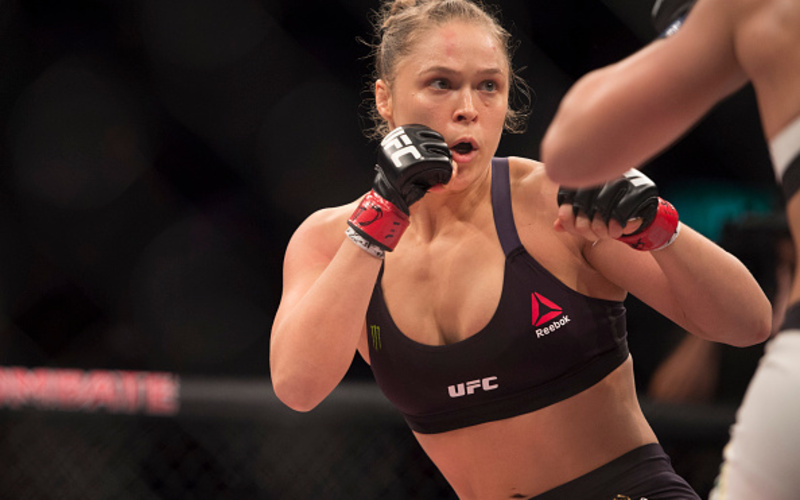 The last image that MMA fans have in their memory banks of Ronda Rousey is her getting walloped with a perfectly placed headkick from Holly Holm. That image stands out above all the highlight reel finishes that Rousey has had in her Mike Tyson like run of dominance through the UFC women’s bantamweight division. A women we watched run through opponent after opponent was knocked out in such a brutal and memorable fashion that in public perception that one loss now outweighed the all of those dominant victories. Suddenly an undefeated champion who was seemingly invincible had something to prove.

And now almost a year after her first career loss we still have yet to see Rousey back in the cage. We’ve heard people all over the MMA world if she would ever fight again and meanwhile the one who slayed the dragon, Holly Holm has since lost the title she won in her incredible upset. Add in the fact that the woman who took it from Holm, Ronda’s longtime rival Miesha Tate, also lost the bantamweight title at UFC 200 to Amanda Nunes and suddenly there aren’t any obvious fights for Ronda’s return. With rumors that she may fight at the end of the year, possibly at UFC 207 on December 30th, it begs the question of who her opponent should be.

The obvious answer here is that Ronda should fight Holly Holm when she returns to the UFC cage. The only loss on Ronda’s record came at the hands of ‘The Preacher’s Daughter’ and Rousey’s journey to avenge that lone loss is an easy sell to the public and makes a lot of sense in terms of matchmaking. That answer becomes a lot less obvious however when you look at Holly’s fights since defeating Rousey; where she not only lost her championship via submission but also lost a decision to Valentina Schevchenko at UFC on Fox 20. The redemption story is still very much an easy sell to the public and there’s definitely big money in the rematch but if Ronda wants an immediate title shot it would be hard to argue with her after such a long dominant reign as champion. If that’s the case then we may have to wait even longer for the long awaited Rousey-Holm rematch.

If Ronda does indeed want an immediate chance to reclaim the women’s bantamweight crown she will have to take it from one of the most ferocious female strikers in the UFC, Amanda Nunes. Nunes won the title at UFC 200 in July when she absolutely wrecked Miesha Tate, battering her and choking her in the first round. Given the knockout power of Nunes and the difference in the level of striking skill between her and Ronda at first glance you might be inclined to favor Nunes. However, the striking game of Holm that took down Ronda Rousey is built on distance, movement and using a heavy counter striking game plan while keeping a charging Rousey at kicking range, and Nunes is almost the exact opposite when it comes to her striking game plan.

Nunes relies on one big swarm at the beginning of her fights in which she empties a lot of her gas tank and if her opponent can withstand that initial storm, she has tended to fade later in fights. Nunes brings the pressure and rushes her foe to try and end the fight early. What’s the absolute last thing you want to do when fighting Ronda Rousey? Rush in on her and put yourself in clinching range because if you get close enough for her to grab you, you’re going for a ride. If you go back and watch Tate’s first fight with Ronda she tried this strategy and rushed Ronda right away throwing huge bombs and promptly got tossed on her head. Nunes is a very powerful and technical striker but as they say “styles make fights” and I would bet the house on Rousey if those two ever collide.

Say her name three times out loud and she will show up in Brazil and beat your ass without breaking a sweat. Cris Cyborg may have just gotten into the UFC spotlight in her last two fights but a match up against Ronda Rousey has been long talked about. The unstoppable force meets another unstoppable force with nuclear power in her hands. If you believe Dana White these days (which is getting harder and harder to do) this is the fight that Ronda Rousey is saying that she wants. Now we should all probably wait until we actually here it come directly from Ronda’s mouth before we believe that, but if it’s true it will easily be the biggest women’s fight in MMA history. It’s Chuck Liddell vs Wanderlei Silva all over again.

The biggest problem with making this fight was showcased recently when the MMA world saw the toll that the 140 weight cut took on Cris Cyborg when she cut down for her fight against Lina Lansberg. Cutting to 135 pounds would no doubt be a monster cut for Cyborg, but if ever there was a fight worth the cut, it would be this one. This would be the biggest money fight of Ronda’s career and would also be the toughest opponent she has ever taken on. Cyborg is without a doubt the hardest hitting woman we have ever seen in the UFC and if Ronda could pull it off it would make her maybe a bigger star than she ever was before the Holm fight.

If we assume that with another loss Ronda could retire for good then this starts to look like the fight to make. With a win Ronda finishes her redemption story and cements her place as one of the biggest superstars in combat sports history. Lose and Ronda gets a gigantic final pay day and rides off to Hollywood, and the UFC has a new queen of the women’s ranks in Cyborg and a Brazilian star they can build on.