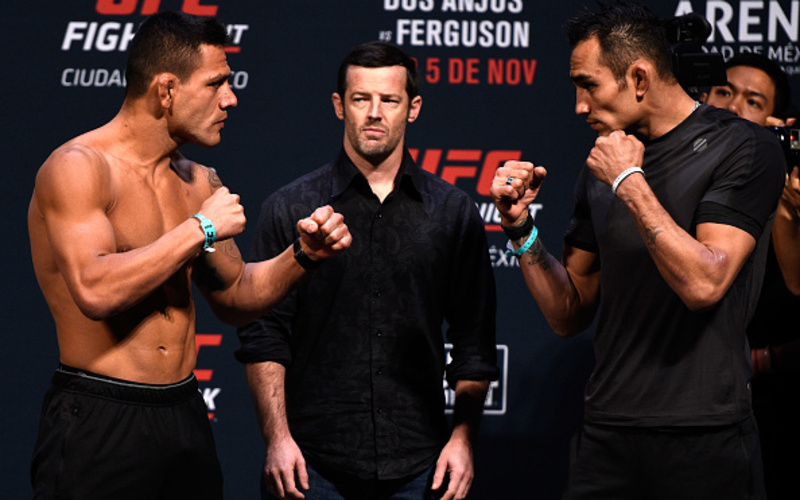 UFC Fight Night 98 brought tons of thrill & excitement to MMA fans Saturday night as the company made its return to Mexico City, Mexico. The event was headlined by top contending lightweights Tony “El Cucuy” Ferguson and former champion Rafael dos Anjos. The co-main event featured two more lightweights, veteran Diego “The Nightmare” Sanchez and UFC newcomer Marcin “The Polish Prodigy” Held. Also on the card was a battle between Mexico’s Martin Bravo and Peru’s Claudio Puelles to crown a winner of The Ultimate Fighter: Latin America 3. Following Saturday’s event, it is time to provide options for fights to make after UFC Fight Night 98.

Tony Ferguson (23-3)
Last Opponent: Rafael dos Anjos
Who Should be Next: Winner of Eddie Alvarez vs. Conor McGregor

Tony “El Cucuy” Ferguson gave one of the best performances of his career, defeating the former lightweight champion Rafael dos Anjos. His ability to absorb damage and constant pressure played an important factor in earning the unanimous decision victory. Ferguson is one of the most diverse, tricky, and entertaining fighters the 155 pound division has to offer. He currently rides a nine fight win streak, the third longest active streak in the UFC. Ferguson deserves a title shot; however, there are many factors that will play into the title picture. Khabib Nurmagomedov vs. Michael Johnson takes place at UFC 205 next week, along with a lightweight title fight between current champion Eddie Alvarez and featherweight champion Conor McGregor. Let’s give it a week, shall we?

Diego Sanchez (29-9)
Last Opponent: Marcin Held
Who Should be Next: Evan Dunham

Diego Sanchez is back in the win column after scoring a unanimous decision victory over 24 year old Marcin Held. There were occasional submission attempts from Held, but they were never enough to slow down “The Nightmare.” Sanchez now sits at 2-1 in 2016, defeating Jim Miller in March and dropping his only TKO loss in his 35 fight-career to Joe Lauzon in July (not counting his loss to BJ Penn). I think we can respectfully agree Sanchez will never be at the top of competition again. However, he is a true veteran of the sport. His heart and personality keeps him going strong, which is inspirational to see. I wouldn’t mind to see a clash between he and Evan Dunham, another UFC veteran of the sport riding a four-fight win streak. It’s surprising to me they have yet to face off…. now feels like the right time.

Ricardo Lamas (17-5)
Last Opponent: Charles Oliveira
Who Should be Next: Winner of Frankie Edgar vs. Jeremy Stephens

Ricardo Lamas is now one of three that can say he submitted grappling phenom, Charles Oliveira. Despite a few submission scares in the first round, Lamas came back to capitalize on the exposed neck of Oliveira to secure a second round guillotine choke. The victory was the fifth submission of Lamas’s career and his first finish since defeating Dennis Bermudez in November of 2014. Lamas is right back in the mix of things, and a high-ranked opponent is definitely in his future. An upcoming fight at UFC 205 is a battle between Frankie Edgar and Jeremy Stephens. The winner of this fight would be in solid divisional placement, and a fight with Ricardo Lamas would be crucial for title shot discussion.

Martin Bravo (11-0)
Last Opponent: Claudio Puelles
Who Should be Next: Fernando Bruno

Martin Bravo remains undefeated as a professional, defeating Claudio Puelles to become the winner of The Ultimate Fighter: Latin America 3. Bravo holds an impressive resume for only 23 years old, having nine of his victories coming by way of submission or knockout. Bravo may be a future face in the lightweight division, but he has a lot of work to do and improvements to make (like any fighter). A reasonable opponent next for Bravo could be Brazilian Fernando Bruno who is coming off a third round submission loss to Glaico Franca and a unanimous decision loss to Gray Maynard. Bruno is in need of a win to keep his UFC hopes alive.

Beneil Dariush (14-2)
Last Opponent: Rashid Magomedov
Who Should be Next: Dustin Poirier

Beneil Dariush ended the 12-fight win streak of Rashid Magomedov by earning a unanimous decision. The striking of Dariush has improved drastically since coming to the UFC along with utilizing effective knees in the clinch and grappling. Dariush’s only slip in recent performances came against Michael Chiesa in April, losing by submission. However, he got back to action in June by knocking out James Vick under five minutes and earning this victory over Magomedov. I am interested in a fight between Beneil Dariush and Dustin Poirier. Some may not like my decision here, since Dariush debatably defeated Michael Johnson who knocked out Dustin Poirier. I find this fight appropriate for both men, as both Dariush and Poirier are just a tad behind those at the top of the lightweight division (ex. Alvarez, Ferguson, Nurmagomedov, Johnson, and Barboza to name a few).

Alexa Grasso (9-0)
Last Opponent: Heather Jo Clark
Who Should be Next: Joanne Calderwood

Alexa Grasso did not disappoint in her UFC debut, earning a dominate decision victory over Heather Jo Clark.  Her striking was key in this win, along with great pressure throughout the fifteen minutes. This win keeps the 23 year old undefeated  with four wins by TKO and five by decision. Grasso is a hot prospect who made a big statement Saturday night. She is destined for a Top 15 spot in the rankings along with receiving tougher competition as she develops. I believe Joanne Calderwood is a suitable, challenging opponent  that Grasso could test herself against next. “JoJo” is coming off a first-round submission loss in September to Jessica Andrade. Getting a win against an undefeated prospect like Grasso would be significant for Calderwood’s career.

Rafael dos Anjos (25-9)
Last Opponent: Tony Ferguson
Who Should be Next: Will Brooks

Leaving Kings MMA and not training at Mexico City’s elevation more than likely assisted in Rafael dos Anjos’s loss to Tony Ferguson. Dos Anjos took the lightweight title from Anthony Pettis in March of 2015, following it up with a first-round TKO victory over Donald Cerrone in December. He lost the belt to Eddie Alvarez by knockout in July, and now has another loss on his resume from Saturday night. Dos Anjos is in need of a victory, but still resides at the top and is one of the best fighters in the lightweight division. A bout betwen former Bellator lightweight champion Will Brooks and Rafael dos Anjos would be a very interesting fight. A possible win for Brooks would be a great opportunity , who dropped a controversial loss (in multiple ways) to Alex Oliveira in his last fight.

Marcin Held (22-5)
Last Opponent: Diego Sanchez
Who Should be Next: Gilbert Burns

The gameplan and fight IQ of Marcin Held seemed to confuse everyone watching. Despite finding success on the feet , Held stuck to his roots and kept shooting for the leg of Diego Sanchez. This, along with exhaustion (more than likely due to elevation) caused Held to lose a unanimous decision. There is plenty of time for development in the 24 year old’s game. I think a fight with Gilbert Burns could be something very enjoyable, as both have tremendous credentials in grappling.

Charles Oliveira (21-6, 1 NC)
Last Opponent: Ricardo Lamas
Who Should be Next: Brian Ortega

This weekend was very rough on Charles Oliveira. “Do Bronx” missed weight on Friday by nine pounds, was made to stay underneath 165 pounds come Saturday in order for the fight to happen, lost 30% of his purse, and got choked out by Ricardo Lamas’s guillotine in the second round.  He has now lost three of his last four fights, but they have come against top contenders. Oliveira is a notable name to many casual fans in the MMA world possessing victories over the likes of Jeremy Stephens, Darren Elkins, Nik Lentz, and Hatsu Hioki. Giving him opponents that are sure to spark entertainment is almost a necessity. A fight with undefeated and improving prospect Brian Ortega would be fun, only if Oliveira is not forced to move up in weight class. Because trust me, the UFC can do that.

Claudio Puelles (8-2)
Last Opponent: Martin Bravo
Who Should be Next: Cesar Arzamendia

Claudio Puelles may have suffered a TKO loss to Martin Bravo, but we must not forget he is only 20 years old. Having the opportunity to compete on The Ultimate Fighter at such a young age is an honor and a tremendous learning experience. Puelles is now 7-2 as a professional with two knockouts and four submissions. I feel like there are not many options for Puelles besides someone lower-ranked like Cesar Arzamendia. Both men are going to be desparate for a win in order to stick around the UFC. I have full respect for both men, but the loser of this fight should be released.

Rashid Magomedov (19-2)
Last Opponent: Beneil Dariush
Who Should be Next: Paul Felder

Rashid Magomedov’s loss to Beneil Dariush was his first defeat since April of 2010. The Russian still holds an impressive resume with two losses from 21 professional fights and eight knockout victories. Magomedov now moves to 4-1 in his UFC career and sits around the middle in the division. His striking technicality is something very impressive, but his clinch work needs improvement. Paul Felder recently dropped a third round TKO loss to Francisco Trinaldo. A bout between two stand-and-bang fighters like Felder and Magomedov could produce fireworks and would be an appealing fight for the fans.

Heather Jo Clark (7-6)
Last Opponent: Alexa Grasso
Who Should be Next: Randa Markos

Heather Jo Clark losing to Alexa Grasso is not a bad loss; however, she took a beating in this one. Clark has now lost two straight decisions, first to Karolina Kowalkiewicz and now to Grasso. Before these two fights, Clark hadn’t fought since December of 2014. A lot of activity is happening higher up in the strawweight division, but this loss is definitely a set-back for “Hurricane.” I could see a bout in her future with Randa Markos, who possesses a similar record and is coming off a first-round submission loss to Cortney Casey in August.