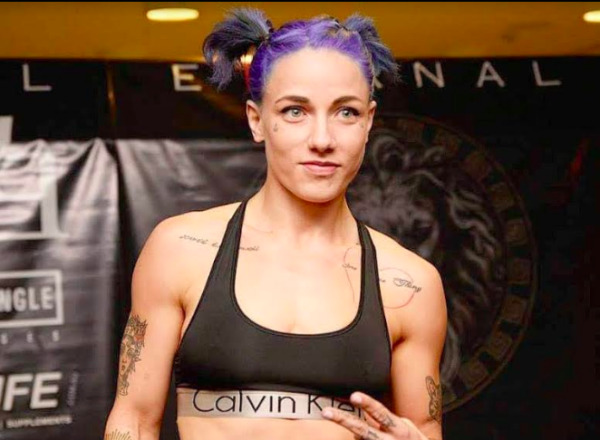 Jessica Rose Clark (6-2), otherwise known as “Jessy Jess,” came to the USA on a quest to fulfill her dreams as a successful professional fighter.  She’s been journeying from childhood, being the oldest of eight children of a single mother, growing up moving around frequently in Australia.  She was homeschooled for many years before entering a public school system in 5th grade, jumping straight to the head of her class, which surprised her teachers.

She was introduced to martial arts by her boyfriend, and first competed in a kickboxing match.  She fell in love with the sport from there, training first at Integrated MMA in Brisbane, and later moving to the Australian Top Team when life changes and relationships swept her away.  She had given University a shot, studying marketing and sports management, but found it stifling and wanted to focus on her fighting career.

Jessy Jess Clark back in Action at Invicta 20

The Aussie moved to the States in September of this year. “I came to the US to get away from an ex-boyfriend and be able to focus fully on training,” Jessy said.  “In Sydney, I was working three jobs and trying to train around that, so I knew that if I wanted to fight on an international level, I needed to be in a facility with higher level fighters than me and higher level coaches where I could train full time and not have to focus on work.”

She visited Syndicate MMA, one of the most popular MMA gyms in Las Vegas.  Coach John Wood leads the MMA team, which include many other female fighters such as Jamie Moyle (UFC/ TUF 24, Invicta), Roxanne Modafferi (Invicta, TUF 18), Jessica Bakan (Invicta), Serena DeJesus (Tuff-N-Uff), and more.

“I met John and Jamie last year when I fought at Invicta 13. I loved Vegas and I came out here (to Syndicate) to do part of my weight cut. I loved the facility and I’ve always had a feeling that I was gonna end up back here.  When I contacted John to say I was coming out for a bit, he asked me to be a part of Roxanne’s camp (to fight Maia for the Invicta title) and I was like, ‘Yeah cool that’s something to do, that’ll keep me here for a few weeks.’ So I came to train with them and after three days of being here, I decided this is where I wanted to stay.”

Clark talked with love about the Australian Top Team back home, and some of the differences between gyms.  The biggest thing for her was finding a place with good training partners on a higher level than her.  “My team back home is really good and we’ve got 40 competitors who are active and who are really really doing well, but it’s more of an amateur level.  Our coaches are really good coaches, but they’re just not as experienced as what you guys out here are. We don’t have the wrestling base out there and I find that makes a difference in MMA.  I find that a lot of Aussies have got legit striking but we lack in wrestling, so I always knew that coming out here would be what makes that difference between being a decent Australian striker and being a legitimate MMA fighter.”

Now she’ll face Pam “Bam” Sorenson (4-1) in her second showing in the Invicta cage, on November 18th in Kansas City, MO.  This Minnesota resident fighting out of the Cellar Gym in Minneapolis is on a two-fight winning streak, with her last fight being a TKO victory this September in King of the Cage.  Pam began her martial arts career with kickboxing and then grappling.  After entering some tournaments, she thought MMA would be the next challenge.

Clark is her newest challenge.

Clark seems disinterested in her opponent and left the game planning to her coach.  “I know nothing and have no thoughts of her,” she said with a smile. “I think we’re the same size…  Obviously, I’m going to win. I wanna win. I will win.  But I would like a good two rounds of fight, honestly, because I’ve been working so much on so many different things.  I really would like it to be a longer fight rather than a shorter one. Obviously you wanna finish the fight but I have a lot of shit that I wanna do, too.”

To relax, Clark likes to watch movies and play XBox.  “That’s pretty much all I have time for.  It’s so late at night when I get home, all I do is watch movies and go to bed.  For fun, I’ve been going hiking a lot since I’ve been out here, which has been really cool. And going to different food festivals and stuff like that. I love to eat, so if I can eat, then on my day off, I like to go eat at as many different places as I can. And then that’s kind of how I spend my fun day.”  She is known to be a taco connoisseur.

Don’t miss Invicta 20 on November 18, live on UFC Fightpass, held at the Spanish Rite temple in Kansas City, MO.  The event is headlined by a title fight between Tonya Evinger and Yana Kunitskaya, followed by Angela Hill vs Kaline Medeiros for the strawweight title.

The fight card for Invicta FC 20 can be found below: