Two of the best fighters in the world are set to meet in a Champion vs. Champion fight in the main event of KSW Colosseum in May. Reigning KSW middleweight champion Mamed Khalidov will take on reigning KSW welterweight champion Borys Mańkowski in a super fight of sorts!

The match-up was announced by the promotion early Wednesday morning.

Khalidov (32-4-2) has finished 29 of his professional victories. He is primarily known for his grappling prowess and the ability to end a fight in the blink of an eye and has won 12-straight, mostly by doing just that. Though, he does have some stellar knockouts on his resume as well. Just ask former foes Michał Materla and Rodney Wallace.

Mańkowski (19-5-1) trains with some of Poland’s finest and has been rewarded with six-straight victories as a result. After winning the title in mid-2014, Mańkowski has defended it three times in four fights, with one bout being a non-title open weight contest. His last two victories saw him choke out UFC-vet Jesse Taylor, as well as dominate another UFC-vet in John Maguire for 15 minutes.

The massive event simply dubbed; “KSW Colosseum” is set to take place on May 27 in Warsaw, Poland at the Stadion PGE Narodowy.

Also on the card; Fernando Rodrigues Jr., Tomasz Narkun, and Marcin Wrzosek will be looking to defend their titles. The event will also feature the return of Polish strongman Mariusz Pudzianowski. 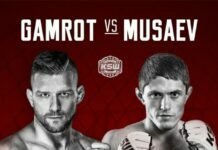