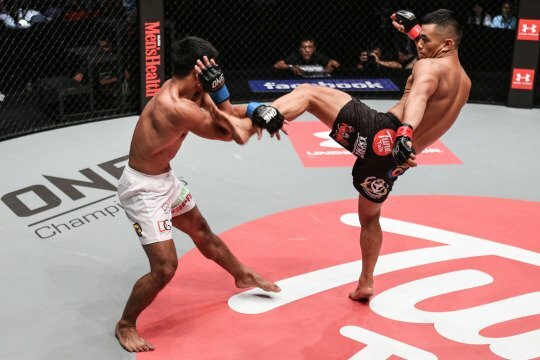 This weekend is UFC 208 live from Brooklyn. A less-than-stellar card in comparison to things we’ve seen recently, but still solid enough nonetheless. As per usual, with a UFC event on, nine times out of ten, anything else fight-related that weekend is stuck in its shadow.

Ev Ting vs. Kamal Shalorus is one of few must-watch fights of the weekend

This weekend is not the biggest weekend for MMA, but tomorrow morning ONE Championship returns. ‘ONE Championship: Throne of Tigers’ will take place at the Stadium Negara in Kuala Lumpur. The main event will be a lightweight showdown between “E.T.” Ev Ting and UFC, WEC veteran Kamal Shalorus. And it is one of the best match-ups of the entire weekend.

The reason the fight is so intriguing has to do with where both men are at this point in their careers.

At 27-years-old, Ev Ting (12-3) is still quite arguably teetering on the status of “prospect”. He has fought and beat some of the very best featherweights overseas, namely Eric Kelly and Edward Kelly. Early on in his career he also took out Will Chope. Since joining ONE he has gone 6-1, only losing to current, undefeated featherweight champion Marat Gafurov.

At 39-years-old, Kamal Shalorus (9-4-2) has competed in some of the very best promotions in this sport. Starting out with the WEC, graduating to the UFC, and now taking his talents to ONE Championship. He was released from the UFC in 2012 and signed with ONE Championship a year later. Making his debut in mid-2013, Shalorus has only fought three times in the promotion, going 2-1 in the process. He took out current promotional lightweight championship Eduard Folayang in his debut, and then went on to beat Canadian Ariel Sexton. In his most recent outing, which took place way back in 2014, he was submitted by submission wizard, and then champion, Shinya Aoki.

The interesting part comes when you delve into both men’s experience in mixed martial arts. Ting has won 12 of his 15 professional bouts. Shalorus has won 9 of his 15. They have equal experience, but when looking at records, Shalorus has fought some of the very best. Rafael dos Anjos, Khabib Nurmagomedov, Jim Miller, Dave Jansen, and Jamie Varner are just some of the names.

So despite losing, Shalorus has still fought and had to deal with some of the best. He has had to go into a training camp knowing that he was fighting one of the best lightweights on the planet. Multiple times. Ting may have a much prettier record. But it still leaves more questions rather than answers. Not to mention the fact Ting is moving up to lightweight for the first time!

A win over Shalorus would be a huge one for Ting. The question is; Will Ev Ting be ready for this jump in competition? Because this is by far his best opponent to date outside of Gafurov. Another question; How will an aging Shalorus look as he enters this fight off of a two and a half year layoff? There’s no telling. His longest career layoff before this was just about one year following his release from the UFC.

So many questions. And so many ways this fight can play out. If you’re an MMA fan, you might be foolish to miss this one.

For those interested; here is the rest of the card.