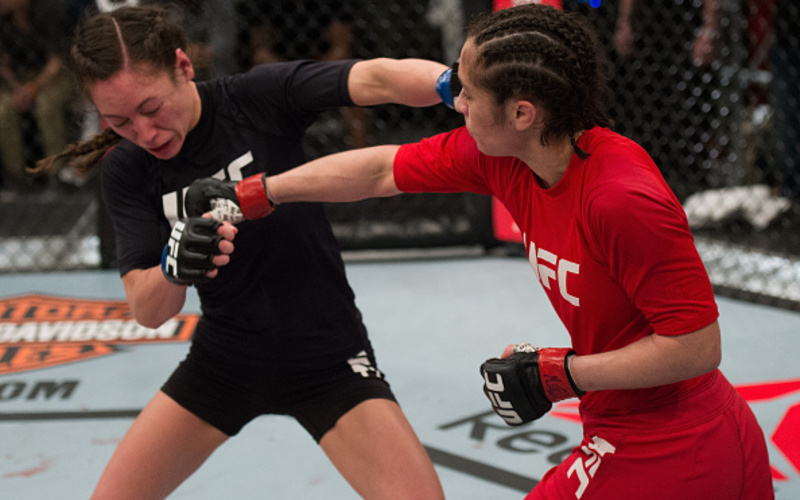 March 25 will be a special day for Ashley Cummins for a plethora of reasons. Not only will she make her long-awaited return to the cage when she takes on Amber Brown at Invicta FC 22, but she’ll do it at a new weight class in front of her friends, family and teammates.

Cummins has left all of the game-planning to her coaches and hasn’t watched a single second of any of Brown’s fights. That’s not to say that she’s taking her opponent lightly; it’s quite the opposite, in fact.

“It sounds like [Brown’s] very well-rounded and it’s going to be a tough fight,” Cummins told MMASucka. “Any fight in Invicta is going to be tough, because they don’t want any scrubs in there. I’m ready for a war.”

The 29-year-old Missouri fighter is chomping at the bit to get back into an MMA scrap, as she hasn’t fought since June. As soon as Invicta approached her about the Brown fight, Cummins took the opportunity instantaneously.

“I said yes in a heartbeat without even knowing who I’d be fighting or how much money I’d be making,” she said.

Even the fact that the fight was on four weeks’ notice did not bother Cummins, who had been staying busy with her training in hopes of finding a fight. She was disheartened when no promotion could find her an atomweight opponent.

Then, as Cummins described it, her manager called her out of the blue, telling her that Invicta wanted her to fight on their March 25 card in Kansas City, MO.

“I was like, ‘That’s four weeks away, but fuck it. I’ll get to fight one of the top atomweights in the world. Let’s do this shit.’”

So, what led Cummins to want to drop down to atomweight? She started off well in her professional career at strawweight, compiling a 3-0 record. She then hit a roadblock in the form of Joanne Calderwood, Emily Kagan and Alexa Grasso, who have all fought in the UFC’s 115-division. The common denominator was that Cummins was constantly fighting women larger than her.

“After my Ultimate Fighter fight, I told myself, ‘I’ll never fight at strawweight again,’” Cummins said.

In Season 23 of The Ultimate Fighter, Cummins lost her fight to get into the house when Lanchana Green completed a comeback and won via second-round TKO. Considering the size of the women she was competing against, Cummins did well just to get the opportunity to fight on TUF.

“My wake-up call was when I went out to Vegas for The Ultimate Fighter, and out of the 80 girls that tried out for TUF, I was the smallest one in the room,” she said. “I was like, ‘This is not good. I need to be at 105.’ I got my act together and started walking around 10 pounds lighter. Now, I’m definitely at the weight where I belong.”

Erion Zekthi, Cummins’ teammate at Wolves Den Training Center and fellow professional mixed martial artist, believes that the Invicta fighter will look at her peak in her atomweight debut.

“She’ll be surprised how light the girls at atomweight are compared to strawweight,” Zekthi said. “She’s had a 10-year long career in a weight class that she should’ve never been in and competed against some of the top women in the sport. Now, she’s in the weight class she belongs at. She’ll look fantastic.”

Cummins is also expecting to be at her best in her natural weight class, citing that she feels a lot stronger and faster while training at a lower weight.

Originally, when Cummins told Invicta she wanted to make the drop from strawweight to atomweight, the promotion fully supported her decision, but wanted to see her win a couple of fights outside of the promotion to prove that she could compete well at 105.

Cummins’ management wanted to see how she would fare at a 110 lb. catchweight before making the drop to 105. That led Cummins to a Bellator bout with Nicole Smith last June. Cummins won the fight via a second round knee-on-neck choke, one of the rarest submissions in mixed martial arts.

Cummins believes that her award-winning submission was a part of what earned her the call back to Invicta before completing the atomweight bout the promotion wanted her to take. She also asked her manager to email Invicta to tell them that she would be more than happy to take a short notice bout at atomweight, which she believes held favor with the promotion brass.

Upon getting the call back to Invicta, Cummins was ecstatic that she’d once again fight under the promotion that helped cultivate her professional MMA career.

“It’s such a great promotion,” Cummins said. “Shannon Knapp and Julie Kedzie treat us so professionally. It’s like the UFC for females.”

Cummins is on a multi-fight deal with Invicta, and will strive to achieve her dream of winning Invicta atomweight gold. After putting a decade of her life into the sport, Cummins wants nothing more than to keep climbing the ladder at 105 and challenge for the belt.

“I want that belt more than anything.”

Her journey for it begins in less than two weeks.