It has finally happened. One of the most exciting fighters in the sport has signed with the UFC. Justin Gaethje will finally enter the “big leagues” ranked as the #10 lightweight in the world on the MMA Sucka staff rankings.

Justin Gaethje (17-0) had been a mainstay of the WSOF organization since WSOF 2 in 2013. After three wins over solid names like Brian Cobb and Gesias Cavalcante, Gaethje was put in an inaugural lightweight title bout vs. Rich Patishnock at WSOF 8. The sixty-nine-second brawl ended with Gaethje getting the KO.

Since winning the belt in January of 2014, Gaethje has defended the title five times with five knockouts. He has had six fights total since the title win, though. At WSOF 15 he was set to defend his title against UFC, TUF veteran Melvin Guillard before the challenger missed weight. The fight continued, but no longer as a five-round title bout. It would instead be a typical three-round non-title fight. Gaethje won the fight on the judges’ scorecards. That was only the second time in seventeen fights that Gaethje had gone the distance.

Along with being a finishing machine in WSOF, he was also the most exciting fighter on the roster. Consistently giving us brawls with names like Luis Palomino, Luiz Firmino, and Brian Foster.

@ufc Lets C one of the "big league boys" put me to sleep. I want the scariest lightweight possible first. This 0 has to go! Contract signed

Gaethje has made it clear he wants no “gimme” in his UFC debut. He is targeting the very best. Before we get into the five potential opponents, let’s take a look at the Top 15 contenders in the lightweight division.

There are the Top 15 lightweights in the world – according to the UFC. Didn’t bother to include the divisions lightweight champion, because Conor McGregor has zero interest in defending the title anytime soon, sadly. This makes the division and its extensive list of contenders quite foggy.

I have handpicked five opponents that would match-up well with Gaethje in his debut. Three of the names are featured in the rankings above, the other two are not. 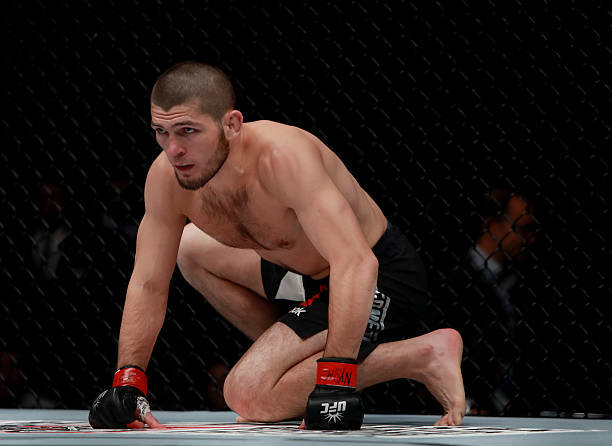 Yes. On paper, this seems like a very steep up-step for “The Highlight”. However; is it really, though? Numagomedov, according to the UFC, is the #1 contender for the UFC lightweight championship. And has been for a while.

But when it comes down to it, in my opinion, as well as many other people’s opinions, Tony Ferguson is the rightful owner of that “#1 contender” title. Based on activity alone.

The fact of the matter is; Khabib Numagomedov has two wins in the past three years. One of which was a debuting, late-notice opponent in the form of Darrell Horcher. The other was over the current #6 ranked Michael Johnson.

Justin Gaethje might be taking a big step-up if he were to face Nurmagomedov, but, statistically, it’d be a very intriguing one. Khabib Nurmagomedov is known for his smothering, brutal, and dominant grappling attack. With a heavy top game, he takes people down and keeps them there. That might seem like he’d have no struggle with the in-your-face style of Gaethje, but let’s not forget, Gaethje has a legitimate wrestling background. He just uses it in reverse. And with the ability to potentially defend the takedowns, he has enough power in his hands to take out anyone.

Would Gaethje win? Who knows. But if he was able to put on a solid performance against a name like Khabib Nurmagomedov in his debut fight, he’d almost certainly be a mainstay in the lightweight Top 5 for a long, long time. I know it’s a long-shot, but it’s a very welcome one. 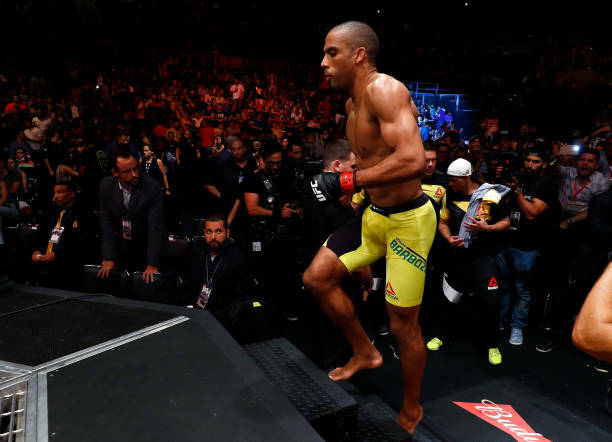 Just imagine the chaos this fight would bring. Though far more technical about it, Barboza likes to stand and sling heavy shots at his opponent, much like Gaethje. Whether it be winging punches, devastating leg kicks, or brutal counter-knees, Barboza can put any man on the planet to sleep with any one of his eight limbs.

The Brazilian is on a role right now. After a losing effort vs. Tony Ferguson in arguably the best fight of 2015, Barboza has since won three-straight. He followed up dominant decision wins over former world champions Anthony Pettis and Gilbert Melendez with an absolutely devastating KO over Beneil Dariush.

Barboza is primarily known for his deadly leg kicks. Justin Gaethje also does a great job mixing leg kicks into his devastating attack. In fact; last year he made the 4th defense of his WSOF lightweight title by stopping Brian Foster in the first round using leg kicks!

How would the #5 ranked Edson Barboza match up with a guy like Justin Gaethje, though? A guy who is seemingly unfinishable. A guy whose forward and in-your-face movement is seemingly unstoppable.

The fight would almost certainly be contested on the feet for however long it would last, and it is, on paper, the best fight of the night on any card it is put on. It would be action packed and would be a good measuring stick for both the veteran Barboza as well as the newcomer Gaethje. 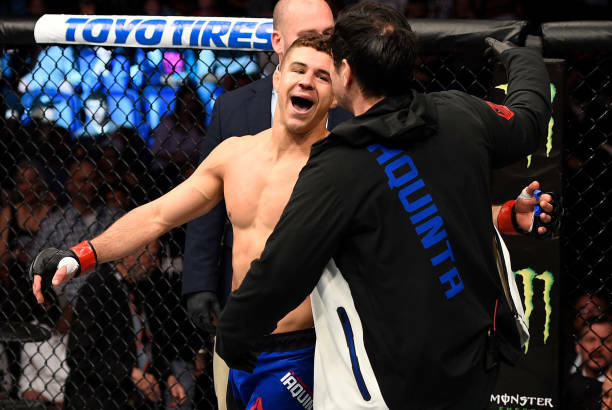 Al Iaquinta has been no stranger to letting the world, and the company, know how he feels about the UFC lately. Just check out his twitter and you will understand.

Sadly, it’s not clear when, or if, we will see Iaquinta fight in the UFC again. This is made even more unfortunate when you acknowledge the fact that Iaquinta just returned to action a couple weeks ago after two years away due to injuries as well as the pre-existing issues with the promotion.

However, in a perfect world, everything comes together and makes this fight happen.

Iaquinta is quite similar to Gaethje in some aspects, really. He is very much an aggressive striker who relentlessly goes in for the kill when he senses he has hurt an opponent. Of his current five-fight win streak, Iaquinta has won four via (T)KO.

He returned to action at UFC Nashville and knocked out UFC, TUF veteran Diego Sanchez in under two minutes. During his current streak, he also beat two other UFC & TUF vets in the form of Ross Pearson and Joe Lauzon. Iaquinta also holds a win over current welterweight contender Jorge Masvidal.

The hypothetical Iaquinta vs. Gaethje match-up has all the potential in the world to be a barn-burner. Two guys who are all about meeting in the center of the octagon and throwing bombs until the other falls. And, along with the similar offensive attack, both guys have very good and reputable chins, as neither guy has been finished via (T)KO.

It’s honestly hard to even imagine how this fight would play out. The two guys are so similar in their approach to fighting that it’s almost impossible to predict. For that reason alone, let’s see it! 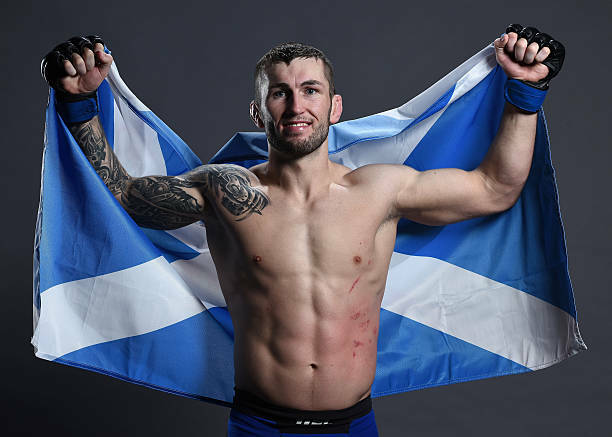 Now we get into the unranked fighters.

Scotland’s Stevie Ray isn’t like the other fighters on this list. In the sense that he isn’t really predominantly known for any specific ‘thing’. He is great at everything.

At first glance, most would probably refer to Ray as more of a striker, despite the fact that he has eight wins by submission compared to six by (T)KO. He can really do it all. When the fight hits the mat, his opponents should be wary of his chokes, though he is also quite good at locking in that armbar and forcing the opposition to tap as well.

The one thing that “Braveheart” noticeably struggles with is his takedown defense, but, let’s be real, would that even be a concern against a guy like Gaethje?

Though he is more than competent on the ground, it’s not super common to see Ray initiate the takedowns in his fights. So it’s not too crazy to assume a potential Gaethje clash would be mostly contested on the feet.

The two are not very similar stylistically when standing. Gaethje is far more about throwing everything he has into everything he throws, whereas Ray has a more calculated style in which he tends to pick his shots a bit more, as well as fight on the outside when he can.

So due to the different striking styles, this would be an incredibly intriguing debut for Gaethje, while also being a massive test and opportunity for Ray.

Ray, much like Iaquinta, last competed at UFC Nashville. On the prelim portion of the card, he took on Joe “J-Lau” Lauzon. Ray showed some incredible durability in what wound up being a pretty fantastic fight.

Lauzon was dominant early on, but the second he began to fade around the halfway mark of the contest, Ray completely took over and gave Lauzon hell.

For a fight with so many variables, it’s hard to imagine Gaethje vs. Ray not being an incredibly compelling watch if it were to go down. 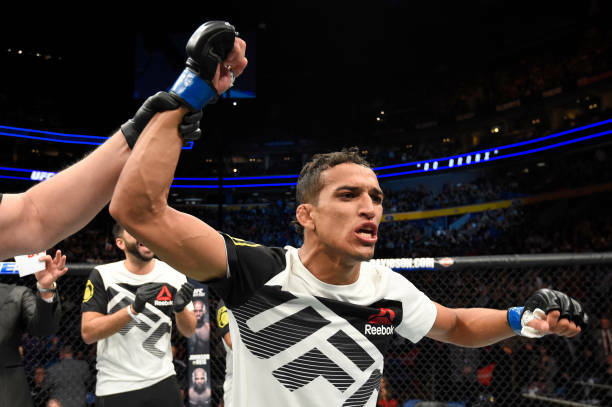 Brazil’s Charles Oliveira may not be ranked, but he probably would be if he could just get his weight issues under control.

He is mostly known for his fights at featherweight, despite the fact he regularly cannot make the 145-pound weight limit for the division as of late.

In his most recent outing, he went back up to lightweight and ran through former Bellator MMA lightweight champion Will Brooks in under three minutes. There’s no telling whether or not he will stay at lightweight or if he plans to continue to attempt to make weight as a featherweight. If he decides to continue to test himself in the lightweight division, a fight with Gaethje could be a fantastic test.

“Do Bronx” has some of the best grappling in the promotion today and is known for his incredible submission-ability. Whether it be an anaconda choke, a triangle choke, a standing rear-naked choke, or an incredibly rare calf slicer, Oliveira can submit the opposition from any position.

This is why a potential Gaethje meeting is so interesting. They could not be more different fighters. And, unlike most grapplers, Oliveira is not only a threat when the fight hits the mat. He has been more than willing to jump for guillotines, pull guard, or jump onto an opponent’s back while standing.

The thought of a Gaethje vs. Oliveira bout is intriguing due to the fact it is the type of fight where both guys’ gameplan could not be more obvious. It’s just a matter of who can impose that onto the other. It’d be interesting to see, and it’d be another test for Oliveira while being a potential stepping stone for Gaethje. as he fights a veteran who has fought some of the best lightweight and featherweight fighters the UFC has to offer.

There you have it. Five fighters who, in my opinion, would make the most intriguing match-ups against Justin Gaethje upon his UFC debut.

One thing you must remember is, none of these are too outlandish. Gaethje enters the promotion in a similar spot to fellow reigning WSOF champion Marlon Moraes, and Moraes is slated to face #3 bantamweight Raphael Assuncao in his UFC debut at UFC 212.