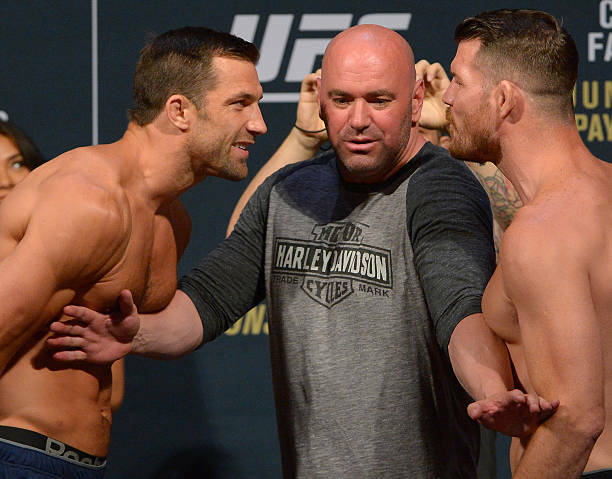 UFC President Dana White bristled during a recent interview when discussing comments by UFC middleweight contender, and former champion, Luke Rockhold. The comments from the 185 pounder, which criticized a proposed middleweight title fight with Georges St. Pierre, where clearly interpreted as misguided, entitled, complaining over other fighters being rewarded with undeserved title shots. However, from a fighter, or even a fan perspective, Rockhold makes a valid point that deserves some attention. It’s a shot across the bow of the USS busines-a-usual on the volatile sea of shareholders.

The dust-up began during a recent Fox Sports interview with the promotions president at the UFC 211 post-fight press conference. “There’s a lot of guys talking about ‘deserve’—nobody deserves anything. You’ve got to earn it here. You’ve got [Luke] Rockhold screaming right now ‘I deserve this’. You just got knocked out in the first round. You’ve got to come back and earn it,” White said. He would continue his no non-sense thoughts when he said, “The guy just got knocked out in the first round by Michael Bisping and he thinks he deserves this and he deserves that. You earn it. You want to come back and you want to fight for the title? Get back in here and earn it. That’s it.”

Rockhold, responding to what he obviously perceived as an attack that painted him as a bit of a whiner, took to Twitter to clarify his recent statements by saying:

@danawhite I never said I deserved a title shot. I said we (middleweights) deserve clarity. We deserve something to fight for.

Granted, his follow-up tweet was probably not the best way to solicit a positive response from his boss, but he’s not exactly wrong here either:

@danawhite “You have to earn your way in this company”? Tell me how did GSP earn a middleweight title shot? Think before you run your mouth

Despite the obvious and inevitable argument that Rockhold isn’t revered as a mega-star, like St. Pierre, the glaringly obvious issue Rockhold is touching on is one that separates MMA from other mainstream professional sports. There is no clear-cut path for fighters to follow on their way to a UFC title shot, and ultimately a championship belt.

The UFC has no playoffs, no brackets, no points race, no ladder of achievement to climb on the way to the top. It’s a problem that frustrates both fighters and fans alike. Regardless of how hard a fighter works, how many wins he or she strings together, defeating technically superior opponents, or current position on the rankings chart, they can still be left out of a title-shot conversation in favor of whomever can deliver more PPV buys. All but the most unreasonable fans understand that the UFC is in the entertainment business, not the fairness business. However, true MMA fans clearly hold fair sportsmanship, and performance-based opportunities in high regard. So while watching guys like CM Punk take a beating for piles of cash is admittedly amusing to watch, it’s ultimately annoying.

For fighters, the grueling work they put in to grind their way up in the rankings for the ultimate goal of a belt can feel like a pointless endeavor when they’re skipped over for a more favored peer. This seems likely to demoralize fighters, alienate fans, and become a core ingredient in a recipe for losing talent, and viewers, to competing MMA promotions.

While this seems like a fair and consistent system, it’s just never going to happen in a promotion like the UFC, where the almighty dollar reigns supreme. The UFC will first have to absorb some consequences for allowing fighters to arbitrarily jump weight-classes for immediate title shots based on popularity or potential for huge paydays.

The phenomenon I like to call the “McGregor Effect” has become the rule instead of the exception. MMA fans long for the days when fighters were willing to grind it out for a shot at a title against the best of the best after finishing all other contenders. Now the trend seems to be demanding only “money fights,” or refusing to accept fights with higher ranked contenders that are deemed unworthy. It seems the only way to reverse this trend is to get MMA fans to stop buying PPVs, and tickets to events, that feature championship bouts with any fighter other than the current number-one contender in any given division. Good luck with that.

Perhaps at some point the UFC will find a way to balance the scales, but until then at least guys like Rockhold have fans, fighters, and promoters all talking about an issue that needs to be dealt with. Way to use “The Force,” Luke.