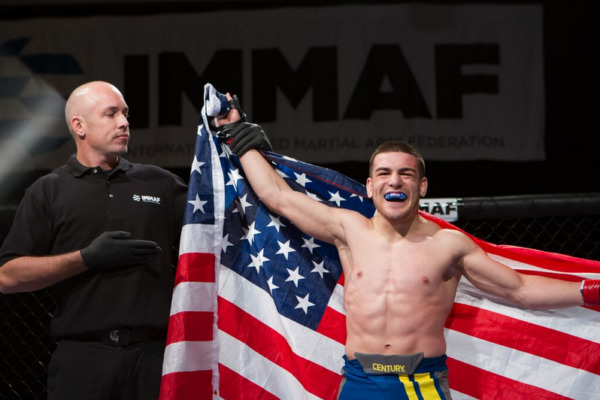 Three of MMASucka’s Top 40 prospects fought this weekend, and all three were victorious including elite prospect Jose Torres who became a two-weight world champion in Titan FC.

Jose Torres has been a professional for just over a year and has already claimed two world title in two different weight classes. Torres (already the Titan FC Flyweight champion) moved up to the Bantamweight division and dominated Farkhad Shapirov to win his second title.

Only five fights into his career Torres might already be on the doorstep of signing with the UFC if he hasn’t already.

At only 24 years old, Torres turned pro after a long unbeaten streak as an amateur. Torres trains at KHK Fight Team in Bahrain but also in Colorado with TJ Dillashaw. He should be in the UFC very soon.

It’s still unclear whether or not Amir Albazzi has signed with Bellator or was just fighting for the promotion this weekend, but regardless he certainly made an impression with his one-sided victory against Jamie Powell.

Albazi just might be Sweden’s best prospect. He’s a highly-accomplished grappler who turned professional at 16. Now 10-0, Albazi had finished all of his opponents up until taking Powell the full distance, but it’s about time people start recognizing “the Prince.”

This was Albazi’s first fight as a Flyweight.

Now 9-0 with a knockout over a UFC veteran, bigger promotion may start looking at Ankalaev. He currently fights in the Akhmat Fight Show.

With the win over Prado, Ankalaev advanced to the semi-finals of the WHCA Middleweight Gran Prix. He won the promotions Light Heavyweight gran prix last year.

Ankalaev is one of the most talented Russian fighters out there. If he wins this gran prix, there is zero doubt he won’t be signed to the UFC or Bellator by years end.

It was only a matter of time before BFL Heavyweight champion Arjan Bhullar got the call to the UFC. The former Canadian Olympic wrestler signed with the promotion early last week.

Another Canadian prospect who could follow in the footsteps of Bhullar is Hakeem Dawodu. Dawodu is a great striker who has fought his entire career under the WSOF banner. Ever since he made his debut in 2014 many expected big things of him.

With the UFC coming to Alberta, Canada (Dawodu’s hometown,) in September, signing Dawodu makes all of the sense in the world.