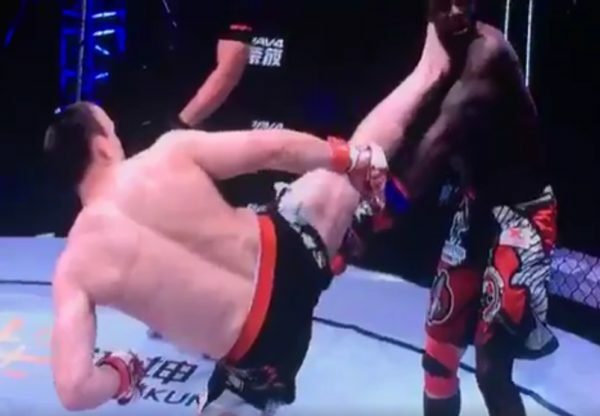 “The Young Assassin” Melvin Guillard brought his 32-17-2 record overseas for the first time this morning. He took on the “King of Kung Fu” Muslim Salikhov (12-1) at Kunlun Fight MMA 12.

Salikhov earned his 9th finish in-a-row, and easily his biggest to date. Winless since 2014, Guillard was knocked out cold with a vicious spinning back kick KO. Knocking out the UFC, TUF, Bellator and WSOF veteran improved the Russian’s record to 13-1 w/ 12 finishes.

Also worth mentioning: Guillard was eleven pounds overweight for what was set to be a welterweight contest. Check out the nasty KO below via Twitter user @nbwanglei.

Check out the highlights of the fight, and stay tuned right here at MMA Sucka for more live streams as well as videos highlighting the top fighters, commentators, coaches, promoters and other names in mma and combat sports.  You can also subscribe to our youtube channel for regular updates and all the latest fight news. You can also check out our sister site, at TheFightBuzz.com for the latest from the world of mma and other combat sports.