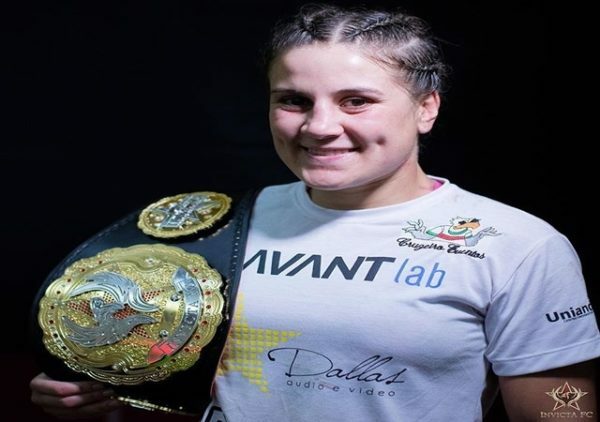 Jennifer Maia is the current Invicta flyweight champion. Yet not much is known about her here in the US. She hasn’t done much press here since she lives in Brazil, and only speaks Portuguese. As a person currently studying Portuguese, and a fellow Invicta fighter, I decided to reach out and interview her. I respect this talented fighter so much for her honorable attitude (after beating me by split-decision in a title defense last September). The MMA community in the US needed to know more about the best flyweight in the world.

Maia was born and raised in Curitiba, Brazil–and still lives there today. Currently training out of Chute Boxe Academy, the twenty-eight-year-old sports a record of 14-4-1, and is ranked number one in the world in at flyweight.

How did she get started in martial arts? Maia told me that she has always liked sports in general, and plays all different kinds. “At my school where I was doing bodybuilding, they started muay thai classes. My friends convinced me to participate. I fell in love with it after the first class and never stopped,” she said. Eventually Maia participated in boxing and muay thai competitions (while also training in Brazilian jiu-jitsu as well),  and then made her professional boxing debut in 2008. Maia went 3-0 during her stint as a boxer. However the lure of MMA became hard to deny. “Seeing that MMA was more popular, I left [boxing] for MMA.”

In 2013 she had her first fight in America at Invicta FC 5 against Zoila Frausto, which she won by decision. After three years Maia would earn the promotions title when she defeated Vanessa Porto in March of 2016. It was actually the second time she faced Porto, avenging an arm-bar loss back in 2011. She then defended her title against me in the aforementioned fight from last year.

Nowadays, besides training for fights, she makes extra money by teaching muay thai and jiu-jitsu classes for women at Chute Boxe. Maia holds a black belt in BJJ. “They are really cool classes,” she said. “Women feel more comfortable training jiu-jitsu with a female teacher. They like my teaching and also fall in love with jiu-jitsu.”

I was curious about Brazilian cultural opinions of females in fighting sports, so I asked her about discrimination. “At first I had a little problem with discrimination because people thought it was not a sport for women, and my family thought that I didn’t have a future in MMA,” said Maia. “But overtime I was able to prove that it made me happy, and I could survive in that environment.” 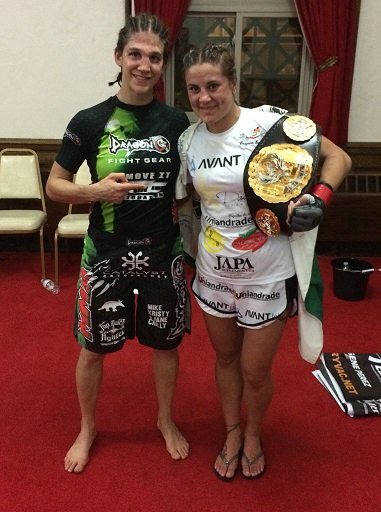 She has come a long way, and reached some notable heights in a short time. “My greatest accomplishment is becoming the Invicta champion, and number one in my division,” says Maia. “It’s the realization of a dream. I had been a fan of the event, then I became an Invicta fighter…my eyes brightened when I first saw the Invicta belt, and I thought, ‘One day I’ll have that belt,’” she said. Going from viewer of the sport, to a star in it is a feat not lost on the Brazilian. “I went from a fan to suddenly getting to see it from the inside. I’m proud to be a part of this very well-organized event,” says Maia.

However, Maia still has plans for the career she has ahead of her. “My goals are to make beautiful fights, to be recognized around the world, and to continue to be champion,” she said. Regarding the UFC starting up their own flyweight division, Maia says, “I’m happy they did. It’s another place for us to show our work, and I hope I can be among the best in the UFC, as well.”

In her free time, spending time with her loved ones is important. “I like getting together with family and friends, and having barbecues,” she said. She also enjoys a delicious meal, “I love pasta. After weigh-ins, I like to eat some kind of macaroni.” If you visit her Instagram account you’ll see it adorned with photos of her pet bulldogs. “They are like my children,” she said. “They always welcome me with great joy when I arrive home after a tiring day.”

Maia is growing in recognition in her home country, soon this talented fighter will gain even greater notoriety in ours in the years to come.