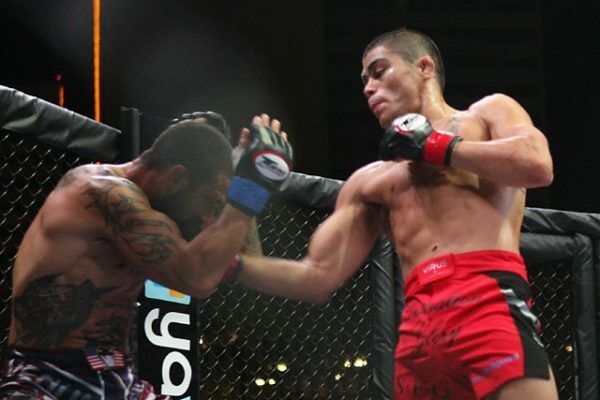 Armed with his passion for the sport of MMA, UFC-hopeful John Castaneda is a tough-out for anyone at bantamweight. That includes his next opponent of course, Cheyden Leialoha. The two will square off on August 1 at Dana White’s Contender Series 4 with a potential UFC contract on the line.

Castaneda, 13-2 as a professional, has the chance to make a dream come true with an impressive win over Leialoha in an opportunity that he was able to attain only by passing up another.

“I had the opportunity to start a full-time career in the criminal law field,” the 25-year-old told MMASucka. “I have such a deep passion for the sport and I don’t see that changing whether or not I get a contract this Tuesday. The passion I have for the sport is beyond me.”

Castaneda graduated from Minnesota State University, Mankato, with two degrees; one in Criminal Law and the other in Spanish. It was during his collegiate career that he discovered the sport that he now calls his full-time job.

Castaneda was a member of the school’s wrestling team in his freshman year, but said that it was rough keeping up with the demands of being a full-time student and a college athlete.

“It was so much time out of your day, and you weren’t allowed to take schooling seriously,” he said. “You were only allowed to take 12 credits a semester [if you were a college athlete].”

Little did Castaneda know that his life would soon change forever.

“I got introduced to the MMA program,” he said. “I was training in high school and was doing some Brazilian Jiu-Jitsu. I was told by the MMA team that I could wrestle, and punch people in the face. I was like, ‘Hell yes.’”

From that point on, Castaneda upped his credits to 15-16 per semester, which all owed him to secure his two degrees in four years.

“It was a little bit of a challenge for me,” he admitted. “I had to put in classwork and homework time, but it allowed me to be a part of the MMA program. I still got to do what I loved, which is wrestle, and I got to focus more on schooling, which was my main concern at the time.”

Following a 15-1 amateur career, Castaneda began his professional career in September of 2012. He went 5-2 in his first seven fights, but after losing to the same opponent twice (Matt Brown), the Minnesotan made the move to the Minnesota Martial Arts Academy to train under Greg Nelson. “Sexy Mexi” has gone an undefeated 8-0 since making the camp change.

That may not bode well for Leialoha, who is also an undefeated prospect at 6-0. Castaneda acknowledged that his next opponent has trained with UFC featherweight champion Max Holloway, but said that he is not impressed with Leialoha’s “accomplishments and credentials.”

“[Leialoha] has fought absolutely no one with a winning record,” Castaneda said. “He’s beaten guys in cool fashion, but he’s not beaten guys with a lot of experience. He’s really just fighting guys who are making their pro debuts, or on losing streaks. I’ve beaten guys at the highest level, who have been there at the UFC.”

Castaneda spoke accurately in his assessment; in Leialoha’s professional career, none of his six victims went into the fight with a positive record.

He also wasn’t lying when he said that he’s defeated UFC-caliber opponents. In his most recent outing, he scored a second round TKO victory over former UFC bantamweight and flyweight Chris Beal. Castaneda said that wins over opponents like Beal gives him the mental edge over the Hawaiian Leialoha.

“The match-up for me is advantageous because I’ve more than likely seen someone in the cage with Cheyden’s skills than he’s seen someone with my skills,” he said. “I can pretty much guarantee that.”

Don’t mistake that for overconfidence, though. Castaneda said that he’s well aware that Leialoha is “going to be tough,” and that he’s a good fighter.

After 15 professional bouts and 16 amateur, Castaneda said that MMA has become second nature for him.

Now, all that’s next on the proverbial to-do list is defeat Leialoha in a fashion impressive enough to earn the attention of Dana White, and he believes he knows just how to do that.

“I have to go out there and fight how I normally fight,” Castaneda said. “I’m an exciting fighter. My last three fights have been stoppages over good fighters. You don’t necessarily have to finish, but you have to perform at a high level.”

He’ll look to do just that on the biggest stage to date of his budding career.