Three fighters moved onto the tournament quarter-finals, but the addition of a new fighter was announced, and it’s a very exciting one!

Pancrase Bantamweight King; Shintaro Ishiwatari (22-6-4) has been announced as the latest participant in the RIZIN Grand-Prix.

No fights are confirmed for “Bracket B” of the tournament which takes place in October, but the fighters involved should start to be announced shortly.

Ishiwatari has won four-straight, and in his most recent outing two months ago he decisively beat Rafael “Morcego” Silva to defend his bantamweight title.

Part of his current four-fight run includes a TKO win against Takafumi Otsuka, who advanced to the Grand-Prix Quarter-Finals last night. In 2013, Ishiwatari had a five round battle with Kyoji Horiguchi before he was eventually stopped in the fifth and final round.

He has long been considered one of the best fighters in Japan, and now he has the chance to further prove that when he joins the RIZIN Bantamweight Grand-Prix.

“Bracket A” Fighters Headed to the Quarter-Finals

Three fighters earned wins last night and moved onto the RIZIN Bantamweight Grand-Prix Quarter-Finals. None of them disappointed, here is a rundown of who we’ll see move further in the tournament.

In the night’s main event, world-class flyweight Kyoji Horiguchi took on one of Japan’s most all-action veterans Hideo Tokoro.

It didn’t take Horiguchi long to get the job done. He needed about 90 seconds to drop Tokoro with his top-notch boxing attack, and when he followed Tokoro to the floor, Horiguchi made sure there was no chance he got back up.

Kyoji put the stamp on the fight with nasty ground-and-pound shots as he put Tokoro to sleep.

In the night’s unofficial “Fight of the Night”, Takafumi Otsuka and Anthony Birchak battled it out for 15 minutes in a fight that could have legitimately gone either way.

Otsuka survived an early punt to the dome and was virtually unphased. Throughout the fight he and Birchak both landed some solid shots on one another, and takedowns were scored on both ends when they needed to be.

The longtime DEEP Champion took home a narrow Split Decision win against Anthony Birchak. For fans in the know, Otsuka has been incredibly underrated for quite some time, and now we get to see if this tournament changes that!

It’s onto the quarter-finals for him where he will take on the Keita Ishibashi vs. Khalid Taha winner. Speaking of Ishibashi vs. Taha… 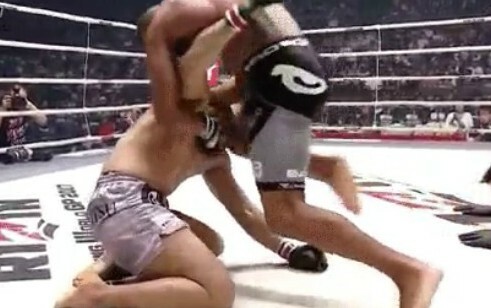 He finally got Ishibashi onto the mat and into a dominant position, and Taha proceeded to make the most of those RIZIN rules. He landed brutal grounded knees on Ishibashi before putting him to sleep with heavy punches.

Taha gets the last-second KO and moves onto the quarter-finals where he will take on Takafumi Otsuka.