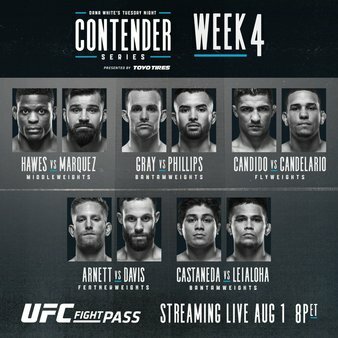 The midway point of the eight-week run of Tuesday Night Contender Series is here!

Last week we saw a solid show despite two of the five fights ending due to injury. Check out the results of last week’s card here. Two UFC contracts were given out after the event ended; you can check who received those contracts here.

Week 4 will be headlined by a middleweight fight between WSOF veteran Phil Hawes and Combate-alum Julian Marquez. It has been one year since Hawes last fought. He was submitted by Louis Taylor at WSOF 32. Marquez has won three-straight, all via finish, including an 82-second KO vs. Matt Hamill.

Check out the full card below which will be updated with live results as the event begins.